How to Use Motherboard HDMI with Graphics Card?

Need to hook up another monitor? If you’ve already maxed out your graphics card, why not use your motherboard’s on-board display? Here’s how to use motherboard HDMI with graphics card.

Do note that available connection types (for on-board graphics), which motherboards support, can vary and are not limited to just HDMI (High-Definition Multimedia Interface) and its iterations. In fact, VGA (Video Graphics Array) and DVI (Digital Visual Interface) outputs are more common in older motherboards.

Needless to say, the motherboard on-board graphics’ connection type must be compatible with what’s available in the monitor. Of course, adapters are out in the market in case you run into mismatching ports. Be aware, however, that these adapters can be hit or miss at times.

Moreover, not every motherboard comes with on-board graphics. Integrated graphics is almost a standard for recent motherboard releases. However, some motherboards, especially those of the older generation, does not have an iGPU, which requires the system unit to have a discrete graphics card so that it has a display output.

Furthermore, there are motherboards that have on-board graphics but its BIOS that does not support enabling the iGPU alongside a discrete graphics card in the AGP/PCI-Express slot. In cases like this, a BIOS update might be a necessity.

How to Use Motherboard HDMI with Graphics Card?

As per the above-stated explanation, you’ll have to go into the BIOS and enable the on-board/integrated graphics.

However, it doesn’t end there. In some cases, settings within the operating system (Windows 10) also need to be tweaked for the display to properly work.

Configuring iGPU settings in the BIOS

For this, you’ll have to shut down your PC and follow the steps listed below.

Normally, the BIOS key only needs to be pressed when the BIOS splash screen pops up. However, the instructions involve spamming the BIOS key right after the boot-up sequence since some motherboards may have enabled quick boot, which disables the splash screen, by default.

For Asus and Asrock, it’s usually under the ‘Advanced’ tab. BIOSTAR and Gigabyte normally have the setting under ‘Chipset’ or ‘Peripherals’. MSI files it under ‘Settings’. 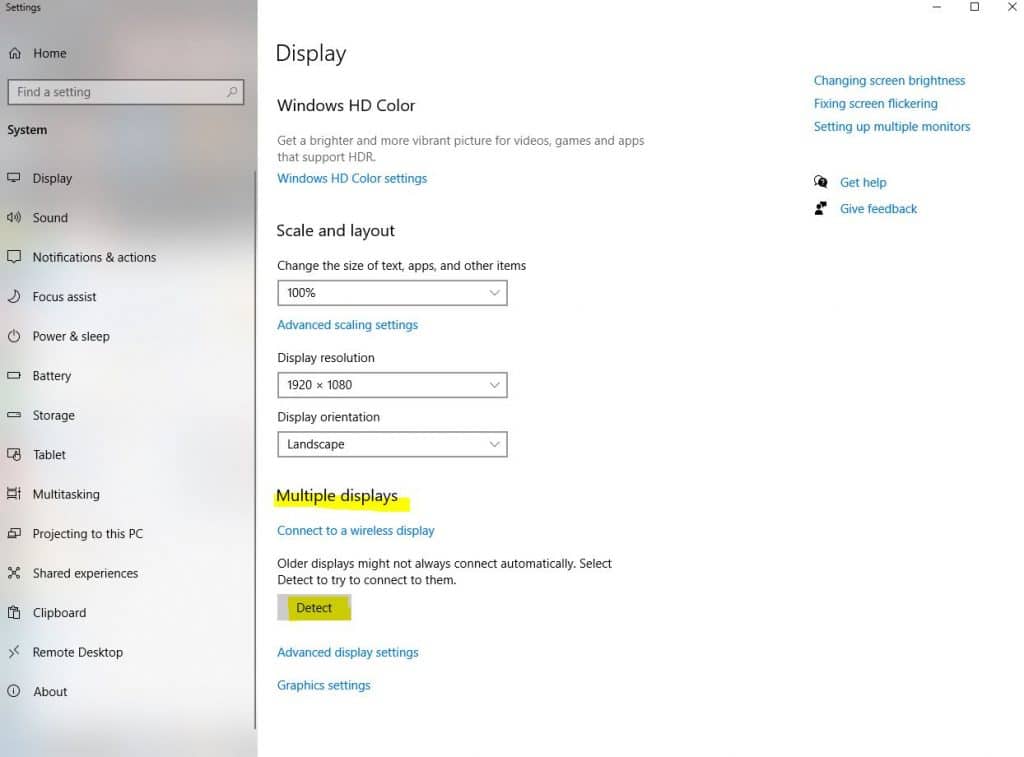 Note that you should only proceed with this if you’ve already enabled the iGPU settings within the BIOS and have hooked up the monitor to the motherboard’s display output. Also make sure that the iGPU drivers have already been installed. The steps that follow apply to Windows versions from 7 and 10.

For Windows 10, within the ‘Display Settings’ window, scroll down to the multiple displays section. While Windows 10 usually detects the addition of another display and adjusts the settings accordingly, there are times when it fails to do so.

Make sure that for multiple displays, either ‘Extend these displays’ or ‘Duplicate these displays’ are selected in order to verify if the additional monitor hooked up via the on-board graphics works as intended.

The Windows display utility for 7 and 10 allows for the resolution on each monitor to be individually adjusted. The orientation and order of the displays are also configurable across both versions.

Albeit, Windows 10 offers more convenience as it allows the user to just drag and drop the monitor icons according to his/her preference.

Off-Loading to the iGPU

Both Intel and AMD’s integrated graphics offerings will have no problem powering displays at 1080p. In fact, the recent iGPU releases from both companies can run some games at 60 FPS. Of course, the AAA titles, which even mid-end discrete GPUs have trouble running, are impossibilities for the iGPUs.

Having an additional monitor powered by an iGPU is actually ideal when you’re running on a low-end to mid-end discrete graphics card with limited compute cores and memory size.

While the additional display may only be intended for browsing and streaming, having them running, especially on high resolutions, will eat up the GPU’s resources.

Moreover, most low-end GPUs can also limited by their I/O configuration, which may only allow for 2 display streams. In cases like this, using the iGPU to setup an additional display is called for. It’s just an overall better option over having a splitter.

Another instance where off-loading to the iGPU applies is when you have an AMD graphics card. Most graphics card from AMD cannot run a third monitor without having one of the displays outputted via a DisplayPort (DP) or an active HDMI/DVI-DisplayPort converter.

This write-up on how to use motherboard HDMI with graphics card highlights the benefits of utilizing what is already available but often neglected option.

Hooking up an additional display powered by the motherboard’s on-board graphics processing unit is a better route than going through convoluted solutions that involve splitters and adapters.

This option is something that most people either don’t know of or just haven’t tried.

Well, it’s possible and more PC owners should be doing this given that the graphics processing workload is within the limits of what the iGPU can handle.