What Is A Bridged PCIe Cable? – Learn Here

When building your computer, having a specific look is what most users look for. You can do this in a lot of ways, and one of the main things to consider is cable management. This is where bridged PCIe cables come in. Let’s see what is a bridged PCIe cable.

Graphics cards need a power supply, and some need even more than others, so much so that they require two PCIe cables. A Bridged PCIe cable refers to the two separate sets of PCIe power cables held together by a cable comb. This makes them appear like one single unit.

Bridged PCIe cables aren’t new. However, they provide a lot of utility for computer owners, especially when building or customizing your computer. They also come as part of cable extensions you can buy.

What Is A Bridged PCIe Cable?

If you have a computer and have at least opened it up before, you may have found a clutter of wires inside.

Cable management is essential not only for looks. It also facilitates better airflow which will play a critical role in keeping your PC running at good temperatures.

There are many ways to handle cable management, especially for power supply cables connected to the graphics card.

Depending on where the power pins on the GPU and the PSU (Power Supply Unit) are, you may have to do a lot of routing to connect the two.

Furthermore, the cables may be loosely connected or even not be long enough. These are some of the situations where bridged PCIe cables.

Also Read: How Many PCIe cables do I Need?

Understanding the problems they aim to solve will help you understand what is a bridged PCIe cable.

Initially, and even currently, People use zip ties for cable management. This often happens in areas where users can’t see like behind the case as it’s not such a pretty sight.

This becomes even trickier if you have multiple cables going to the same device. You would want them to be routed similarly for a better look and to make future operations on the device easier.

With a graphics card that takes a single power cable, you would use cable combs for this. Because they come in 6 or 8-pin configurations, you have 8 wires to keep track of even if they’re connected to the same terminal.

Cable combs became popular for this because they were much neater and you could easily have them even on display without having to worry about them breaking the device’s aesthetics.

Also Read: Does it matter what PCIe slot I Use?

What are Cable Combs?

These can be good for custom computer builds as they allow you to keep track of your cables. Essentially, they wrap the group of cables to ensure that they each travel together and make them easier to handle.

They are not something very complex when looked at in terms of PCIe cables. And, neither are bridged cables.

Also Read: How Many PCIe lanes does SATA Use?

Cable combs can be used on a single 8-pin or 6-pin PCIe power cable. However, some very power-hungry cards require two power cables. This is where the bridged PCIe cable comes in.

Technically, you can connect each power supply cable with a cable comb and they will be easier to manage. However, you will end up with two separate cables that won’t run exactly together or fit in with each other in an aesthetically pleasing way. 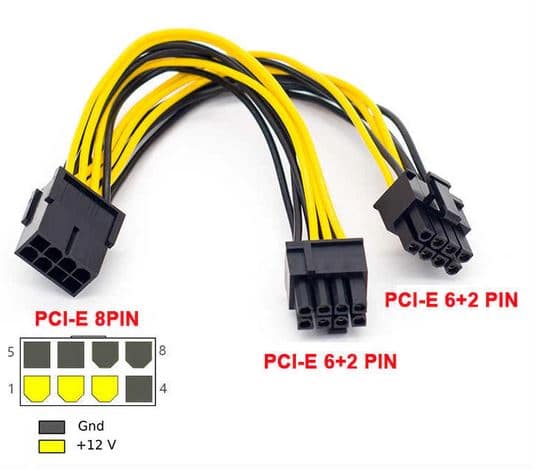 These are needed by cards that have very high power needs. Where a single cable can have about 8 power supply pins, this configuration will need two.

You, therefore, will need to have a cable comb that extends the length of both power supply cables side by side and lets you route them easily within your computer.

This will require you to have one 6-pin PCIe cable and the other will need to be an 8-pin cable. These will plug into different ports on both the GPU and the CPU and will provide slightly less power than the dual 8-pin connectors.

A bridged cable will let you get a fitting design to match this.

This is pretty much the same as the 6 by 8-pin profile. The main differentiating factor is with the card they plug into. To get the correct cable, you need to identify the exact position of your PCIe cable’s retention clip.

Bridged PCIe cables that combine 8-pin and 6-pin connectors cannot be turned. Therefore, if you get the wrong one, you’ll need to exchange it for the correct one.


These cables are popular because they help users solve cable management issues. They keep two connectors running together which makes them easier to manipulate and place. With enough cable combs running along their lengths, the two PCIe cables can be effectively routed within the case.

You also get the benefit of an aesthetic look. Bridged cables help builders achieve a cleaner look inside their case which will be ideal for displaying your hardware.

One way to have a clean PC build is using bridged PCIe cables.

If you’re wondering what is a bridged PCIe cable, it refers to two PCIe cables that are connected with a cable comb that extends over both.

This lets users work with the cables as if they were one single piece and this offers advantages for the overall build quality as well as the looks of the computer.

One drawback to watch out for is with a combination of 6 and 8-pin connectors, you will need to ensure you get the correct cable that matches your build.