Photo editing and photography is one of the most satisfying experience. However, in order to do proper justice to your craft, you need the right tools.

A decent enough computer is in fact a tool that you can use to master your craft on. However, what do you do if you do not have the cash to afford for yourself a high end editing PC?

Fortunately, you can balance your budget wisely and get yourself a decent enough desktop for cheap by making sure you understand which hardware components matter the most.

In this article we will look at some of the best budget desktops for photo editing and also talk about the important hardware components below. 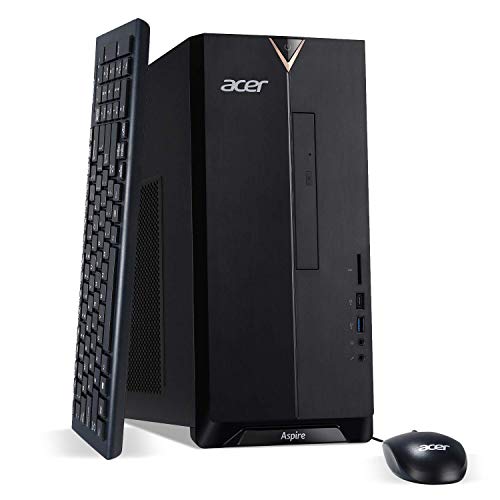 Acer Aspire TC-895-UA91 is one of the most recommended desktops if you are tight on a budget.

The reason we have chosen this model is primarily due to that fact that it features the Intel Core i3-10100 for very cheap.

This is latest Core i3 processor from the 10th generation. While in terms of performance both the Core i3-10100 and the previous Core i3-9100 are more or less the same, the current gen Core i3 features hyper threading.

This is, in fact, the first generation where the Core i3 processors are found to have hyper threading enabled. As such in multi threaded environment as well as for multitasking, this can prove to be better compared to the previous gen processor.

Also make no mistake in terms of gauging the performance of this processor. Despite it being a Core i3 processor, it is in fact much faster than an average low powered Core i5 found on laptops.

Hence for photo editing on a budget, this can be fairly great to use.

We do not recommend going lower than Intel Core i3 processors and venturing into Intel Pentium or Celeron processors. Their weak performance can cause your frustration in the long run.

Other than that, this desktop features a decent 8 GB of DDR 4 RAM, which in our opinion at this price tag is very reasonable. It also offers a 512 GB NVMe SSD. Having an SSD at this price category is something quite new.

This desktop does come with a wired mouse and a keyboard.

All in all, if you want a reasonably powerful processor at an affordable price tag, then this is one of the best budget desktop for photo editing in our opinion.

Popular performance based desktop with Core i5 10th gen processor.

Acer Aspire TC-895-UA92 is one of the best valued desktop to have been introduced last year and it still continues on to be very popular.

This is a rather affordable desktop that features the Intel Core i5-10400 processor. This is, by all means, an excellent processor suitable for fairly heavy duty photo editors.

Compared to the Core i3-10100 found in the previously mentioned desktop, this is slightly better but it features a higher core count.

For moderate levels of work, we cannot recommend this processor enough.

In addition to a mid range processor, this desktop features a good 12  GB of RAM and a decent 512 of SSD, similar to what the previous desktop offered.

In short, if you need a respectable processor, then this is one of the best budget desktop for photo editing.

Next up we have a popular and a rather high performance desktop from one of the best custom PC builders: Computer Upgrade King.

This desktop is more inclined towards those who use GPU accelerated features and effects on their photo editing software.

The processor featured here is the AMD Ryzen 5 PRO 4650G. In terms of performance this about significantly more powerful than the Intel Core i5-10400.

While this does not feature a dedicated graphics, it is ready to harbor one. It has everything there including a good 500 Watts power supply.

You don’t quite need a dedicated graphics card for photo editing anyways.

However, if you want to play online games like Fortnite, PUBG, LoL etc, then the integrated graphics card featured in this processor is exceptional.

The ‘G’ designation in the processor number indicated that it features the signature Radeon Vega graphics. These are far more powerful than the integrated Intel HD 630 found on an average Intel processor.

This particular model model features the Radeon Vega (Renoir) integrated graphics. Refer to the table below:

Other than that, this PC features a whopping 16 GB of high performance RAM operating at 3000 MHz and a decent 512 GB of SSD.

All in all, if you need a model that combines processing and GPU power, then this is the best budget desktop for photo editing in our opinion. 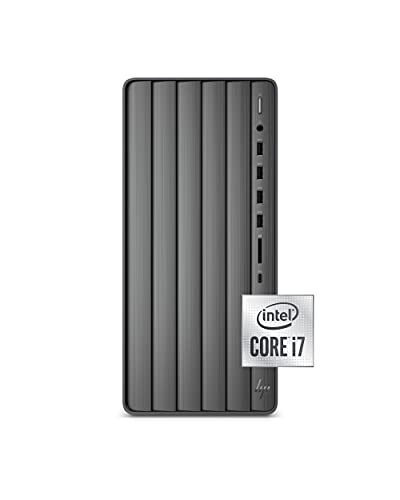 A workstation grade affordable desktop with Intel Core i7-10700.

This is not a budget desktop per sey, however, the definition of budget differs from person to person.

Sure this may not be the right one for you if you are a beginner, however, if you make a living out of your photo editing jobs, then you may actually find this quite affordable.

The reason we have selected this desktop is simple: it features a power Intel Core i7-10700 processor. When it comes to sheer performance, Intel Core i7 is the way to go.

However, not all Core i7s are created equally. Some are low powered as are found in laptops, other are performance based. This happens to fall in the later category.

The processor features 8 cores and a very high single core performance as well making it a no-brainer for those who are serious about their career in photo editing.

Besides that, it also features an ample 16 GB of RAM – which is considered a staple amount by professionals. On top of that, it also offers an excellent storage configuration.

The desktop features a large 1 TB HDD, which you can use for storing and archiving large files, and a 512GB SSD, which can be used for the OS as well as for the current projects and most used software.

So if you are looking for a high performance option at a reasonable price value, then this is the best budget desktop for photo editing in our opinion. 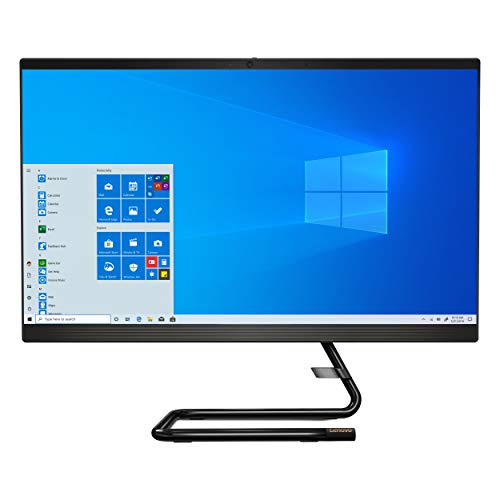 An All in One featuring the most popular processor of this generation i.e the Ryzen 5 4500U.

Finally, here we have something different. This is not your traditional tower desktop, instead this is an All in One machine.

That basically means that this is a PC that harbors all of the necessary hardware behind its screen. As such, this is an elegant, easy and relatively portable solution for your photo editing needs.

We have selected this model due to its value. All in One desktops can get quite expensive. This, on the other hand, maintains a decent price / performance value.

For starters, this comes with a 24 inch FHD screen with very thin bezels on the sides. It has a beautiful stand, built-in speakers as well as a webcam.

This is only marginally slower than even the Intel Core i7-10700T processor.

And the best part is that it does not cost much. It costs as any mid range mobile grade processor. Hence what you get here one of the best performance per dollar value.

For low-moderate levels of work, this should more than suffice.

Furthermore, it offers a decent 16 GB of DD4 RAM and a high 512 GB of SSD. It comes as a package with a wireless keyboard as well as a wireless mouse.

Hence, if you are looking for a complete package, then this is one of the best budget desktops for photo editing considering the fact that almost everything is paid for here.

Should You Go For a Desktop or a Laptop?

This is one of the most common predicament when choosing a PC for editing purposes.

Going for a laptop always seems tempting because of the portability that you get with it.

However, if you are on a budget, we would recommend a desktop in a heart beat, why? because in order to maximize performance/dollar value, desktops are the way to go.

The hardware found in laptops is weaker as compared to that found in a desktop given the same price category. Since laptops have a small chassis and need to manage their heat, the components found inside are low powered ones.

You can see here that the desktop version is much more powerful. Not only does it have a higher clock speed but also a higher number of Core count.

So, if you want to maximize the performance, go for a desktop.

Does a Graphics Card Matter for Photo Editing?

This is another very commonly asked question.

The simple answer is that YES, a graphics card does matter. However, the utilization of a GPU differs from software to software.

Adobe Photoshop has been increasingly updating the software to make use of GPU over time. Certain effects in Photoshop particularly use the GPU power.

In fact Adobe says that there are certain features that cannot work without a GPU. This include features like 3D, Oil paint, perspective warp, bird eye view etc.

Hence, there is absolutely no doubt that GPU does have its function for photo editing.

However, it is NOT an absolute necessity as there are only a handful of effect that make use of the GPU acceleration.

What Kind of Hardware to Look For?

Let us review what are the most important components for photo editing.

A good processor is BY FAR the most important consideration when getting a computer for photo editing.

In fact, you should maximize your budget in getting the best possible CPU. You should particularly pay attention to the single core performance of the CPU. Try to get the one with the highest single Core clock speed.

As far as the cores are concerned, their usage depends on the software. While software like the Adobe Photoshop does make use of multiple cores, it benefits more from a high performance single core.

Plus, there is a limit to how many cores a photo editing software can use and most of the time you wouldn’t see much of a difference from processors with extreme number of cores.

We already talked about GPU earlier. In short, you can certainly see some benefit from the GPU particularly for features that make use of GPU acceleration.

However, in most of the cases, the integrated GPU proves to be more than enough and there is hardly any difference between a mid range or a high end dedicated GPU in terms of performance for photo editing software.

A good GPU comes in handy when you are working on very large files across multiple monitors.

Most of the professionals would recommend that you go for at least 16 GB of RAM. The higher the amount of RAM, the larger the file size you can comfortably work on.

However, if you are on a budget, then even an 8 GB of DDR 4 RAM should suffice.

Professionals almost always vouch for the SSD. These are great for improving the overall performance of your system and they are recommended for keeping your active projects.

However, since SSDs are expensive, a normal HDD makes more sense if you have a huge amount of work to store. HDDs are inexpensive and great for archiving.

We recommend a combination of both.

The point to note here is that you need to maximize your budget for a good CPU. This is particularly the case if you are very tight on budget.

A good CPU has a tremendous relationship on the overall performance of the photo editing software.