For people who rely on doing their work on computers, especially web designers, architects, graphics designers etc, the presence of just one monitor can prove to be a hindrance.

Therefore, for a large majority of people, dual monitors are a need. In order to achieve this, it is imperative to have one of the best graphics cards for dual monitors.

The motherboard, often times, only has one video port. This is the standard and usual provision which enables the user to attach and run just one monitor.

This is enough for most people. However, it someone wants to up the ante and decide to run TWO monitors instead of one, they will need to buy a graphics card so that they can achieve this.

In some cases, the motherboard does not even have the one port. Hence, in both of these cases, the need for a suitable graphics card arises.

List of Best Graphics Cards for Dual Monitors in 2021

This card by MSI is a decent option for people looking for one of the best graphics card for dual monitors at a budget. It is quite an affordable card that makes it great for people with a low budget. It has two video ports.

One of them is an HDMI port while the other is a DVI-D port. With just two ports and an ultra affordable price tag, this card is great for simple and straightforward use.

The MSI NVIDIA GeForce GT 710 is great for students and individuals who have a limited budget. Keeping in view its price, the option of dual monitors is quite decent and depending on the work, this card can be more than enough.

This card utilizes an x16 slot and its maximum power requirement falls at 19 watts, making it a decent choice.

This is another good graphics card for dual monitors. This card is an affordable choice for beginners and entry level users. The ASUS GT 710 only takes up a single PCIE slot unlike the MSI GT 710 which takes up a full x16 slot.

The ASUS GT 710 has 4 HDMI slots which is a great feature for an entry level graphics card. For people looking to create a dual monitor setup, this card is good way to get started.

To give you a good idea about the performance of this card, a comparison between the ASUS GT 710 and GT 620 was done.

The ASUS NVIDIA GeForce GT 710 comes with four HDMI Slots. Compared to the one released by MSI, this is a huge plus. Utilizing this feature, users can connect up to four different monitors, let alone just two.

Furthermore, this shows us the capability and the power of the card itself. Giving the option of four slots shows that this is not just some ordinary card. However, it is categorized as a entry level GPU and thus, is good for low to moderate level work.

If you have a limited PCIe slots and you want to utilize the x1 slot readily available, then this is best graphics card for dual monitors.

For those looking for a bit of performance the ZOTAC GeForce GT 730 is not a bad choice. It features three different video ports so that you can connect up to three different monitors.

With an affordable price tag, it is also good for people with a limited budget or users who are looking for a light yet moderately capable graphics card.

Comparing it to the MSI NVIDIA GeForce GT 710 will yield the efficiency of this card well. Granted there is a price difference but it this comparison may serve to show us the upgrade the ZOTAC GT 730 gives us in that price jump.

With the option of connecting up to three different displays, the ZOTAC GT 730 is a great option for designers and CAD users. The video ports include a DVI-D port, an HDMI port and a VGA port.

If you want to operate some important software that require CPU acceleration at a budget, then this is the best graphics card for dual monitors.

The Gigabyte GeForce GTX 1050-Ti is the first graphics card for dual monitors on this list that goes in the slightly upper price range than most.

It is good for users who have a moderate need and can run advanced 3D CAD software like Revit in a medium capacity. This makes it a good card for architects and CAD users who want to work with more than one monitor.

This card is based on the GeForce GTX 1050-Ti. A comparison between this card and the GeForce GT 710 will be done in order to accentuate some aspects and to show that in just a difference of approximately $100 in their price, the performance of the GTX 1050 Ti is vastly better than the GT 710.

All in all, the comparison yielded the fact that although the price difference is not that much (when looking at it from a graphics card point of view), but the performance is vastly different.

If you are looking for a fairly capable card at a reasonable price tag, then we recommend this as the best graphics card for dual monitors.

The PNY Quadro P620 is based on the Nvidia Quadro P620. In order to highlight the performance and the overall standing of this card, a comparison between it and the Quadro P2200 will be done.

The P2200 is far better than the P620 but the latter comes with a price tag of only $219.99, which is miniscule compared to workstation-grade card standards.

The PNY Quadro P620 comes with 2GB GDDR5 memory. According to a benchmark comparison done by Technical.city, the overall benchmark performance of the P2200 was 148.5% better than that of the P620.

The PNY Quadro P620 comes with four ‘Mini-Display Port 1.4’. These four slots can be utilized by users to create an easy experience and to get their work done quickly and more efficiently.

If you are looking for a low level workstation option, then this is the best graphics card for dual monitors.

Guide to Choosing the Right Graphics Card for Dual Monitors 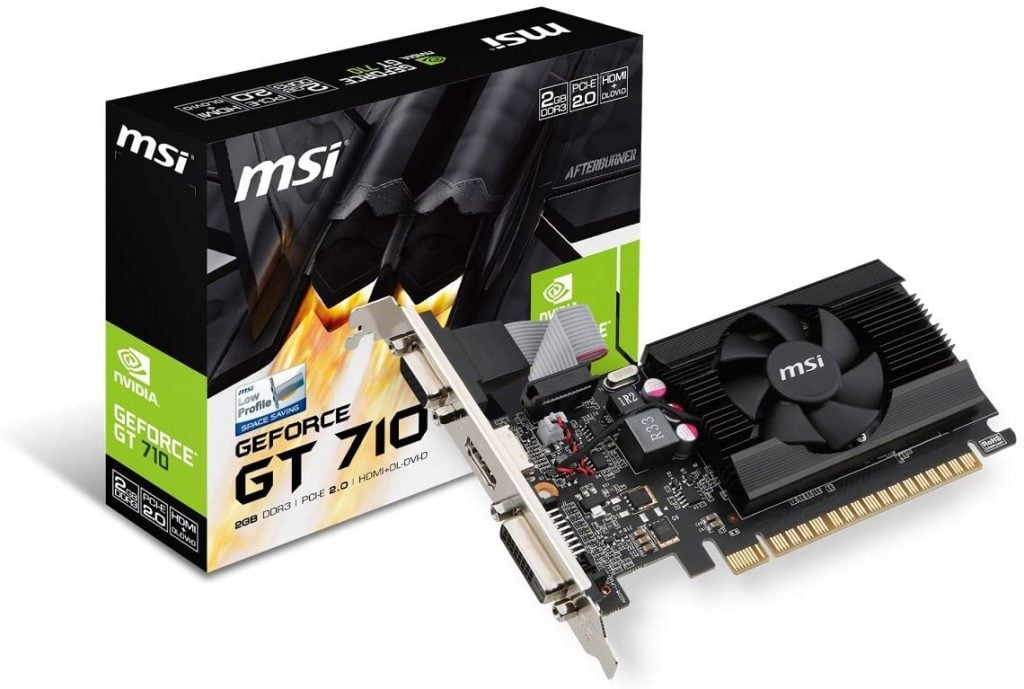 Do all motherboards have video ports?

Motherboards generally do come with video ports. However, there are cases where even the motherboard does not have a port.

In these cases, it is necessary to buy a dedicated GPU card with a video slot. And if you are looking to attach multiple monitors, then you need to buy a GPU with multiple ports.

Dedicated graphics card refer to the cards that are separately sold. They can be defined better in contrast to integrated GPUs which come with the system itself. The iGPUs are very limited in their performance and capability.

What are some types of video ports?

There are different sort of video ports you can get. Some of them vary with each other on the basis of their displaying quality and capability.

They include HDMI, VGA, DVI-D, Display Port, and Thunderbolt 3. The latter two are not that common.

The ones that are commonly found and used are HDMI, VGA and Display Port. To understand the difference between these video ports, you can compare HDMI with VGA.

VGA is significantly older than HDMI and thus, its quality is quite diminished in comparison to HDMI. HDMI is much newer and it provides superior performance and options to users.

Furthermore, the port themselves are quite different from each other. VGA cables have a wider and bigger end while HDMI ports are sleeker and slimmer.

HDMI displays superiority due to the fact that it supports video as well as audio. This option is not available in the other options.

Not as a rule. Sporting two video ports does not require the card to be extraordinary in terms of performance and power. Thus, you don’t necessarily have to spend a lot of dough on these sorts of graphics cards.

While you could invest a substantial amount in your graphics card keeping in view your other responsibilities and tasks, you don’t have to worry about the card being too expensive just due to the fact that it has two video ports.

This is a good thing as buyers for these sorts of cards can include students and sole users who have a limited budget. Due to the price being reasonable, the concept of dual monitors is not some castle in the sky.

Is it possible to attach one monitor to the motherboard and the other to the discrete GPU’s video port?

Yes, it is. But once again, this can only be done if the Motherboard’s BIOS supports the feature of multiple displays simultaneously.

However, it should be kept in mind that if you choose to keep the integrated GPU as the main display adapter, you may have some unsatisfactory display results.

And even if your motherboard does not have this feature, you could simply buy a discrete GPU with more than one video port and not bother troubling yourself with this at all.

Furthermore, the dedicated GPU is much more suited to this task than the integrated one. And if you do choose to use one video port on the GPU and the motherboard, then you may face to do some fiddling with the BIOS settings.

Will the performance on the system be affected if more than one monitor is attached?

Yes, definitely. When you are connecting more than one monitor, you are putting a strain on your computer system. Let’s say you want to do some heavy 3D CAD work. I

f you are working on just the one screen and you are drawing and simulating 3D designs and models, your card will co-operate just fine (provided you have an adequate card).

But if you decide to connect another monitor and render additional graphics on top of your already hefty work, then there will be definitely a negative effect on your performance.

But if your card is strong enough, then you might not detect a difference in the performance.

Who should invest in graphics card for dual monitors?

There are various sorts of tasks and different sorts of work that can require dual monitors. Dual monitors can provide the user with ease in navigation, more coverage and lesser multi-tasking hassle.

For example, a web developer can open his code on one monitor while setting up a tutorial or any similar software on the other monitor. This can save the hassle of constantly changing tabs and windows within one screen.

So, who should invest in graphics card for dual monitors? This can include architects, web developers, CAD users and individuals who have to deal with similar software and tasks on a regular basis.

In this guide, some basic concepts were covered in order to help buyers to purchase the best graphics cards for dual monitors.

Dual monitors can be vastly helpful for a variety of different tasks. Designers, CAD users and web developers can make their work much less cluttered by using two different monitors. Above a list of some decent graphics cards is given.

After understanding your need and the scope of your work, you can make a purchase accordingly.