If you want to build an Intel gaming setup with the 8th or the 9th gen processors, then you need a motherboard that has the LGA 1151 socket support.

Fortunately, as is the case with all sockets, there are plenty of motherboards from all the Intel Chipset series as well as from various form factors that you can find for Intel processors.

In this article we will have a look at some of the best LGA 1151 motherboards for gaming that you can find for gaming.

Whether you are looking for a budget H series or the premium Z series boards, Intel LGA 1151 socket can be found on all. However, for gaming setup, we highly recommend going for a Z series motherboard if you are an enthusiast or B series if you are on a budget.

The following motherboards for the LGA 1151 standout in terms of value and popularity.

First up we have one of the most recommended motherboard for gaming which also happens to be quite affordable.

If you are planning on building an economical setup but you do not have any ambitions for overclocking, then this is the best LGA 1151 motherboard for gaming in our opinion.

It follows the ATX form factor and aesthetically speaking, it cater to gamers completely with its beautiful heat sinks and RGB lights.

It features the B365 chipset which is excellent for budget gaming builds. While it is not as robust as the Z series chipset, if you are not planning on getting an “unlocked” processor or a processor built for overclocking, then this is more than enough.

The motherboard features 2 x PCIe X16 slots one of which operates at full X16 bandwidth while the other operates at X4 bandwidth.

Hence it is excellent for a single graphics card setup, but if you wish to have multiple-GPU, you can do so with an AMD crossfire setup not with two NVIDIA GPUs though. NVIDIA GPUs require at least an X8 slot.

Other than that, it offers an ample 3 x PCIe X1 slot for smaller expansion cards, 2 x M.2 slots both of which can support PCIe NVME SSDs and a good 6 x SATA 3 ports.

Another point to note is that it offers extensive connectivity. It features 3 x Video ports including DVI-D, HDMI and the much coveted Display Port and also has 5 x Audio ports for 5.1 surround sound system.

Many motherboard of this price range usually ditch the DisplayPort and have 3 x Audio ports.

Next up we have a micro ATX motherboard for gaming. This is usually preferred by those who are planning on building a compact system.

The first thing you will realize here is that despite being a motherboard featuring the premium Z390 chispet, it is rather inexpensive. Well that is usually one of the reasons why many choose to go for Micro ATX boards.

The hallmark feature of the Z390 chipset is that it allows for overclocking. Hence if you are an enthusiast seeking to boost the performance, this motherboard is purpose built for that.

Like the previous motherboard, this too features 2 x PCIe X16 slots one of which operates at X16 and the other at X4 bandwidth. Therefore, for single graphics or dual AMD graphics card, this should suffice.

Furthermore, this too features 2 x M.2 slots. But unfortunately it offers fewer PCIe X1 slots and SATA 3 slots compared to the previous motherboard. This is due to the smaller form factor.

One issue here, as with many mATX boards, is that the PCIe X1 slots are sandwiched too close to the X16 slots. Therefore, when you occupy the X16 slots with large graphics card, they may overlap the small PCIe X1 slots rendering them useless.

All in all if you are looking for an mATX option or the premium Z390 chipset for cheap, then this is the best LGA 1151 motherboard for gaming in our opinion.

GIGABYTE B365M DS3H is for those seeking to keep their expenses on their motherboard at the minimum.

If you are highly restricted on your budget and want to maximize your budget for the rest of the components like a good graphics card then you can look into this.

While there are cheaper motherboards out there from the ‘H’ series chipset, we do not recommend you go that route since they do not have even have the max PCIe Lane to support a full X16 graphics card.

Hence, a B360 or a B365 chipset is the minimum we recommend for a gaming setup.

This is micro ATX board with a single PCIe X16 slot for supporting a single graphics card.

It has other expansion slots including a PCIe X1 and a PCIe X4 slot for smaller cards.

It can support a maximum of 64 GB but there are high chances you will not be utilizing all of those anytime soon particularly if you are building a budget gaming rig. Only upto 2666 Hz DDR4 RAM can be supported.

Surprisingly, despite being an affordable mATX board, it offers a good 6 x SATA 3 ports. As such, you can add plenty of drives to it in case if you are planning on a building a part time home NAS.

In short, if you want to save up on cost, then this is the best LGA 1151 motherboard for gaming.

With this motherboard we enter the realm of premium models. These are expensive, but if you are an enthusiast with a fair budget, then we cannot recommend these enough.

This motherboard, for instance, is particularly designed for high performance processors such as the 9th and 8th gen Core i9 and Core i7 processors from “unlocked/K” version i.e the i9-9900K, i7-9700K etc.

It has the VRM capacity, the heat sink design, and the software to support high powered components and also support them when overclocked.

Other than that, there two important points to note here. The first is that this motherboard comes with a built-in WiFi.

The second is that it offers 3 x PCIe X16 slots. These PCIe slots work in the following configuration: 16x/0x/4x or 8x/8x/4x

What this means is that when you have a single graphics card only, use the first PCIe slot as it would deliver the full X16 bandwidth.

If you have two NVIDIA or AMD graphics card, use the first two. However, in doing so, the bandwidth between the first and the second slot will be distributed equally.

The last slot is reserved for a 3 way AMD crossfire since AMD GPUs only require an X4 slot to operate.

If you are looking for a performance grade option particularly for an SLI setup, then this is the best LGA 1151 motherboard for gaming.

This motherboard is in the same class as the previous motherboard mentioned above . However, it differs in two important regards.

First and foremost, it has a better phase power design of 12+1. Hence it has a whopping 12 VRMs for the CPU. The previous motherboard only had 10 VRM for the CPU.

Secondly, it features a built in sound card worthy of being used for audio production. The rear audio ports have an SNR of 114 DB with very high quality capacitors.

Other than that, the PCIe X16 configuration, M.2 slots and SATA ports are more or less the same here as with the previous motherboard.

This motherboard too features a built in WiFi and has dedicated software for overclocking.

All in all, if you came here looking for an option with a high VRM count for high stability during overclocking, then this is the best LGA 1151 motherboard for gaming.

Which Processors is Compatible with LGA 1151 Socket?

Basically, the LGA 1151 socket supports Intel 8th and 9th Gen processors. This includes all the processors from Celeron to Core i9.

No, unfortunately you cannot install the latest 10th Gen Intel processors on the LGA 1151 socket.

The LGA 1200 motherboards with their latest chipsets are more expensive than their older LGA 1151 counterparts.

There are many factors that go in to play in determining the price of the motherboard.

This, to most extent, is determined by the chipset the motherboard harbors. Here are some of the major determinants of the price.

We will discuss the three popular chipsets for Intel motherboards below, but the type of chipset the motherboad has matters a lot.

A chipset determines the amount of PCIe Lanes it has, whether it can support overclocking or not, how many USB ports it can offer, the version of the USB, SATA and PCIe protocol, RAID support etc.

There are three major chipset series for Intel processors i.e Z, H and B.

The amount of PCIe lanes a motherboard can support is directly linked to the price.

There are three major sub components to this

Also Read: How Many PCIe Lanes do I Have?

The size of the motherboard also factors into the price tag.

They have the following dimensions

ATX motherboards are the largest and they usually have the highest amount of expansion slots.

They are generally expensive both in the budget and in the premium range.

Micro ATX motherboards are cheaper and great for budget builds.

Mini ITX motherboards offer the least expandability with their single PCIe X16 slot and are preferred by those who want a mini gaming setup.

These are generally expensive if you compare the similar specs with mATX or ATX motherboard mostly due to their small form factor.

For a decent gaming setup, we recommend you stick with either micro ATX or ATX. That way, you will have room to expand in the future. 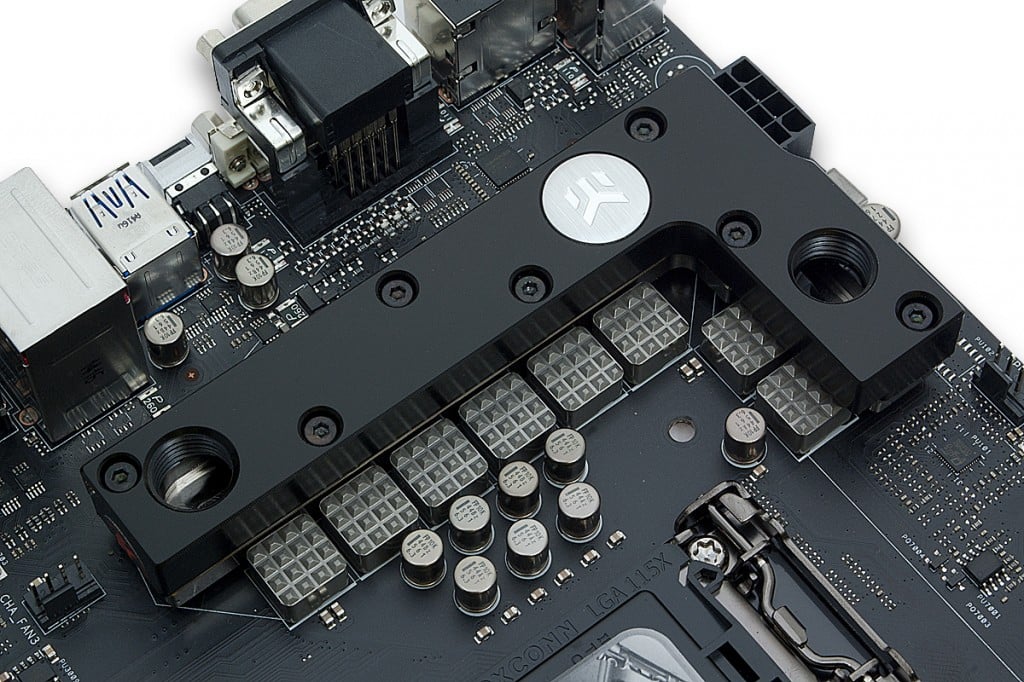 One of the biggest factors that differentiates a cheaper motherboard from the more expensive once is the type of Voltage Regulator Module it uses and the Phase Power Design it has.

The higher the number of VRMs and the better their quality, the more expensive a motherboard is. A higher number and a better VRM allows for great voltage regulation. This in turn allows your motherboard to perform well in overclocked situation and also allows it to run cool despite having high powered components installed.

Difference Between Intel Z, H and B Chipsets

This chart should give you an idea about how the chipset differ and what they pertain to.

It misses out on some of the latest chipsets like the Z390, B460, Z490 etc but should give you an idea about what the different series mean.

Here is a brief summary:

In this article we looked at some of the best LGA 1151 motherboards for gaming from different price ranges and also talked about the different chipsets and sockets.

LGA 1151 is basically the socket used by the 8th and 9th gen Intel Processors. While the newer LGA 1200 socket supporting the latest 10th Gen Intel processors exists, many will find going for the 9th Gen route much more economical.

Plus, there isn’t a huge performance difference between many 9th and 10th gen Intel processors anyways.