VR is one of the greatest display technology revolution that has happened since the advent of screens. It has opened up new horizons in how we experience gaming.

If you want to experience first hand the joy of a VR gameplay then you need a PC that is suitable enough to handle demands of gaming in a VR headset.

When it comes best motherboards for VR, any standard gaming motherboard would do just fine. You have heard the term “VR Ready” motherboards. That actually holds no meaning as it only is a buzz term.

In this article we will review some of the latest high quality motherboards that are highly suitable for VR gameplay.

Comparison of Top Motherboards for VR

First up we have a rather affordable motherboard that you can use for an excellent casual gaming rig for and AMD based system.

This is an upgrade over the previous B450 Chipset. The hallmarks of this chipset is that it does not require a BIOS update in order to use the latest Ryzen processors.

On top of that, this chipset introduces the PCIe V4.0 protocol making it highly future proof. On to top that all, it also support the WiFi 6 protocol with the built in WiFi.

While there most certainly are cheaper motherboards with an AM4 socket with the older B450 chipset. they lack the newer protocol and also lack a built in WiFi 6.

As far as VR support goes, this motherboard features a single PCIe X16 slot which can be used for installing a graphics card. Along with that it offers not just USB 3.0 ports, as are required by many VR headsets, it sports 4 x USB 3.2 ports which have a much higher transfer speeds.

Moreover, it also comes built in with an HDMI 2.1 port. This is, again, the latest protocol that can display 8K resolution at 60 FPS or 4K resolution at 120 Hz making this motherboard an excellent option not just for the current gen of VR headsets but also for the future high res models.

All in all, if you are looking to save up on cost on your AMD system, then this is the best motherboard for VR in our opinion.

Next up we have another motherboard for an AM4 AMD build with the B550 chipset. However, this is slightly larger with an ATX form factor.

This gives it the obvious benefit of having more expansion slots. As such, unlike the previous motherboard, this motherboard features 2 x PCIe X16 slots.

One of the PCIEe slot operates at X16 bandwidth while the other operate at X4 bandwidth. While NVIDIA SLI would not be possible here, if you plan to do an AMD Crossfire setup with two AMD graphics card, you would be able to do so here.

The fact that this motherboard also supports the PCIe V4.0 protocol for CPU PCIe lanes giving you twice the lane speed as compared to the previous PCIe V3.0 protocol means that the graphics card installed in the PCIe X4 slotwould also perform optimally.

Other than that, this motherboard features a much better phase power design, better heatsinks and overall better build quality which makes it more expensive than the ASUS motherboard listed above.

Unfortunately, this motherboard does not feature a built-in WiFi. But to cover up for that, it has plethora of smaller PCIe expansion slots that you can choose to populate with a wireless card.

All in all, if you came here looking for a gaming model for AMD then this is the best motherboard for VR.

ASUS TUF Gaming is ye another AM4 gaming motherboard for an AMD system. Like the previous motherboard, this is also based around the B550 chipset.

We explained the benefits of the B550 chipset which essentially makes the motherboard compatible with the latest Ryzen gen processors without making a BIOS update. It also gives it the PCIe V4.0 protocol, HDMI 2.1 and WIFI 6.

We have chosen this motherboard because of its micro ATX form factor. While this may not have as many smaller PCIe expansion slots as compared to the motherboard above, it does offer 2 x PCIE X16 slots.

Again, one of the PCIe X16 slot here operates at full X16 bandwidth while the other operates at X4 bandwidth making it compatible with an AMD crossfire setup.

Unlike the ASUS Prime B550M-A above, this is slightly more expensive despite having the same form factor and both featuring built in WiFi 6.

That is primarily due to the fact that this motherboard utilizes better components and heat sinks for regulating temperature and also has a better sound card with 5 x Audio ports and a digital out.

As such, if you want to build a compact high performance PC with a micro ATX form factor, then we recommend this as the best motherboard for VR.

It has all the required ports from the get go for most VR headsets. For ease of use, it even has a BIOS flashback button on the back panel for easily upgrading it with a USB port alongside.

This would come in handy if and when you need to flash the BIOS for the newer Gen 4 Ryzen processors. 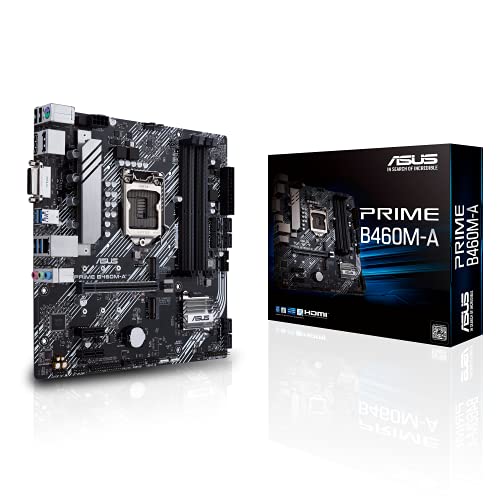 Next up we have the most affordable motherboard in this list for your VR headset designed for the latest 10th and 11th gen Intel Processors.

Hence, if you want to build an Intel based PC at an affordable price tag, then this could be the best motherboard for VR in our opinion.

It is essentially a bear minimum motherboard, while it does feature the mid range B series chipset, do not expect this motherboard to offer premium features such as overclocking, powerful heatsinks and VRMs or a plethora of PCIe expansion.

It does have the required USB 3.2 ports as well as the HDMI port to handle most of the current gen VR headsets.

Unfortunately, unlike the AMD B550 motherboards mentioned above, this does not support the newer PCIe V4.0, WiFi 6 and only features the HDMI 1.4 instead of the HDMI 2.1 found in the aforementioned motherboards.

Other than that, this is a fairly basic motherboard as can be deduced from the low price tag. It has a single PCIe X16 slot and a few smaller PCIe slots.

It does offer a single M.2 slot for SSD storage and 4 x SATA 3 ports making it great for creating a home server should you wish to.

But for a pure VR gaming experience on a budget Intel setup with the latest gen Intel processors, we recommend this motherboard. 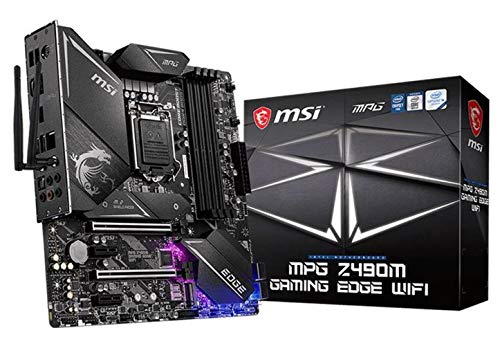 Finally here have an enthusiast grade motherboard for an Intel based gaming PC. This is more than just capable of supporting VR experience.

For starters, it has micro ATX form factor. We personally like this form factor because it is compact, great for cable management and also less costly.

Furthermore, this motherboard comes with a built in WiFi with the latest WiFi 6 protocol.

But the crown jewel of this motherboard is the Z490 chipset. The Z series chipset for Intel motherboards are considered the cream. They have a higher PCIe LAN count, and an excellent phase power design making them highly suitable for overclocking and have NVIDIA SLI support.

SLI requires at least X8 bandwidth, whereas crossfire can operate at X4 bandwidth. Hence, if you plan to have a dual NVIDIA card setup for ultimate VR gaming experience on an Intel built then this is one best motherboards for VR in our opinion.

Unfortunately though, the onboard video out put on this motherboard only has an HDMI 1.4 and hence would not support higher resolution than 4k @ 30 FPS. However, this should not be an issue since the graphics card that you install would have the latest output ports anyways.

What is a VR Ready Motherboard?

The term “VR Ready” was used a few years back as a buzz and a marketing term for highlighting the fact that the motherboard has enough USB ports and the HDMI ports to support VR headsets.

VR headsets, from brands like Oculus, have a number of USB ports that they require to operate. An Oculus Rift, for example, requires 3 x USB 3.0 ports, or better, for its three sensors and one USB 2.0 ports for the headset itself.

While the sensors can be connected to USB 2.0 ports, they would not work optimally as the USB 2.0 has a slower transfer speed as compared to a USB 3.0.

The sensors basically are the critical components that track your movement and adjust the displayed screen. Failing to provide enough transfer speed to these sensors can result in a less satisfying experience.

Hence, the motherboards that previously listed themselves as “VR” ready basically addressed the fact they have enough USB ports as well as a single HDMI port in order to operate the Virtual Reality headsets.

Is Motherboard a Critical Component for VR?

While not directly, since any motherboard so long as it has the aforementioned ports would be able to support most VR headsets, it is the overall system that you want to build that makes a motherboard highly relevant.

Playing games on a Virtual Reality headset requires that your GPU support very high resolution. Take Oculus Rift as an example. It has a resolution of 1280 x 1440 per eye totaling 2560×1440 on both.

As such, in order to game on this large display while maintaining a very high frame rate, you would require a fairly power gaming PC.

Now in order to do so, you would need a PC that has support for the required CPU socket as well as runs cool even during heavy load thanks to better quality VRMs.

In that sense, a good motherboard becomes highly relevant.

What is the Most Important Component for a Good Virtual Reality Experience?

That depends upon what you want to achieve from the VR headset. If you simply want to watch movies, then even a PC with an integrated graphics card would work.

However, that is obviously not the reason why most would choose to go for a VR headset. The primary audience of a VR headset are gamers.

Hence, the most critical component here is naturally the graphics card. The recommended graphics card for a VR headset like OCULUS Rift is an NVIDIA GTX 1060. However, note that this recommendation is based on the fact that the Oculus rift has the resolution of 2560×1440 in total or 1280×1440 per eye.

Newer headsets like HP Reverb G2 and Pimax 8k have a resolution of 4k and whopping 8k respectively. This is multiple folds higher than the resolution on an Oculus Rift.

Now to support this resolution while maintaining a high frame an NVIDIA 1060 would definitely not be enough.

You would have to invest in a much more powerful graphics card and may even need better ports like USB 3.2, HDMI 2.0. You may even be tempted to build a dual graphics card rig in order to maintain the frame rates at ultra high resolution and ultra high graphics.

In short, a good motherboard is the building block of a good gaming PC. If you want to build an ultimate gaming PC to support the high end and high res VR headsets, it is recommended that you invest in a good quality motherboard for VR as well.

Along with that we talked extensively about what it means to be a good motherboard for VR, the requirements for a typical VR headset as well as how to make sure that your system stays future proof with latest high res VR headsets out there.