5 Best Motherboards with Thunderbolt 3 in 2020

Thunderbolt 3 were originally conceived for compact machines like laptops for easy connectivity. However, their stupendously fast transfer rate has made them quite famous among desktop users as well.

The best part about Thunderbolt 3 is that it shares the same form factor as a USB 3.1 Type C therefore, this makes them compatible with almost all of the latest devices that use this port form factor. At the same time, it provides so much more than a mere USB 3.1 Type C port.

For those of you who value the Thunderbolt 3 port, you will be delighted by our selection of the best motherboards with Thunderbolt 3.

What to Expect Here

The first thing you will notice is that motherboards with Thunderbolt 3 ports are rather rare at the moment. While we can be certain that more and more motherboards will be made available in the future, currently, this is quite a niche spec to find on MOBOs.

Why is that so? Well that has mostly to do with the fact that Thunderbolt 3 expansion slots are readily available and most users generally do not seek to have them built in from the get go.

Secondly, the best motherboards with Thunderbolt 3 are slightly more expensive. This is due to two simple reasons. For starters, a Thunderbolt 3 built into the motherboard charges a premium. Besides that, Thunderbolt 3 ports are generally found only on high end MOBOs built for workstations.

As mentioned earlier, there aren’t plenty of MBs with built in Thunderbolt 3 at the moment. The ones available are as follows: 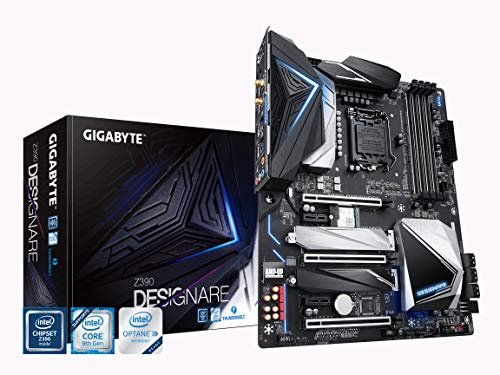 A mid range Intel Based motherboard with Thunderbolt 3.0 port featuring the common LGA1151 socket and Z390 chipset. Great for professional designers and editors.

This is certainly the most famous motherboard with Thunderbolt 3 port out there. If you are building an Intel based system, then there are high chances that this will be your go to choice if you want the Thunderbolt 3.0.

The first thing that many professionals would love is that unlike most of the MOBOs out there, this does not cater specifically to the gamers. In fact, this is specially marketed toward designers, engineers and creators.

Whether you are audio engineer, video maker, 3D designer, city designer this is a motherboard for you. This motherboard actively recommends the use of NVIDIA Quadro graphics card that are the equivalent of the NVIDIA GeForce cards but for engineering use case, floating point operation and plethora of other specialized professional applications.

Besides the Thunderbolt 3.0 port, this offers plenty of sweet features.

For starters, this isn’t really an expensive motherboard. It costs almost the same as any high quality ATX Intel Motherboards. Therefore, for those looking to build a workstation, this is certainly among the best motherboards with Thunderbolt 3.

The motherboard offers a 3 x PCIe 3.0 x 16 slots. However due to the limitations of the supported processors, you can only utilize the first port to its maximum 16x bandwidth. Therefore, if you have a single graphics card to install, use the first port.

You can also do 2 way SLI with NVIDIA Card and 3-way Crossfire with AMD cards. However, note that the bandwidth of the PCIe 3.0 slots changes the more cards you install.

This motherboard is also a heaven for SSDs and for RAID utility. The motherboard is the first in using a technology that directly attaches the Add in Card (AIC) SSDs to the CPU giving unparalleled performance.

A workstation is incomplete without a robust storage configuration, this motherboard will allow you create a safe, fast and redundant storage environment. It also supports 2 x M.2 slot that, along with AIC, can reach speeds of 3551 MB/s.

You must also note that this MOBO features a DP 1.4 IN port. This allows you to connect the internal as well as the external graphics cards to the system. Once connected, you can use the Thunderbolt 3.0 ports with multiple devices.

It is also worth noting that the motherboard features higher than usual Voltagre Regulator Module (VRMs) with a phase power configuration of 12+1. A higher number of VRMs means better control on the voltage being transferred to the motherboard. This in turn promises stability in your overall system.

Read: What is VRM on Motherobard in Detail

All in all, if you are seeking to build a workstation computer for your professional needs that too at a rather reasonable cost, then this is the best motherboard with Thunderbolt 3.

* Note for single graphics card, use the first X16 slot. When you populate the second PCIe slot, the first and the second both operate at X8. 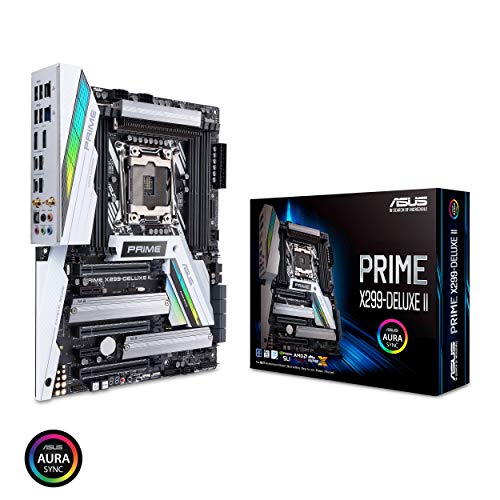 This is a premium motherboard that is stupendously expensive, offers supreme expandability, and is literally built for extreme functionality.

The processor and the motherboard alone would cost you a fortune and therefore, this is beyond the use of mere professional gamers.

This motherboard would be highly relevant for artists, film makers, AI designers and for scientific use. Basically, this motherboard is built for workstation computers.

You must note, however, that the PCIe 3.0 configuration depends upon the PCIe Lanes amount supported by the processor you install. Most of the latest Intel X series processor have at least 44 Lane CPU therefore 3 way SLI would easily be possible.

However, on a lower lane CPU i.e 28 Lane CPU, you would only be able to 2 way SLI but still maintain 3-way Crossfire. AMD crossfire can work on 4x mode while NVIDA SLI requires full 8x.

Besides that, it offers a whopping 3 x M.2 slots of SSDs and 8 SATA slots for connecting other components.

In addition to all that, it offers plenty of premium features like reinforced build with plenty of heatsinks to maintain the temperature of your overall motherboard as well as of your SSDs. It also offers built in AI that can help you overclock your installed processor.

In the end, if you fit into the niche of professional users who want to build a workstation grade computer, then this is the best motherboard with Tunderbolt 3.

*Note for CPUs with lower lanes i.e 28 or 16, the configuration of the PCIe slots changes. Therefore, read the manual.

*Note the configuration also changes depending upon PCIe version of the expansion card. Read the manual. 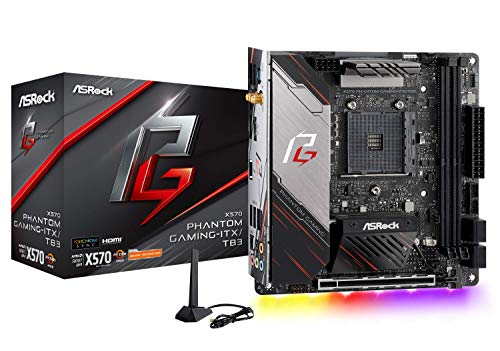 One of the cheapest motherboards featuring a Thunderbolt 3.0 port for AMD AMD4 based systems. Features mini ITX form factor for limited expandability. Suitable for small designing or gaming desktops.

This has, hands down, one of the most phenomenal value in the market and as far as budget is concerned, this is the cheapest motherboard with Thunderbolt 3.0 in the market.

This motherboard is designed for the AMD AM4 socket and it supports all the processors from the AMD Ryzen 2 and Ryzen 3 series. It does not support Ryzen 1

AMD is the pioneer in introducing the PCIe 4. As such, not only is this compatible with the latest Radeon RX 5000 series graphics cards, but it is also future proof and should support future VGA cards requiring higher bandwidths.

Therefore, the benefit of PCIe 4 is obvious. It provides higher bandwidth. It literally doubles the bandwidth from the previous V3.0 PCIe generation.

While even the most powerful of graphics cards does not need faster than 16.0 GB/s of transfer speed, a higher PCIe V4.0 means that your motherboard would be future compatible.

Also, with faster speeds you can save up on the total amount of PCIe lanes available to you. An X8 of PCIe v4.0 would have the same transfer speed as the X16 of V3.0.

While to an average user or gamer this wouldn’t matter much at the moment, but those who connect multiple graphics card and other devices to the PCIe slots would find this much needed.

Besides that, it offers plethora of support for connectivity and expansion including 64 GB of max RAM support, M.2 slot for SSD, WiFi, Bluetooth 5.0 as well as on board VEGA graphics that has the power to run the built in HDMI 2.0 or Display Port 1.4.

In the end, if you are looking for an affordable option, then to us, this is the best motherboard with thunderbolt 3.

What are the Benefits of Thunderbolt 3.0?

Of course, we cannot understate the benefits of a thunderbolt 3 port. There are so many use cases and applications that this can be utilized for.

There are so many different daisy chain configurations that you can create with Thunderbolt 3.0. Simply put, daisy chaining is the process of connecting several computers components together via cables and making them all accessible.

Consider this an all in one port. On top of daisy chaining and being compatible with USB 3.1 Type C devices, this can even transfer videos signals. As such, you can use it to connect to Thunderbolt 3.0 capable monitor.

Since it also carries power, you can even use it recharge your connected devices, including laptops. In other words, if you have a monitor with Thunderbolt 3.0 port, you can connect your laptop to it for sending video signal as well as for charging the laptop in return.

As far as the video signals go, it can carry 2 x 4K signals at 60Hz refresh rate. If you have a single thunderbolt 3 port, you can connect two displays via daisy chaining.

If all of the above wasn’t enough, thunderbolt 3 also supports PCIe Express 3.0 devices such as external graphics cards mounted inside thunderbolt external video card enclosures/docks.

The cherry on cake is that the port also supports 10 Gb Ethernet connection directly between two computers.

Many people often get confused between Thunderbolt 3 and USB 3.1 Type C port.

The issue of confusion mostly stems from the fact they both share the same form factor. However, the difference between the two is huge.

USB 3.1 Type C has a transfer speed of 10 Gbps as supposed to 40 Gbps on Thunderbolt 3. Furthermore, USB 3.1 Type C only supports up to a single 4k resolution monitor not two.

How to Differentiate a Thunderbolt 3 Port from USB 3.1 Type C?

The simplest way is to look at the logo.

The logo for a Thunderbolt 3 has a distinctive lightening icon next to the port, on the cable, or on the device.

There aren’t plenty of motherboards with Thunderbolt 3 out there. Fortunately though, you can find one for all the common processor sockets.

Whether it is LGA 1151 for 9th and 8th gen Intel Core processors, LGA 2066 for Intel Core X series processors, or AM4 for AMD Ryzen 2 and Ryzen 3 processors, you can find one that is suitable for your build.

The best motherboard with Thunderbolt 3 for you at the moment would be quite easy to choose. All you have to do is to decide on the budget or on the processor you want to go for. Then you can choose one of the three motherboards above.

As more motherboards with Thunderbolt 3.0 become available, we will be sure to review them here.