How to Add More SATA Ports to Motherboard? – 3 Methods

A modern motherboard has multiple SATA ports that allow for connecting hard disk drives, solid-state drives and optical drives to a computer. While these ports are sufficient for the needs of most users, what if all the ports become occupied and you can’t connect your extra drives. In that case, you may wonder as to how to add more SATA ports to motherboard?

This is possible and it can be done through a SATA port multiplier card (also known as SATA expansion card). Primarily, it is PCIe based that connects to a PCIe slot on your motherboard and features multiple SATA connectors for connecting your storage devices. There are also M.2 and SATA hub port multiplier cards that plugin into an empty M.2 slot and a free SATA port on your board respectively.

We will explore these SATA port multiplier cards further and talk about their important characteristics.

Below we talk about three simple methods of determining the SATA ports to motherboard.

How to Add More SATA Ports to Motherboard?

It becomes a concern especially if your motherboard has a lesser number of SATA ports or all of them become occupied by your storage devices. In such a situation, you may also like to determine the ways to add extra SATA ports to your motherboard.

This is possible and it’s done through a port multiplier card. These are easily available at a cheap price both online and offline from different manufacturers.

You will find most SATA port multipliers that plugin to the PCIe slot like the X1. Others plugin to an empty M.2 slot on your motherboard. You will also find models that directly plugin into a motherboard’s SATA port to connect multiple SATA drives.

We will cover each of them here to determine the ways to add more SATA ports. 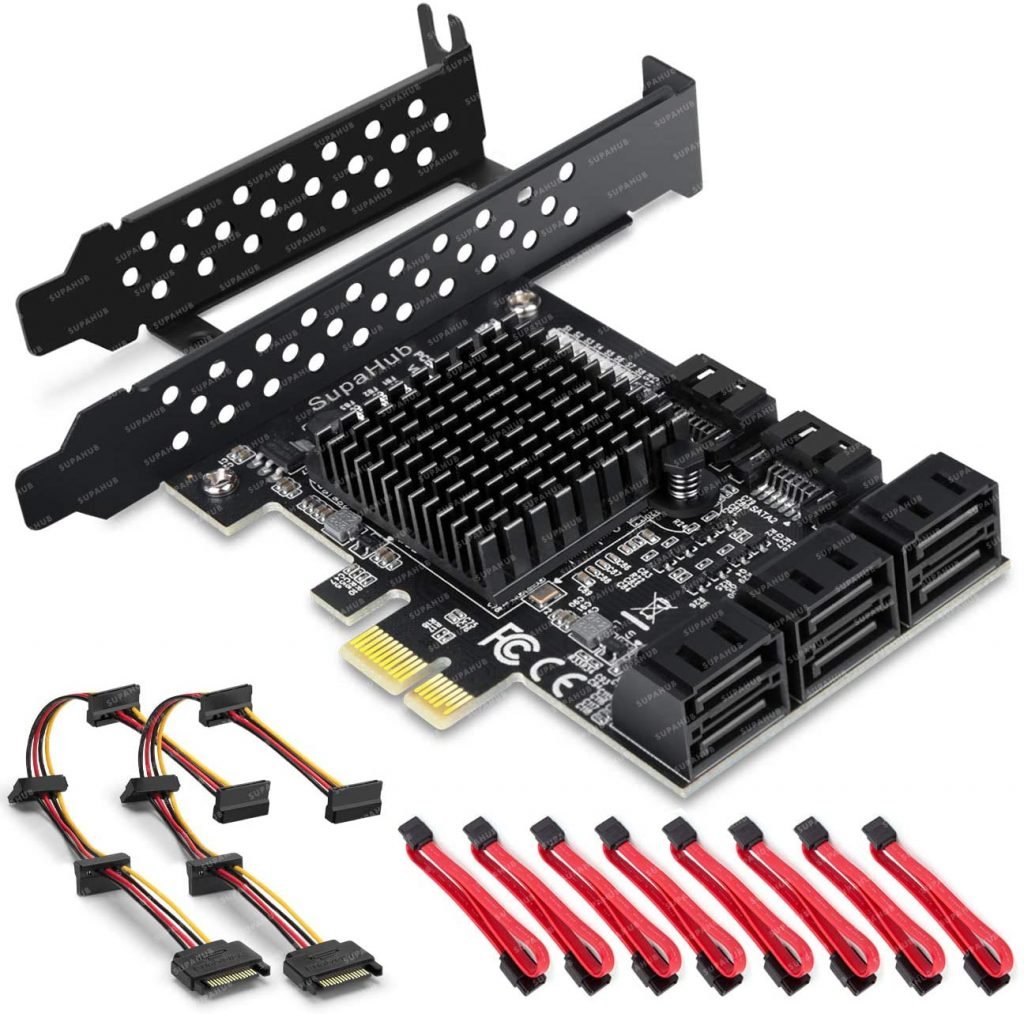 You may already know that PCIe is an interface that connects high-speed components to your computer. Your desktop PC motherboard also comes with some PCIe slots.

You will find multiple SATA data connectors in a PCIe card whose number varies from model to model. Some may have 2 while others may have even 8 SATA data connectors. You can connect multiple drives to them at the same time, and they typically support the maximum data transfer rate of 6Gb/s of SATA version 3.

Keep in mind that apart from connecting your SATA 3 drives to the card, you can also connect your SATA 1 and 2 drives as the SATA ports are backward compatible. They would provide the speed of SATA 1 (1.5 Gb/s) and SATA 2 (3.0 Gb/s) respectively.

Concerning PCIe generation, if you purchase a card with 2.0 generation, it would work if your motherboard supports generation 3.0 being compatible, but you will get PCIe 2.0 performance.

One more thing to note is that some models support RAID, and some do not. However, you can utilize software RAID to improve storage efficiency and performance. These PCIe SATA expansion cards are compatible with different operating systems including Windows and Linux. 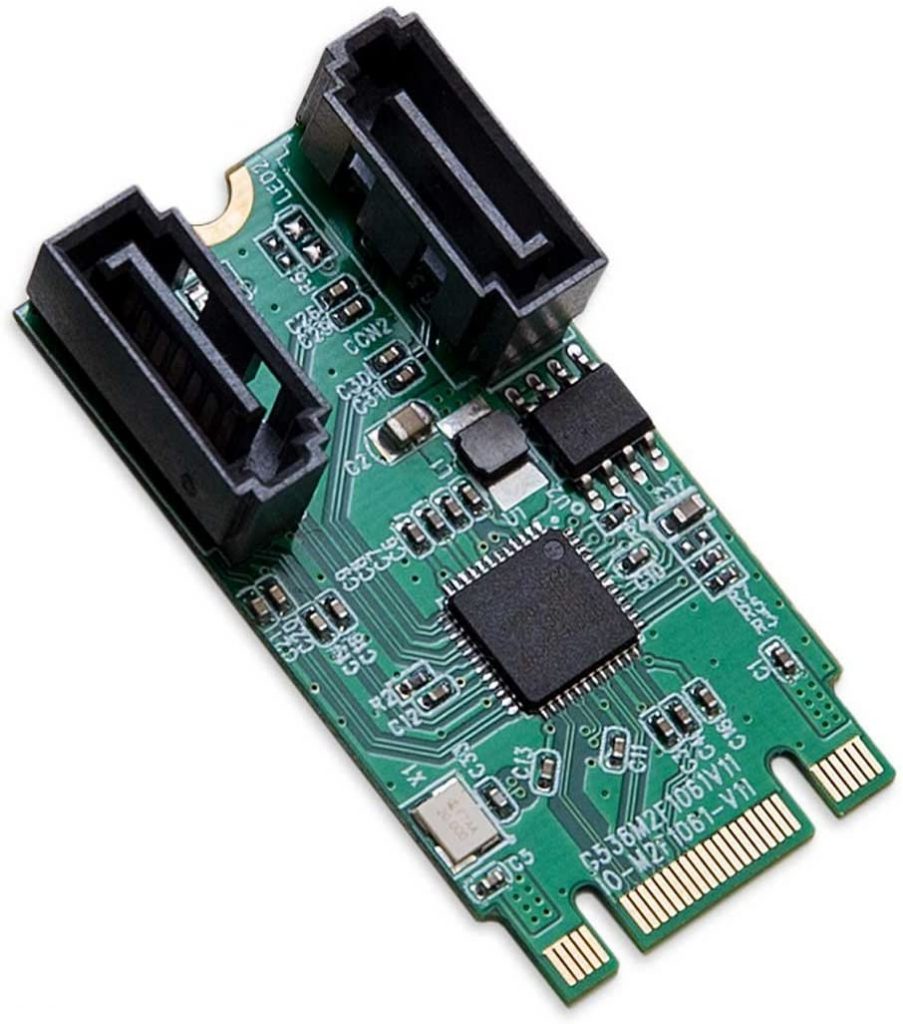 You can add more SATA ports usually through an M.2 B+M key connection if there is an unused M.2 slot on your motherboard. Usually, the card supports connecting multiple drives including SSDs and HDDs through various SATA data connectors it has.

The M.2 based card comes with its chipset and supports plug and play without the need of installing software or changing the settings. The version of SATA it supports is generally 3.

Note that through these cards, the drives can be used for storage purposes only because they don’t show up in BIOS. As a result, you can’t boot from one of these devices that are connected through the card.

These cards are not very expensive and also compatible with multiple operating systems including Windows. 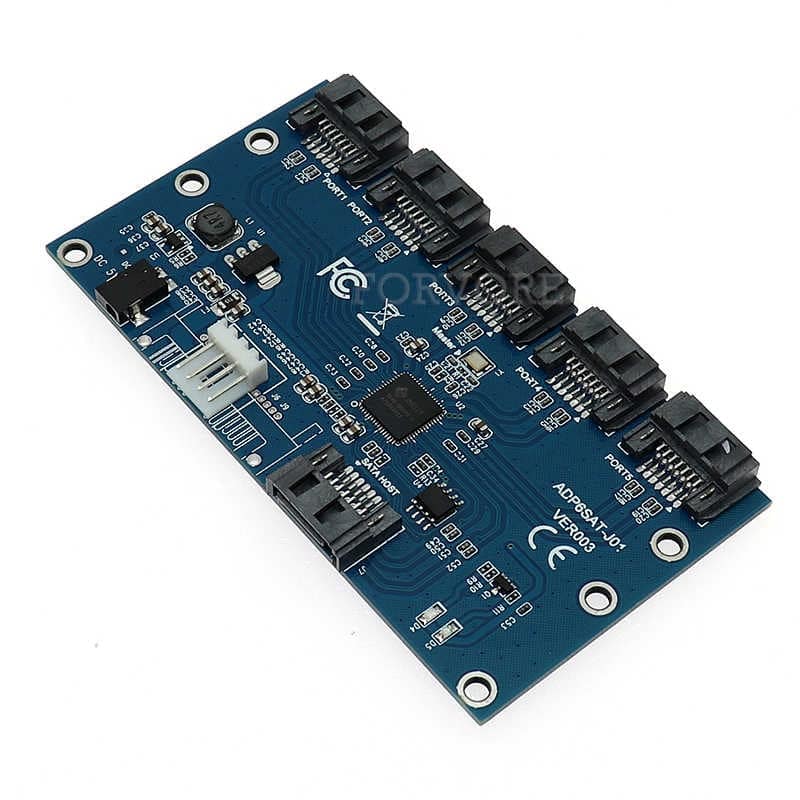 It means you can utilize one free SATA port on your motherboard and connect multiple SATA drives to it. Usually, it features hot-swap and hot-plug features through which you can plug in a drive and remove another without turning off the computer first.

Usually, this multiplier also has a power connector such as a 4-pin connector to supply electricity to the multiplier from the power supply.

You should note that your motherboard should support the port multiplier feature. This is because it’s not a requirement of a SATA controller and some motherboards can only handle a limited amount of drives whether SSD or HDD.

A plethora of SATA port multiplier cards (also known as SATA expansion cards) is available today from different manufacturers. Indeed, they are a convenient way of adding more SATA ports to your motherboard.

The primary reason for using such a card is to add more drives to the system. This lets you increase the storage capacity and backup data that you have in your existing drives.

You can also install another operating system in the drive that’s connected and boot from it in the case of a PCIe based expansion card. Thus, you can have a dual-boot system with two operating systems installed.

Keep in mind that concerning M.2 based and SATA hub port multiplier, it’s not recommended to boot from a drive connected to it as it may not show in BIOS as previously stated.

In this article, we covered different SATA port multiplier cards that are the solution to how to add more SATA ports to motherboard.

In this regard, we recommend that you do your research and buy a reliable card from a trusted brand so that it pays off. It’s also important to consult your motherboard’s manual and specification to make sure your board support’s the card interface.

A safe bet is to install and hook up all the drives to an already installed card before turning the computer on.