Is Mini PCIe The Same as PCIe x1? – Learn Here

There are many slots on a motherboard for different devices and keeping track of all of them can be hard. If you are wondering, is Mini PCIe the same as PCIe X1 then you have come to the right place. Read on to find the answer.

Mini PCIe was an interface standard that relied on the PCIe bus but was used on small devices like laptops for installing expansion cards like storage or network cards. PCIe X1, on the other hand, defines the characteristic of a PCIe slot that’s wired with a single lane on top of the motherboard for additional full sized add-in-card. These two are physically different things but have the same transfer speeds.

Mini PCIe and PCIe X1 look different, hence, they aren’t interchangeable with your devices unless you use an adapter.

In the following text we explore both in detail.

Is Mini PCIe The Same as PCIe X1?

Mini PCIe is a small form factor interface that relies on the PCIe bus. It was built for devices like laptops that have limited space constraints but still high-performance needs.

As such, these slots were initially designed to be used with small form factor expansion cards even on desktop computers.

They were mostly used for storage since they provide a fast link between storage devices and the rest of the computer. Later on, the M.2 slot was developed to take its place. This also used the PCIe bus.

Also Read: How Many PCIe Cables Do I Need?

What is Mini PCIe?

Mini PCIe was also known as mPCIe. As a standard, it allowed the connection of various devices onto a motherboard to provide different services.

This was originally conceived to provide expansion capability in smaller form factor devices like laptops.

It was commonly used on laptops for the network cards that offer both WIFI and Bluetooth capabilities. Due to its small size, it was also used for some embedded systems applications.

Nevertheless, it helps users of small devices expand the capabilities of their computers. This form factor is also similar to mSATA and it’s very easy to get confused between the two. The latter, however, uses the SATA interface.

Again, as far as popularity goes, Mini PCIe is more or less extinct as it was replaced by the M.2 slot.

This is perhaps the characteristic of mini PCIe that makes most people wonder, is mini PCIe the same as PCIe X1.

A mini PCIe slot uses only one lane on a motherboard. This means that data will be transmitted at the bandwidth of the single lane. This is not such a bad thing, however, because a third-generation PCIe lane can transmit data at about 1GB/s.

As far as PCIe X1 slots go, the X1 is the smallest of them all. Electrically, it uses only one data lane that’s made up of a pair of wires for sending and receiving data.

This slot is used for various full-sized PCIe devices that are attached to the board – some of which include high-speed networking or USB expansion cards.

The X1 slot can even take larger cards if it’s open-ended but at the cost of the larger card’s performance as the link will operate at X1 speeds either way.

The performance of a PCIe X1 slot depends a lot on the PCIe generation in use. With the fourth generation, the X1 with one lane can transmit data at 2GdB/s while the older generations have less bandwidth.

The main similarity between a mini PCIe and a PCIe x1 is that they both used a single PCIe lane and hence had the same transfer speed, if taken from the same PCIe version.

Differences Between the Slots

To answer the question is mini PCIe the same as PCIe X1, a look at some of the differences between these two standards and their associated slots will come in handy.

They vary in appearance, pin count, and even use cases. 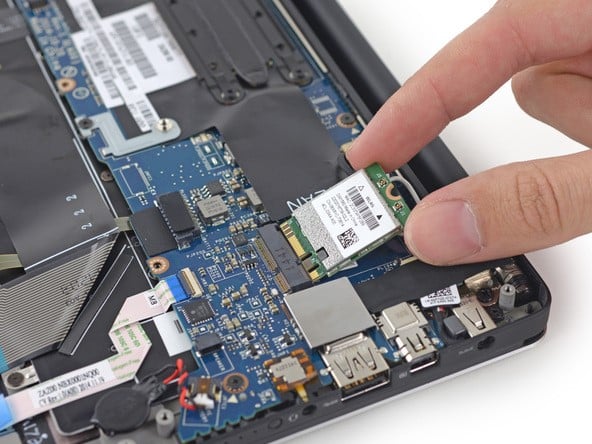 These are interchangeable though since they fit in the same slot. You will, however, need to get the correct one, to avoid getting the longer one which may not fit in your case.

Mini PCIe has a connector with 52 pins along with a mechanical cutout that prevents you from installing it in the wrong slot.

The PCIe X1 slot is a lot larger than the mini PCIe slot. It also has a sturdier construction which may be attributed to the fact that it’s built for much larger devices.

You can find it on most desktop motherboards and it’s used for high-speed devices that don’t have a very high demand for bandwidth.

The slot measures 25mm in length and its total height from its mount on the board is about 11.25mm.

You also get 18 pins which include the transmitter and receiver pair connections that make up a lane.

A similarity with the mini PCIe is the presence of a notch that prevents accidental installations in the wrong slots.

You cannot install a mini PCIe device on a PCIe X1 slot and vice versa due to the stack differences in the two device’s physical profiles.

Also Read: Best AM4 Motherboards Under $100 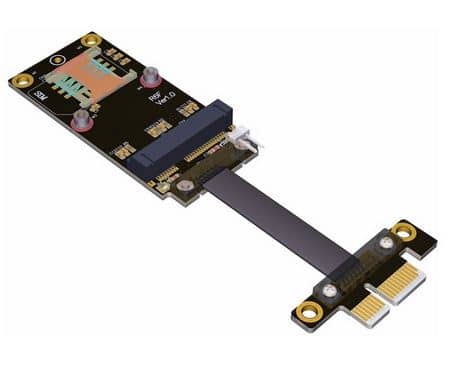 Physically, these are two different standards, but they perform the same task of allowing the installation of expansion cards on a motherboard.

Furthermore, they are electrically the same, as they each offer a one-lane data connection with the chipset.

To use a mini PCIe device on a PCIe X1 slot, you will need a mini PCIe to PCIe X1 adapter.

These are fairly affordable and are a great choice if you want to do things like using your old laptop’s network card on your desktop computer.

You will get the same reliable and fast performance over the PCIe bus as expected.

It is normal to wonder, is mini PCIe the same as PCIe X1. The main cause of this confusion is the fact that these are typically used for the same purpose and they use the same kind of data transfer bus on the motherboard.

However, these two represent different configurations of expansion slots that work with different devices.

With different sizes as well as different pin counts, you see that these are incompatible standards, that is you can not interchange them.

The only way to use them interchangeably and still make them work is by using an adapter card.