PCIE vs USB WiFi – Which is Better?

Desktop computers that come with onboard Wi-Fi are few. This leaves many users who wish to connect wirelessly with two popular options, either get a USB dongle that can work as a Wi-Fi antenna or get a PCIe card that you can install in your computer and work with instead.

So when it comes to PCIe vs USB WiFi, which one is better?

Basically, both options are great for the average user and will each come with their pros and cons. PCIe WiFi cards have better network quality and range, but they are not mobile and are more expensive. USB WiFi cards are cheap and easy to use.

Below we read in depth about the two options.

Quick Navigation hide
1. What is PCIe?
2. What is PCIe for?
3. PCIe WiFi
4. USB Wi-Fi
5. Comparison Between PCIe vs USB WiFi
6. What Other Option Do You Have?
7. Conclusion

The term PCIe refers to a set of standards that were developed for connecting high-speed devices to a motherboard. In full it stands for Peripheral Component Interconnect Express and it’s been around since the early 2000s.

The standard has evolved with each new iteration improving on speed and bandwidth from the previous one.

What is PCIe for?

PCIe is great for when you need to extend the functionality of your computer or improve something. When you find a feature you’d like to add and there’s an expansion card for it, the said card in a modern computer will go into a PCIe slot.

The card will typically come with one or more antennas that improve network reception. This increases the capability of the card to facilitate faster network speeds.

PCIe Wi-Fi cards from reputable manufacturers portray better performance and some have speeds that can come close to those of Ethernet networks.

To use a PCIe Wi-Fi card, you’d have to install the card into a free PCIe slot on your motherboard. An X4 slot should be enough to supply the needed bandwidth.

To do this, you will need to open up your PC case. Once this is done, find a PCIe slot you can use and plug in the card correctly depending on your manual.

You may also need to screw it in place for further support. Before attempting this, be sure to earth yourself to discharge any electrostatic charges that can damage your system.

Once the drivers are installed, your card will be ready to use.

Cards that come with multiple antennas usually perform better than single-antenna cards in the same scenarios because the antennas can be oriented in multiple directions, therefore, providing better coverage. 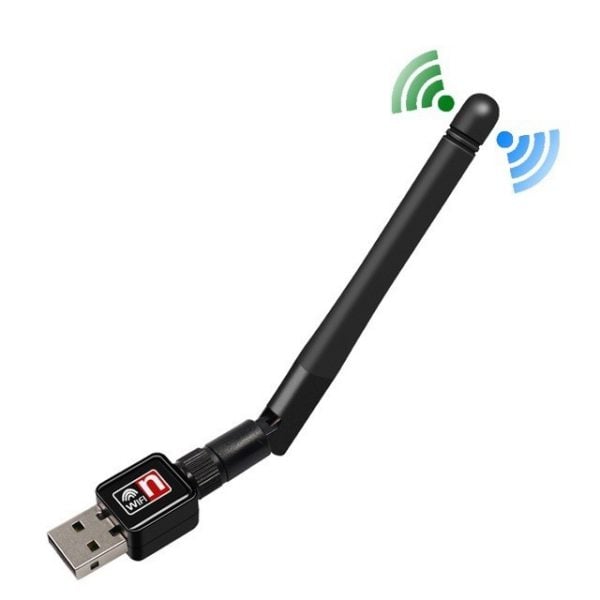 Sacrificing performance for a more compact size, USB Wi-Fi adapters are the best for people who just want a Wi-Fi connection without the need for high performance and mildly complicated setups.

Just as the name suggests, USB Wi-Fi adapters get fitted into USB ports and from there can connect the device to a Wi-Fi network.

With their ease of setup, these components can prove very useful for both novice and expert users alike.

Unlike with PCIe Wi-Fi cards, USB Wi-Fi is very simple to set up. You will hardly need any equipment. With a free USB port on a computer, you can go ahead and plug the device in. Once the drivers are correctly installed, you will be ready to go.

One thing to note is that if you want better performance, it would be best to plug the device into a USB port that supports fast speeds.

The performance of a USB Wi-Fi adapter depends on a lot of factors including the USB port that it is plugged into. Nevertheless, speeds of up to 867 Mb/s for a 5GHz band network and 400 Mb/s for a 2.4 GHz band network can be achieved by some of the fastest ones.

This is enough for most heavy internet tasks like HD video streaming, however, serious online gamers and streamers may frown upon these speeds.

Comparison Between PCIe vs USB WiFi

Having options lets users exercise their choice between a wide varieties of goods.

Wi-Fi PCIe cards are usually preferred by demanding internet users who want fast speeds, high stability, and more bandwidth. It’s also ideal because the card sits inside the case on the motherboard’s PCIe slot, hence freeing up the USB slots for other items.

Just as they are high-performance devices, you also expect a higher price tag with PCIe Wi-Fi cards. While you can get some bargains, Wi-Fi cards are typically more expensive than USB adapters.

USB adapters provide decent speeds and average users will be pleased with their results. While they do get in the user’s way sometimes, especially those with antennas, USB Wi-Fi adapters are usually the easier option to install and use.

They may be slower, but they are very portable and unlike PCIe cards, they can be used on laptops as well.

Furthermore, USB WiFi cards are at an average, much cheaper than the PCIe counterparts.

Finally, to install a PCIe WiFi card, you need to have a free expansion slot and a free PCIe lane.

Say for instance your PC has 16 PCIe lanes and you already have a graphics card installed which are designed to take up all 16 PCIe lanes, then your PCIe WiFi card will not work. A typical computer has 20 PCIe lanes.

Moreover, you will need to make sure that the intended PCIe slot is exposed not blocked by other expansion cards. Sometimes, a large graphics card can block the smaller PCIe expansion slots nearby.

With USB, that is usually not the issue. Most of the computers have plenty of USB slots. If you do not have a free USB slot, you can simply get a very cheap USB hub to extend the amount of free USB slots.

What Other Option Do You Have?

If you do not like PCIe or USB WiFi options, do you have any other option?

Well, you most certainly do with Powerline adapters.

A powerline adapter is a device that can allow internet connectivity over your existing electrical connection.

The benefit here is that you can literally achieve speeds as fast and as stable as an Ethernet connection using two powerline adapters.

To do this, you would basically put adapter one near the modem and the other near your computer. The setup would literally give you a lag free experience.

Powerline adapters are generally used by those who want the fastest latency, such as gamers, and in scenarios where the modem is located at a distance, such as in a multistory home.

If your modem is already placed quite close to the computer, then you won’t find much use of the powerline adapter.

For two kinds of devices that do the same thing, PCIe Wi-Fi cards and USB WiFi adapters are very different. They are installed differently and also perform quite differently.

One is ideal for power users who want faster and more stable networks and the other which can still provide above-average speeds, is more prominent among regular computer users.

When it comes down to PCIe vs USB WiFi, a user will be required to answer some questions, most important of which are what performance levels they’re looking for, whether they have the right ports and what their budget is.