Ever since SATA debuted in 2000, it has become the dominant interface for connecting storage devices such as hard disk drives (HDD), solid-state drives (SSD) and CD drives to a computer. This connection is established through SATA ports employing SATA cables. Therefore, you might want to know what does a SATA port look like?

A SATA port comprises two connectors known as a data connector (seven-pin and L-shaped) and power connector (fifteen-pin and L-shaped). On a motherboard, you will find various seven-pin L-shaped data connectors for connecting to hard drives and optical drives. Depending on the motherboard model, these may be color-coded and labeled and numbered (on the board) to specify the SATA generation they represent and the number they have.

Below we look in detail at how the SATA port looks like.

Table of Contents show
What Does a SATA Port Look Like?
SATA Port Defined
SATA Ports on a Motherboard
SATA Versions and the Color Coding of the Ports
Labeling and Numbering of SATA Ports
The Appearance of an eSATA Port
Conclusion

If you have used or are using a computer in the last ten to fifteen years or so, you are certainly using a Serial ATA (SATA) drive that’s connected to your computer’s motherboard.

While building a PC or upgrading the drives especially, you come across SATA ports. Naturally, a question comes into mind about the appearance of a SATA port and its characteristics.

This question is important because it will help a user to understand more about the SATA interface and how to correctly install a drive on his/her computer.

We will cover here the answer to the question as to what do the SATA ports look like.

Also Read: How to Add More SATA Ports to Motherboard?

A SATA port (also called a connector) is commonly dubbed as a slot in which a cable is plugged between the motherboard and the storage drive. However, the SATA interface comprises two ports. These are the data connector and the power connector.

On the other hand, the SATA power connector is found on the SATA drive and is an extended L-shaped fifteen-pin connector. Its purpose is to supply electricity to the drive utilizing a SATA power cable that projects from the PSU (Power Supply Unit).

Note that both data and power cables are needed for a SATA drive to work.

SATA Ports on a Motherboard

Typically SATA connectors are arranged in a row that lies behind the PCI/PCIe slots along the edge. There may also be other locations of the connectors as well as this depends on the motherboard.

There’s also a SATA controller behind the ports that’s responsible for managing or directing the flow of data. It’s a chip that is soldered onto the motherboard.

SATA Versions and the Color Coding of the Ports

If you open your computer’s case and do a visual inspection of your motherboard, you will find that there are different colors for SATA connectors. Usually, this depends on the motherboard model and the SATA version.

If a motherboard has a single SATA version across the board, then there may not be any color code to worry about. However, if you have an older motherboard that utilizes older and newer SATA version, then they can be color coded.

You may find SATA 3 connectors that appear as blue. They have the fastest data transfer rate of 6 Gb/s and you can connect a SATA 3 drive to get the maximum benefit out of the interface.

The SATA connectors don’t need to have these colors. You can find any color or color combination for the connectors which varies by the motherboard model. You can consult the manual of the board model to identify SATA ports by their colors.

Labeling and Numbering of SATA Ports

It’s not uncommon that SATA ports may also be labeled on the motherboard around them to specify what fastest speed a port supports. SATA 3 connectors may be labeled as SATA3 or SATA 6Gb/s for the speed they support. SATA 2 connectors may have a label of SATA2 or SATA 3Gb/s.

You should note that the labeling helps in easy identification of the ports to connect your drives.

It’s also usual to find that the SATA ports are also numbered. In a motherboard with 5 SATA ports, you may have ports numbered as 0-4 or 1-5. This depends on the number of ports a specific board feature.

Some manufacturers recommend connecting your bootable drive to 0 port and your secondary drive (if you have it) to port 1. We reiterate that this may not be necessary, and you can use your drive to any port of the same SATA generation.

The Appearance of an eSATA Port 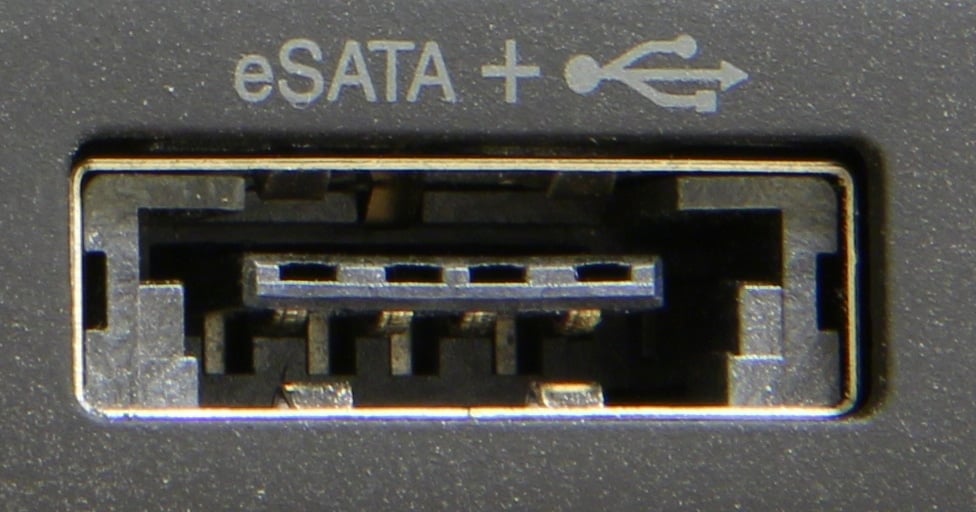 If you have an old PC, then your computer may have also one or more eSATA ports that allow you to connect external hard drives. As you see, eSATA stands for External Serial ATA and makes use of an I-shaped connector that is different from the L-shaped connector of the SATA interface. Furthermore, don’t confuse it with SATA 1 generation.

Therefore, eSATA cables are different from internal SATA cables and are shielded. Like SATA, eSATA is also an interface to transfer data between devices.

This port isn’t so common since it has been more or less replaced by faster USB ports and the Thunderbolt port.

In this article, we explored the SATA ports and its appearance on both the motherboard and a storage device. We also had a look at the appearance of an eSATA port and how it differs from the SATA interface.

This answers the question many of you have in your minds: what does a SATA port look like.

We expect this would help you in understanding the SATA interface easily. You can use this information to upgrade your internal storage devices as well as connect an external drive to your computers.