Why is a Motherboard Important? – 6 Reasons

Motherboards are fairly complex instruments. Essentially, every computer has one and it plays many different roles.

Earlier computers didn’t have motherboards but they still worked using backplanes. These were passive boards that had no controllers or basic I/O chips installed.

So why is a motherboard important? Modern motherboards are basically the main building block of a PC. If CPU is the brain, then motherboard is the body of a computer.

Quick Navigation hide
1. Understanding the Motherboard
2. So Why is a Motherboard Important?
3. In Summary

Also Read: What is a Motherboard?

Before we get into the nitty-gritty about what makes motherboards so important, it is essential to first understand what a motherboard is and what it does.

In a simple definition, a motherboard is the main board on a computer and on the most basic level, it is a circuit board. However, calling it a mere circuit board would be an understatement.

Motherboards are specialized circuit boards that have expansion capability with multiple I/O slots as well as various controllers and support for processors.

From harddisk to graphics card, essentially, these connected components are nothing more than large specialized circuit boards aka daughterboards.

Motherboard let you integrate many different components from different manufacturers to increase functionality and customize your setup.

As such, many boards can be connected to the motherboard and these boards also follow a standardized model. For example harddisks connect to SATA slots, RAMs are inserted into DIMM slots, processors into their dedicated sockets and graphics cards into standard PCIe slots.

Essentially, being the main board in the computer means that the most important components are attached to the motherboard.

The modern motherboard is a very sophisticated printed circuit board. It has circuitry that performs many different functions and allows the various parts of the computer to function seamlessly.

Motherboards, in essence, facilitates communication between processor and the different components of a computer.

The main component held by the motherboard is the CPU. This is responsible for most of the computing your computer does and all of it if you don’t have a separate GPU which handles all the graphics processing.

The CPU will always come with a built-in graphics processor that handles the drawing of the User Interface as well as for providing display output ports should you PC lack a dedicated graphics card.

You need storage and memory and these also have their slots on the motherboard. RAMs fit in DIMM slot and storage fits in SATA or M.2 depending on whether it is HDD or SSD.

Motherboards will also come with networking components for both wired and wireless connections. Some will, however, require a separate Network Interface Card (NIC) to be installed.

Two of them most important expansion protocol motherboard offers is SATA and PCIe. PCIe offers tremendous amount of bandwidth and transfer speed and thus it can support highly sophisticated components like graphics card.

All motherboards essentially work the same to a degree. Some of the differences that arise in performance can be attributed to the way the motherboard is configured, the kind of components attached to it, the type of board and the working conditions it is in.

Motherboards may differ in terms form factor, expandability and compatibility.

So Why is a Motherboard Important?

We now have a good idea of what the motherboard does and from that understanding, we can begin to see how this component is very important.

1. It Connects all the Other Components

The components discussed above are few compared to the actual contents of the motherboard. This device is tasked with connecting thousands of little components and multiple larger ones, including additional boards.

This is done to ensure that all the resources of the computer can be accessed when needed by the device that needs them.

So, when you’re copying files from your flash drive to the computer’s hard drive, the motherboard provides not only the ports but also the channels to move that data from the origin to the destination.

Other than the external components, the motherboard itself is filled with key components such as buses that carry signals from one component to the other.

The clock sends out a signal after a given interval. This lets all the components know when to work and when not to. This prevents the many different components from sending a signal at the time when the components that are the intended destinations are not ready to receive it.

The other components only work when the clock is high and when it’s low they too remain dormant. This change happens many times in a second so it’s almost impossible to notice.

One crucial chip found on a motherboard is a ROM chip for BIOS. BIOS  offers all the necessary instructions as well as settings for the computer to boot.

Without a BIOS chip, your computer would NOT start. BIOS stands for basic input/output system and it is the first program the processor accesses to get the computer started.

4. Contains the CMOS Battery and Chip 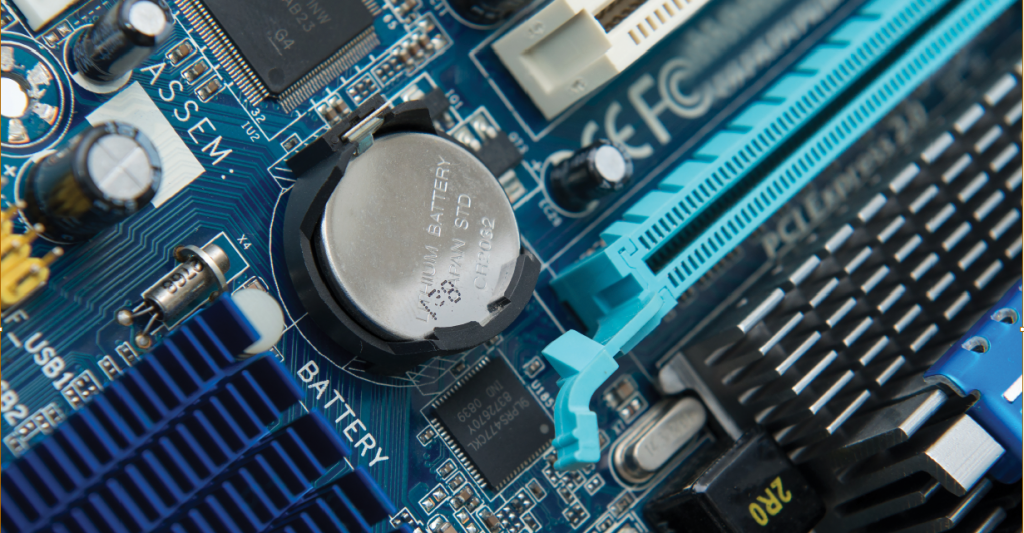 The CMOS battery is an important component as it helps keep the CMOS chip that maintains the system’s configurations up and running even when the computer is switched off.

The motherboard houses this battery. This lets you persist information such as important hardware settings and the system time. As a result, you may have noticed that the computer will tend to “remember” the time even when you shut it down.

This CMOS battery contained in the motherboard keeps the clock running even when the computer is off.

Different motherboards have different capabilities. This means that they will also not have the same capability when it comes to ports and expansion.

Nevertheless, with many larger motherboards such as the EATX form factor boards, you get multiple expansion slots for things like graphics cards and extra memory.

You also get several extra external ports for connecting things like storage devices and external hardware like keyboards and mice.

Being the main contact point for all the components of a computer, it also makes sense to have the main power supply connections run over the motherboard.

This allows all the board’s subsystems and other connected components to get access to power.

However, larger components like graphics cards and Hard Disk Drives require a separate power connection of their own.

Motherboards are very important to the functioning of a computer. Without them, we’d still be using archaic passive backplanes which were inefficient and quite cumbersome.

Why is a motherboard important? Basically, motherboard is the orchestrator of every thing that goes around in a PC. It connects components and allows communication between them to occur.

In other words, the motherboard is the body, CPU is the brain and the rest of the components are the limbs of a PC.