Users who want maximum performance from their rigs have the option of installing and running dual graphics cards on their motherboards. NVIDIA offers this via SLI. Some things about this can be confusing though. Let’s see why is second SLI PCIe 8.

The simplest reason for the second SLI PCIe to be x8 is because systems have a limited amount of PCIe lanes coming from the CPU. A 16X slot uses 16 lanes. If you have two 16X slots that will amount to 32 lanes and no personal computer have that many amount of lanes. Only the extreme processor offer a very hgih lane count. Hence, they are bifurcated when you install two graphics cards.

A 16-lane PCIe connection (third-generation) offers about 16GB/s of bandwidth on PCIe v3. For cards in SLI, this will mean 32 GB/s if on dual X16 slots for example. But getting a CPU with this many lanes or even a board is expensive, and the benefits won’t be as noticeable.

Furthermore, not many tasks can fully saturate an X16 PCIe connection. Even a high end graphics card will not saturate the X16 PCIe slot at V3.0 PCIe let alone the newer PCIe v4. Hence dividing the lane count will result in minimal difference.

Quick Navigation hide
1. Why Is Second SLI PCIe 8?
2. Is there are Performance Different When Using Graphics Card on X8?
3. Getting Around the Bottleneck
4. AMD Cross Crossfire
5. Conclusion

Why Is Second SLI PCIe 8? 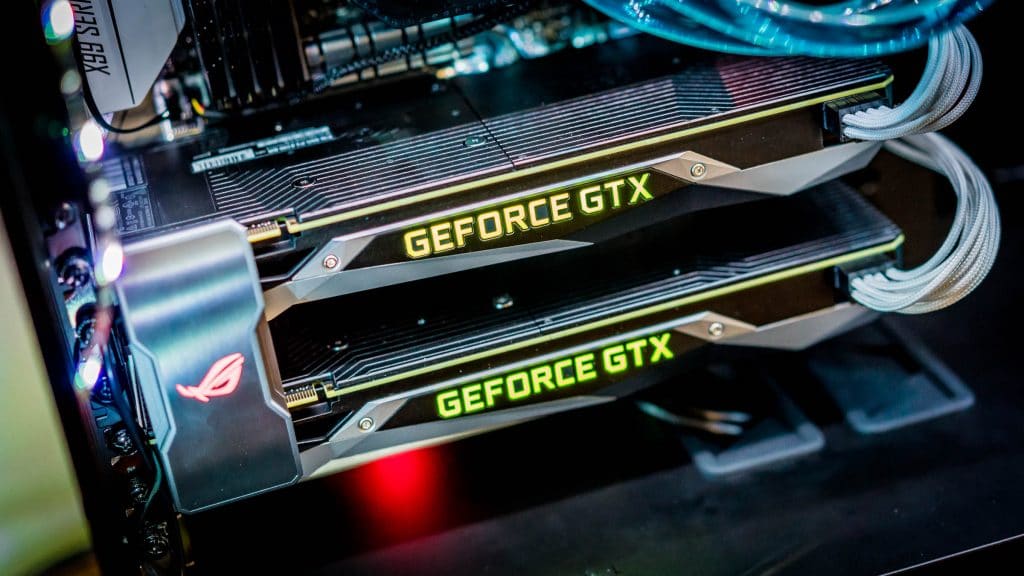 To understand why is second SLI PCIe 8, it’s crucial to have an understanding of what lanes are and how they matter to the performance of a setup SLI.

What is SLI and Why Does SLI Diving the Lane Count?

The technology was first introduced in the nineties by a company called 3DFX. The company was later acquired by NVIDIA who revamped the SLI tech and released it in the mid two thousand.

Initially, getting more graphics performance entailed getting a faster, and usually more expensive card. But with SLI, users could get a similar card as the one they had and plug it into a slot.

An algorithm would then split the graphics workload between the cards, enabling better performance. SLI allows users to install between 2 and four cards in one system.

What are PCIe Lanes?

PCIe slots transmit data through channels that are known as PCIe lanes. The lanes run from all the PCIe slots and offer an unshared connection to the chipset and the CPU. They have high data throughputs which are required by graphics cards.

There are a limited amount of PCIe lanes that come from the CPU which are the primary drivers of the graphics cards. A typical processor has 16 – 24 lanes depending on whether you are using the Intel or AMD.

Extreme processors which can cost as much as a gaming desktop have very high lane count.

The X16 slot is the largest one that can be found on most mainstream consumer motherboards. It has 16 PCIe lanes and for any given generation, offers the highest bandwidth available.

Graphics cards come with an X16 connector that fits into an X16 slot. Because they generate a lot of data, they need this slot with the 16 lanes to perform at their best.

With the most widely available PCIe generation, PCIe 3.0, the 16-lane slot will allow transmission of data at up to 15760MB/s.

Whenever you’re installing a graphics card, this is the first slot that is recommended for use. However, with SLI, you will be needing to install at least a second graphics card, and knowing what the X8 slot is will help you understand why is a second SLI PCIe 8.

What is the X8 Slot?

Just as the name suggests, the X8 slot offers 8 data lanes for use. It will mostly have a physical construction that looks exactly like the X16 slot. However, you get fewer electrical connections and data transfer lanes.

This slot’s bandwidth is half that of an X16 slot and hence, its data throughput isn’t as high.

However, when you’re setting up your SLI, you may notice performance falling into the X8 side of the fence. Here’s why.

Computers come with a fixed number of PCIe lanes that they support. This cannot be changed and it plays into why is second SLI PCIe 8.

If you get a second NVIDIA card and SLI them, both cards will use 8 lanes each. What you notice is that you still use the same 16 lanes, but with SLI, you will reduce the load on your cards and also get better performance.

The reason this happens is that the CPU will not be able to handle the extra data from the new card as it’s physically incapable of doing that. So, instead of ignoring one card, with SLI, both cards will run, albeit each at reduced capacities.

The main bottlenecks for SLI are the lanes on the motherboard as well as those on the CPU.

With motherboards, you also get a fixed number of lanes. These move data around via the PCIe bus. Many motherboards have just 4 lanes that can be used to add extra addin card.

Is there are Performance Different When Using Graphics Card on X8?

Gamersnexus.net has a great guide on this where they explore the performance drops.

You can see that there is a maximum of 1% performance drop when using a graphics card in an x8 slot. This is nothing compared to the performance boost you will receive from an SLI setup.

Getting Around the Bottleneck

If you still want to get around the small bottleneck then there is one way to do so.

You can get around this caveat by using a processor that has more lanes. Having more lanes offers more links with access to the CPU. If you get a motherboard that has at least two X16 slots and couple it with a processor with at least 32 lanes, you will be able to SLI both cards at X16.

The problem with this is it’s expensive as it involves getting a new expensive processor and maybe even a motherboard.

Just as NVIDIA has Scalable Link Interface (SLI), AMD offers an alternative for their GPUs known as Crossfire.

It does pretty much the same thing, allowing users to install and use multiple cards in parallel on a motherboard. You get a better gaming and productivity performance with the setup.

The best part about AMD crossfire is that it can be done on a mere X4 slot and thus on relatively cheap motherboard AND the GPU do not have to be identical.

The main reason as to why is second SLI PCIe 8 hinges on PCIe lane limitations. Several factors go into this as we have seen.

Many processors aren’t able to support two cards running in X16, so having one card in an X8 slot and running both cards at X8 returns the balance. You still get the same number of lanes used but dual cards will give you better performance in games and other graphics-related tasks.