Cities skylines is one of the most CPU intensive game out there and if you are planning on building a gaming rig dedicated to this game, then getting the right CPU is one of the first steps.

For starters, unlike most of the games out there that are highly reliant on GPU and can do well with a mainstream CPU such as the Ryzen 5 or the Core i5 processors, Cities Skylines is hungry for a powerful.

This has a lot do with the fact that there are literally thousands upon thousands of assets to load and calculation to be made particularly when you city gets larger and the population grows.

Here we look at the best CPU for Cities Skylines from various budget and also talk about what kind of processor to get.

The official requirements for the Cities Skylines are more or less outdated. The processors mentioned here are no more in production. After all, the game is quite old and was released back in March, 2015.

On top of that, while the recommended requirements are great for beginner and casual players, for advanced players, the mainstream processors i.e the Core i5, as mentioned above, will not suffice.

And finally, the requirements make no mentioning of whether the processor scales well with multiple cores and whether a higher core count affects the performance.

Let us explore this a bit.

Does Cities Skylines Benefit from a High Core Count?

The benchmarks here are quite enlightening. The first is that a processor with a higher core count DOES NOT necessarily improve the Frame Per Second. Some scenes show the CPU with lower core count i.e Core i5-6600K perform better, whereas, in another scene the AMD Ryzen 7 1700X seems to perform better.

Overall though, the Frame Per Second performance is generally attributed to a better Single Core performance i.e a higher clock speed.

Basically, as your city grows, the game throttles the system resulting in slower simulation speed so that it does not tax the CPU performance much. This has all to do with the calculation happening instantaneously. Large the cities, the more calculation need to be done.

Since a processor with a higher core processor can perform multiple simultaneous calculations, it can maintain a fairly stable simulation speed even for much complex cities.

So what is the Key takeaway. How many cores and threads should you aim for?

Generally, the opinion is that the game does not benefit much from a processor that has higher than 4 cores / 8 threads. Again, while this may be true for the frame rate, it does not turn out to be true for the simulation speed.

In our opinion, single core performance should be the primary attribute to look for. Meaning, we recommend going for a processor with a higher clock speed as supposed to a higher core count as the primary target.

Fortunately, even the newer mainstream processors these days offer 6 cores and 12 threads. This should help you maintain a good frame rate given that you have a good GPU to accompany and enough RAM to handle all the assets.

If you have a higher budget, then you can look into high performance or extreme processors that feature 8 cores or more with multi-threading enabled.

A mainstream Intel processor with 6 cores and 12 threads. Passmark score of 14617.

First up we have one of the most recommended CPU for gaming in general and Cities Skylines in particular.

In most cases and city complexity, this mainstream processor should suffice. It offers 6 cores and 12 threads with 4.8 GHz max clock speed making it far more capable than the Intel Core i5-3470 highlighted in the system requirements.

However, as we have made it clear earlier, Cities Skylines is a very CPU intensive game. Unlike other games such as Shooter or RPG games where the GPU takes the brunt of work involved in maintain frames per second, in Cities Skylines, it is the processor.

As is the case with all simulation, be it professional CAD simulation or a simulation game like Cities: Skylines, there are simply a lot of calculations that need to be performed simultaneously for thousands of assets.

For this, a powerful processor becomes very important. This is one of the best CPU for Cities Skylines because it is reasonably priced, within most gamer’s reach, and offers a great overall specs.

Next up we have another very popular mainstream processor. If your next gaming build is centered around an AMD system, then this is one of the best CPU for Cities Skylines.

The fact of the matter is that this processor and the Intel Core i5-10600K above both have comparable performance. You cannot go wrong with either if your intention is to build a mainstream gaming build.

There are certain goodies that in our opinion makes this a better overall processor for some. For starters, it offers PCIe v4 protocol. The Intel i5-10600K does not and still operates the older PCIe v3.0 protocol.

Furthermore, this processor comes with support for 3200 MHz RAM right off the bat, the Intel processor above support 2666Hz RAM – you can overclock the speed however.

The only drawback with this Ryzen 5 3600x in comparison is that it features a lower clock  speed of 4.4 GHz as compared to 4.8 on the Intel above. As for the core and thread count, it offers the same 6 cores and 12 threads as the Intel Core i5-10600K above.

One of the latest and the greatest processors currently available in the market for mainstream gaming industry. While this is still a 6 core and a 12 thread processor like the AMD Ryzen 5 3600X above, it performs phenomenally well in comparison.

It does have a higher price tag though. It uses the same AM4 socket used by the previous Ryzen processors and also features the PCIe v4 support.

Next up we have a high performance Intel processor for those who have a decent budget to spend on their build for Cities Skylines.

For starters, this processor has an excellent Single Core performance of 5.1 GHz per core. It features 8 cores and 16 threads. So this is already an overkill for casual Cities gamer.

This is a processor that most pro Cities: Skylines gamer would recommend. The higher clock speed would help maintain excellent frame rate and the higher core count would help in maintaining great simulation speed. Hence for an overall high performance Intel build, this is one of the best CPU for Cities Skylines.

Besides that, high performance processor such as this are also great for professional productivity. If you are video editor, designer, etc, then this again is more recommended that the mainstream processors above.

This is AMD’s answer to the Intel Core i7 new gen processors above. Again, both this and the above mentioned processors are great for a high performance builds.

In the end it all falls upon your choice of gaming build. Do you want to go with an AMD setup or an Intel setup.

Like the mainstream processors above, this too comes with PCIe v4 support as well as support for higher frequency 3200 MHz RAM off the bat.

However, it has a lower clock speed of 4.7 GHz max as compared to 5.1 GHz max on the Intel Core i7-10700K above. However, despite having a slower clockspeed, this processor beats the 10th Gen Core i7 processors in single core performance by a long shot both in Cinebench R20 scores as well as in Passmark. 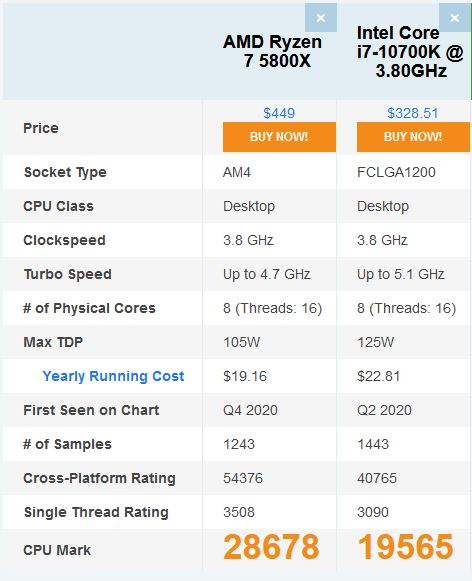 All in all, for an AMD high performance build, this is the best CPU for Cities Skylines.

With this processor, we enter the realm of extreme gaming or low-level workstation processors. These processors are only second in line to the multi-grand workstation grade processors like the AMD Threadripper or the Intel Xeon.

Basically, if you want the best possible single Core performance for maintaining high frame rate, want to run the game on multiple monitors, perhaps have another app open at the same time, multitask all at once, then this is one of the best CPU for Cities Skylines gamers.

The processor features a max 5.3 GHz clock speed with 10 cores and 20 threads.

This is the AMD counterpart of the Intel Core i9-10900K processor. Again, this is a low-level workstation processor but suitable for extreme gamers.

The processor features a slightly different core configuration as compared to the Intel Core i9-10900K processor. It has a higher core and thread count of 12 cores / 24 threads.

As such it has a much better multi-core performance as compared to the Intel Core i9-10900K processor above.

Unfortunately, it has a lower max clockspeed of 4.6 GHz as compared 5.3 GHz on the Intel counterpart above.

Essentially what this means is that while you may suffer from lower frame per second as compared to the Core i9-10900K, the simulation speed will be better as your city gets complex thanks to the higher core counts.

Again, for extreme gaming, this is one of the best CPU for Cities Skylines.

The list of the best CPU for Cities Skylines are all from the latest generation of Intel and AMD processors. You can always go for older gen CPUs if you can find a good overall deal just make sure you look at the benchmarks when choosing.