How Many PCIe Lanes Does Ryzen Have? – Learn Here

You may have heard that expansion card slots use things known as lanes for data transmission. The lanes connect the slots to the chipset and the CPUs for fast data transfers. But not all CPUs are equal, so let’s see how many PCIe lanes does Ryzen have.

It all depends on the processors. Current desktop Ryzen 3000 CPUs have 24 lanes. These are made so that the GPU can take at least 16. On Ryzen 4000 CPUs for mobile devices, users get upto 16 lanes for the discrete graphics cards. On the latest 5000 series you can also find 24 lanes. Only the AMD Threadripper processor can feature between 64-128 PCIe lanes.

The number of lanes on the processor also varies with the different architectures as well as the uses for the processor.

Some server processors like the AMD EPYC Rome has 128 PCIe lanes, however, here we’ll focus more on the mainstream consumer chips.

How Many PCI Lanes Does Ryzen Have?

If you want to install expansion cards on your Ryzen PC, it’s important to know how many PCI lanes does Ryzen have.

Because there are numerous processor models available, Let’s see how many PCIe lanes does Ryzen have with regards to the different CPU generations.

Much like any other CPU, Ryzen chips provide a way to take in data from an installed graphics card or various other peripherals in the form of lanes.

How Many PCIe Lanes on Ryzen 3rd Generation?

This line of consumer processors is very popular among users. It is based on AMD’s Zen 2 architecture. One key characteristic among processors from this lineup is the availability of a generous supply of lanes.

AMD Ryzen 3000 series and all the processor under this ranging from from Ryzen 3 all the way to Ryzen 9 feature 24 lanes.

The Ryzen 9 3900X with 12 cores and 24 threads also has 24 PCIe Gen 4 lanes. With this, you can have a graphics card running at X16 and still have 8 more lanes that can be used by NVME slots for faster storage.

Of the 24 lanes, only 20 are made available to the user for their card. You can have a GPU occupy 16 lanes and an NVMe card may use the remaining.

Four lanes are dedicated to the chipset which connects several other devices.

This gives users the ability to install more expansion cards without having to lower the bandwidths of their already-in-use PCIe lanes.

How Many PCIe Lanes on Ryzen 4th Generation?

For users who are looking into how many PCI lanes does Ryzen have, it’s great to consider this line of chips as well.

Ryzen 4000 is aimed more at the market segment for laptops and mobile devices and provides a great budget for computers.

This line of chips is based on AMD’s Renoir architecture with Zen 2 and the processors also come with integrated Vega graphics.

How Many PCIe Lanes on AMD Ryzen Threadripper?

A lot of hype surrounds this line of CPUs and for good reason. They offer remarkable performance and are some of the best CPUs for people who do a lot of CPU-intensive work.

The Threadripper 3990X, for one, has 64 cores and 128 threads which until its release, was unheard of.

But, the icing on the cake is the unit’s support for up to 64 PCIe lanes. These are all Gen 4, of course, and if anything, it offers a lot of flexibility with expansion cards and storage.

At 64 lanes, users can easily SLI three cards and still have enough lanes for several other peripherals including some NVME slots which take up about 4 PCIe lanes.

8 lanes are provided for connecting to the chipset, these deliver a bandwidth of up to 16GB/s.

On the lower side, the Threadripper 1920X has about 12 cores and 24 threads. The lanes are also fewer, but still, many compared to other chips. It has 44 PCIe lanes which you will still be able to do a lot with.

How Many PCIe Lanes on Ryzen 5th Generation? 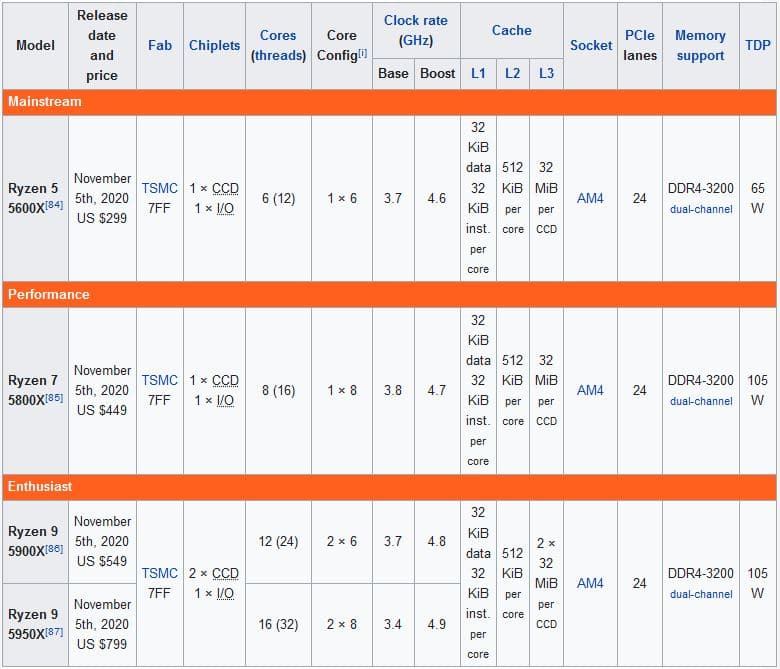 AMD has recently released new processors for the Ryzen 5000 lineup. These new chips are based on their newer Zen 3 architecture and have had good performance both on paper and in benchmarks.

With these CPUs, users get 4 PCIe lanes that are dedicated for use with the Chipset for use with other hardware.

On the Ryzen 9 5900X there’s a total of 20 usable PCIe lanes. These are all from the fourth generation of PCIe.

The Ryzen 5 5600 also has the same 20 PCIe lanes which will be adequate for expansion cards and storage.

Ryzen 5000 lineup has CPUs with up to 40 PCIe lanes. This is something more power users will be looking for as it offers better expansion capabilities.

Users also get better speeds with these devices. They show improvement compared to the previous Ryzen 3000s on several applications and they still maintain AMD’s overclocking capabilities.

How Many PCIe Lanes on Ryzen 1st and 2nd Generation?

Some chips from this older generation support up to 32 PCIe 3.0 lanes. Of these, only 24 are usable mainly due to the socket limitations. Still, 4 lanes go to the chipset.

There are also models that feature a mere 20 lanes such as the AMD Ryzen 7 2700X.

We’ve seen how many PCIe lanes does Ryzen have. The actual number of lanes varies depending on the given processor as well as its generation.

Most regular users won’t need very many lanes as only some basic expansion cards like graphics or PCIe based storage devices will be installed.

However, some high-performance chips meant for heavy workloads like those from the Threadripper family come with a generous supply of PCIe lanes.

Lane performance will vary based on the PCIe generation. The fourth offers almost double the performance of the previous one, and much newer AMD CPUs support these lanes.