What Happens If You Don’t Use Thermal Paste? – Learn Here

Thermal paste, also known as a thermal compound, is a chemical compound that’s used as an interface between two surfaces to allow more effective heat transfer. It’s used in computers to facilitate cooling and particularly of concern for a user when putting a cooling fan on a CPU. So, what happens if you don’t use thermal paste between CPU and the cooling fan?

Well, the simple answer is that your CPU will get hot if there is not thermal paste used. This would either shut your PC down as the CPU reaches its max operating temperature (TJ Max) or it can cause damages the CPU since it heats up a lot during operations. At the very least, high temperatures can cause your system to throttle, hence reducing its performance and efficiency.

It’s a widely accepted fact that a computer can run without thermal paste, and if you don’t have it available, some users may be tempted to operate without it. However, this isn’t advisable since the risk is always there, and toasting your system isn’t worth it.

What Happens If You Don’t Use Thermal Paste

Using your PC without applying any thermal paste is a bad idea. The computer will overheat a lot and you will not get the quality of service you require or expect. Here is what happens if you don’t use thermal paste.

This is the main problem that occurs when you run your computer sans thermal paste. Heat is not taken away from the CPU effectively, as such, the component overheats faster and more often.

There’s a set maximum temperature limit that a CPU can operate at safely, and reaching this will cause problems for the user.

Without thermal paste, heat doesn’t get dissipated well and you end up clocking these max temperatures more frequently.

2. Your CPU Will Throttle

Thermal throttling is a mechanism built into the CPU to protect itself against overheating. The basic working is that, once a certain dangerous temperature is reached, the CPU reduces its performance. This results in a lower power draw and ultimately lower heat generation but at the expense of a lower clock speed in return.

With this, the CPU can then cool down a bit to prevent overheating. Without thermal paste, the chances of reaching the throttle temperature are significantly increased, and you will end up running on a throttled PC.

While that keeps the chip safe, you will notice significant performance drops. Keeping things cool can save you from this hassle.

Very high temperatures can lead to overall system instabilities on your computer. These can result in frequent crashes and what is commonly known as “Blue Screen of Death” errors.

If you were working, this can result in irretrievable data loss or file corruption which may be costly or time-consuming to fix.

Overclocking lets you run your computer at a higher clock speed than the factory default. This typically involves driving more power to the CPU in a bid to boost its performance. It is advisable to have a good cooling mechanism when you decide to do this.

Overclocking results in higher heat generation, and this heat needs to go somewhere. If it isn’t quickly taken away, your computer can quickly become unstable which may result in a system crash or thermal throttling.

Besides time, operating temperatures also have a lot of weight in determining the longevity of your prized chip. Without thermal paste, you will be constantly operating at high temperatures.

This can effectively reduce the lifespan of the CPU, leaving you with only a fraction of its intended lifespan.

Electrical components tend to not like high temperatures. This may cause damage to any of the components on or around the CPU particularly the motherboard socket and sub components nearby.

Luckily, many CPUs nowadays have a kill switch that gets activated when it operates at too high a temperature for some time. The computer will automatically shut down, therefore preventing any damage.

Now that you know what happens if you don’t use thermal paste, let’s see how thermal paste works to your advantage.

Thermal paste provides an interface between the chip and the heat sink (or a cooling fan). While the bottom of the heat sink and the CPU’s heat spreader may feel smooth and look just as much to the naked eye, they have microscopic bumps and surface irregularities.

These irregularities prevent full surface contact between the heat spreader and the heat sink. As a result, air pockets that prevent effective heat dissipation get formed, reducing the cooler’s effectiveness.

The function of thermal paste is to fill these crevices and provide higher contact between the two surfaces. Thermal compound is thermally conductive, which is necessary for heat transfer. Electrical conductivity gets reduced to prevent potential short circuits.

How to Apply Thermal Paste 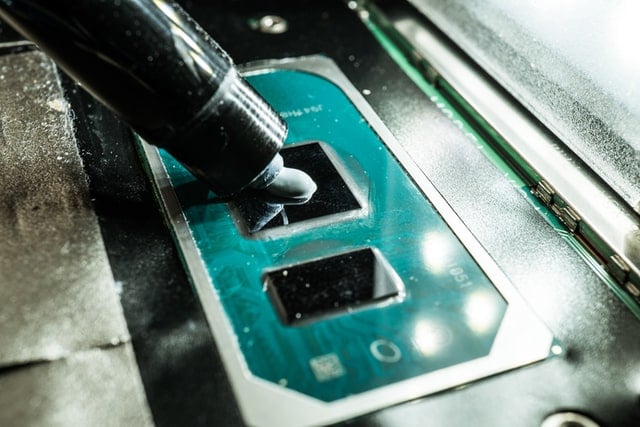 Before applying the paste, ensure you have your batch from a known and well-reviewed brand like Cooler Master to reduce chances of running into issues. That aside, there are various techniques for this depending on the user’s preference.

What matters most is that you get good surface coverage with no trapped air pockets in the paste. At the same time, you should ensure that you don’t overdo on the compound. Too much will spill out once you press the heatsink onto the board, and too little will provide very low surface coverage.

Some of the most commonly used methods are the “Dot”, “Line”, and “X”. There are others, including variations of these three.

Here, you draw a line across the surface of the heat sink. Some may use two or more lines. But just like the dot method, installing the heat sink spreads the thermal compound so you don’t need to do it manually.

Here, you draw an X with thermal paste on the heat spreader, intersecting at the center. The heatsink will take care of the spreading.

Again we recommend looking at the comprehensive and detailed article by Pudget System on the topic of how to apply thermal paste and what the best technique is.

When to Apply Thermal Paste

If you’re doing a new build, ensure you have thermal paste on standby as you’ll need it. As soon as the CPU is correctly installed in its socket and you’re ready to install the heat sink/cooler fan, apply the thermal paste.

You will also need to re-apply thermal paste when servicing or cleaning your PC particularly if you have to remove the CPU cooler. Once or twice a year should be good, just ensure you remove the old paste first.

Before applying the thermal paste on a new build, check to ensure that the heat sink does not come with a pre-applied thermal paste or thermal pad, and only apply the paste once you’ve ascertained that there’s none.

Using thermal paste is a good way to help keep your CPU temperatures down. It creates a conductive contact between the CPU’s heat spreader and your heat sink or cooler.

After reading what happens if you don’t use thermal paste, you do your utmost to make sure that your temperatures remain stable for your CPU to work effectively.

Applying thermal paste is straightforward. You need to ensure you have good surface coverage and without having any excesses. It’s also ideal to reapply thermal paste once in a while particularly if you remove the CPU cooler for a replacement.