What is a Hexacore Processor? – Learn Here

The speed of your processor dictates the time your computer will take to execute instructions. There have been significant advancements in processors over the years and multicore processors being the current trend let us discuss what is a hexacore processor.

A hexacore processor can be defined as an integrated circuit that is fitted with six independent units(cores) on a single die. These six cores act as mini processors that function collectively to make one single hexacore processor.

The hexacore is made with six cores so as to improve its multitasking capabilities. Since it has six cores, it is able to split tasks into six different units working independently hence improve performance.

What Is a Hexacore Processor?

This was an improvement to previous versions since besides having six cores, it also has 12 threads, a cache memory of 12mb, and a base frequency of 3.3 gigahertz that would go up to 3.6 gigahertz.

The main difference between processors lies in how it is equipped. By this I mean the specifications such as the processor speed, the number of cores, cache speed and also the power consumption. To better understand what is a hexacore processor let us look at the characteristics of hexacore processors.

What are Processor Cores? 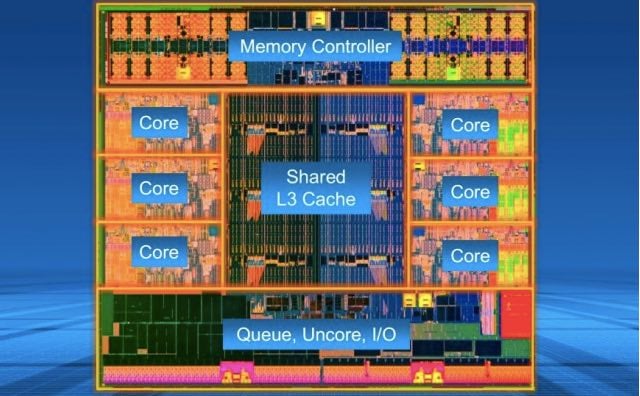 As discussed earlier think of the six cores in a hexacore processor as small processors found in the main CPU die.

Basically, instead of having 6 independent CPUs, in 6 different sockets on a motherboard, the CPU die itself is divided into sub processor called cores.

Each cores has its own sub components like the ALU, Registers and Cache memory.

With six cores this improves the speed of the processor. This is because with every core acting independently, each core can perform different tasks at once. This means that the multi-tasking ability of a hexacore processor would be superior compared to a processor with four cores (quad-core) or less.

However, it should be noted that not all programs and applications are designed for multicore environments.

For instance AutoCAD is highly depended on a single core performance of the CPU rather than how many cores it has. So for this application the single Core clock speed would matter the most.

For newer games, for instance, and also for video editing an rendering, the higher core count would matter.

The Threads in A Hexacore Processor

A thread can best be described as a virtual core in a processor. Intel uses hyperthreading while AMD uses continuous multithreading, commonly known as hypertransport, to breakdown physical cores into smaller virtual cores to improve the performance of the processor.

For instance, if the processor has  multithreading capability, the cores in a hexacore processor will be further broken down virtually to form a maximum of twelve threads.

The Cache Memory of Hexacore Processors

Both of these are hexacore processors but when comparing execution time, the AMD Ryzen 3600 XT would win slightly because of the difference in cache size.

While L1 and L2 cache memory are dedicated to each core, the L3 cache is shared between all cores.

The Heat Generated by Hexacore Processors

With faster processing comes more heat generated. When the processor is heated it needs to be cooled and the power dissipated by the cooling system required is measured in TDP (Thermal Design Power).

This means that the mentioned hexacore processors need a cooling system that can dissipate 45 watts of heat.

The TDP generally increases with the number of cores which means most hexacore processors probably have more TDP than quadcore processors.

But there are many other factors that determine the TDP, core count is just one of them.

How Do I Know if I Have a Hexacore Processor?

First, you can launch it by pressing control(ctrl) alt and delete at the same time. This opens a variety of options among them the task manager.

Then click on the CPU widget and below the graphs, you will see your core specializations. If the cores are six then you have a hexacore processor.

Hexacore processors are generally fast. Most of the hexacore processors have a base clock speed of about 3.3 gigahertz which when combined with a good graphics card is good for gaming and heavy tasks such as 3D designing.

An example of a fast hexacore processor is the AMD Ryzen 5 5600X hexacore processor which is well equipped for gaming with 6 cores, 12 threads, a base clock of 3.7 gigahertz and a boost clock of 4.6 gigahertz, and a cache size of 35mb. While a quadcore can also be used in gaming, having more cores gives the edge in performance.

Of course, if you are talking about cell phone based hexacore processors, then that it may have a completely different performance factor, but the generally idea stays the same.