What is AMD Equivalent to Intel Core i3? – Learn Here

The Core i3 is a line of entry-level CPUs from Intel. They provide the necessary performance for basic tasks and are used in entry-level desktops and laptops due to their lower power consumption and heat generation. Here, we look at what is AMD equivalent to Intel Core i3.

Basically, the closest AMD match for the Intel Core i3 processor is the Ryzen 3 line of CPUs from AMD. Much like the Core i3s, these CPUs are meant for entry-level systems that aren’t built for very high computing requirements.

Nevertheless, both chips fetch budget prices in the market. Of course, for a fair comparison of price and performance, you have to take into consideration the type and generation of Core i3 and the Ryzen 3 processors.

Here we look both the Intel Core i3 and the AMD Ryzen 3 processors in detail and see how they compare to each other.

What is AMD Equivalent to Intel Core i3?

We have already established that when it comes to performance and price range, AMD’s Ryzen 3 lineup is the closest equivalent to the Core i3s from Intel. 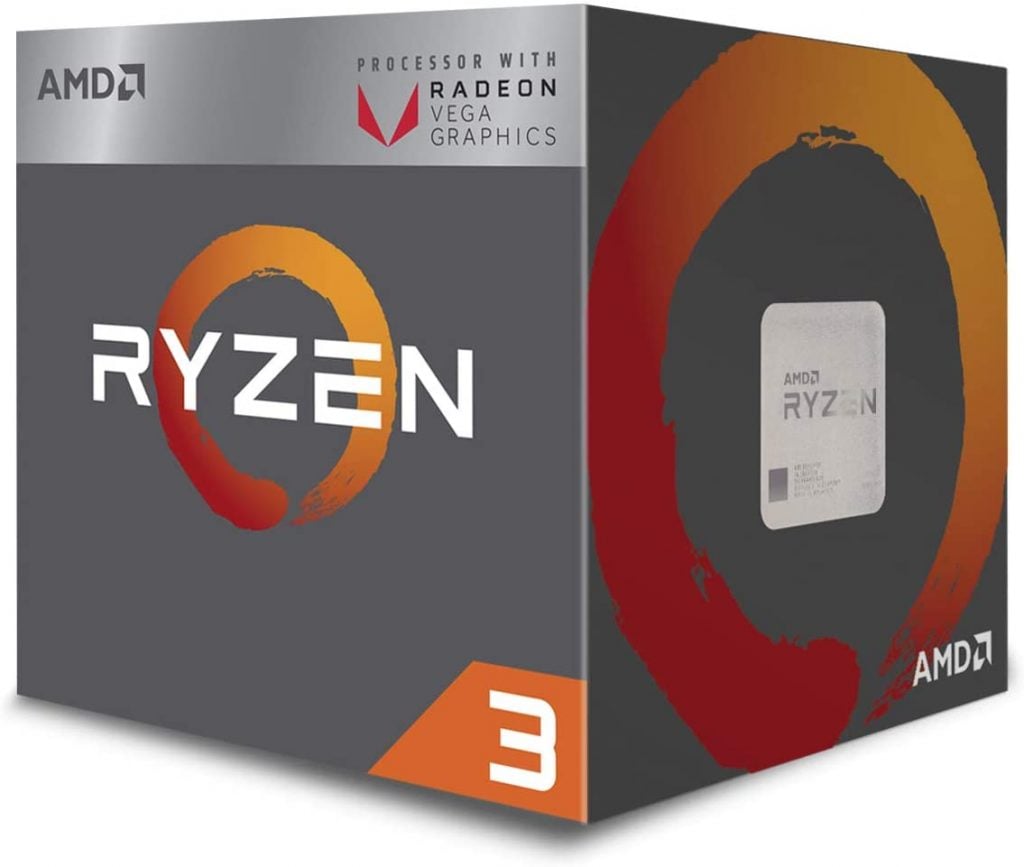 There are several models of CPUs belonging to Ryzen 3 family, each with different specs and features. Essentially there are three types of AMD Ryzen 3 processors that you can find:

Mobile based AMD Ryzen 3 processors have the “U” designation such as the AMD Ryzen 3250U processor. These consume lower power but have a lower clock speed and have fewer cores.

2. Desktop Based Without iGPU

These generally have the best CPU performance but they lack an integrated graphics card and hence cannot power the built-in video ports on the motherboards. Examples include the Ryzen 3 3100 and the Ryzen 3 3100X.

3. Desktop Based With iGPU

These are specialized CPU by AMD that come with an integrated VEGA graphics card. AMD has a special name for these processor, Acceleration Processor Unit (APU).

These CPUs are great if you do not wish to spend on a dedicated graphics card. The integrated graphics here would allow you to use the built-in video ports of the motherboard.

Also Read: What is AMD Equivalent to Core i5

Intel also has three types of processors, however, there is one significant distinction between the types.

The different lies in that Intel has a third type of processor called “unlocked” processors. These have a “K” designation which allow for overclocking.

Example include the 9th gen Intel Core i3-9350K processor. In the newer generation, unlocked Intel Core i3 processors are not yet available.

In contrast, all of the AMD Ryzen 3 processors are unlocked and are overclockable.

So in Summary, for consumer grade line ups,

Three types of Intel Core i3 processors are

The best way to compare the two processor lines is using the benchmark results from famous Benchmarking metrics like Passmark Or Cinebench R15.

When comparing the processor, you have to look at both the single core as well as the multi core performance.

On the other hand, rendering, transcoding, streaming, simulation and simulation games benefit more from multi-core performance of the CPU.

In the following text we will compare and contrast some of the popular and newer mobile and desktop based Intel Core i3 and AMD Ryzen 3 processors.

Note on the Generation

We had mentioned this earlier, but to reiterate this point, when comparing Intel Core i3 and AMD Ryzen 3 processors, you have to make sure that you choose a reasonable generation from both for a fair comparison.

There has to be a parity. For instance it would be unwise and unfair to choose a third generation Intel Core i3-3110M processor released in 2012 and compare it with 3rd Generation AMD Ryzen 3 3300X series released in 2020.

The two processors are 8 years apart and in CPU terms 8 years is an aeon.

The table above compares some top of the line Intel Core i3 and AMD Ryzen 3 processor from 10th and 3rd respectively. These two generations have been chosen because they both have a parity in release dates, specs and price tags.

As you can see, in both mainstream laptop and desktop based lines, both the Ryzen 3 and Intel Core i3 processor have almost similar results as well as specs.

The Intel Core i3-10110U does take a lead in the mobile based variants, but in the desktop based models, the AMD Ryzen 3 3300X takes the lead.

The iGPU based AMD Ryzen 3 3200G, however, is quite weak both in specs as well as in benchmark results.

Both chips are lower-end models in their respective lines. They are good options for users building PCs on a tight budget and have the necessary performance for basic day-to-day usage.

For both manufacturers, models range anywhere from 2 cores for mobile based chips to 4 cores for desktop based chips.

Support for multithreading is however dependent on the specific chip model since some Core i3s and Ryzen 3s have support for this and others don’t. So, they’re more or less the same in this regard.

They consume less power compared to the other chips in the same product line, that’s the i5, 7 and 9 for intel and Ryzen 5, 7 and 9 for AMD.

Among the new generations, the performance between some of the models in either line is almost at par, with small differences as seen in Cinebench R15 benchmarks, case in point is the Ryzen 3 3300X’s single core of 200 versus the i3-10320’s 206 points and multi-core score of 1129 vs 1080 for the two respective processors.

The Ryzen 3 is the closest equivalent to Intel’s Core i3 series in terms of performance, although with the different models and different generations available, there are variations in specs and performance.

It is quite common to ask what is AMD equivalent to Intel Core i3, i5 or i7 these days since AMD is gaining a lot of popularity but many are not aware of their processor line ups.

But essentially, both Ryzen 3 and Core i3 lines have sub $150 chips that perform well on entry-level systems and some even offer decent gaming performance for budget gaming rigs. They are ideal for people on a budget and even come in handy on mobile devices as they have lower TDPs and cooling requirements.