What Is AMD Equivalent to Intel Core i7 – Learn Here

When building a PC for heavy lifting and professional work, you will need to invest in a CPU that can handle heavier tasks that you throw at. To this end, what you are basically looking for is a CPU from the high performance category.

Both AMD and Intel have products for this use case. Intel has the Core i7s and if you’re wondering what is AMD equivalent to Intel Core i7, you’ve come to the right place.

So essentially, the AMD equivalent to Core i7 is the AMD Ryzen 7 processors. This is a family of generally high-performance CPUs that pack a lot of power, delivering up to 8 cores and 16 threads with copious amounts of clock speeds and overclocking capabilities.

When it comes down to a Core i7 or a Ryzen 7, the choice will depend on the exact features you need, budget, as well as the components you already have.

Compared to the mainstream Core i5 or Ryzen 5 processors, the Core i7 and Ryzen 7 are reserved for power users who multitasking or use professional software that scale well with multi core performance.

What Is AMD Equivalent to Intel Core I7? 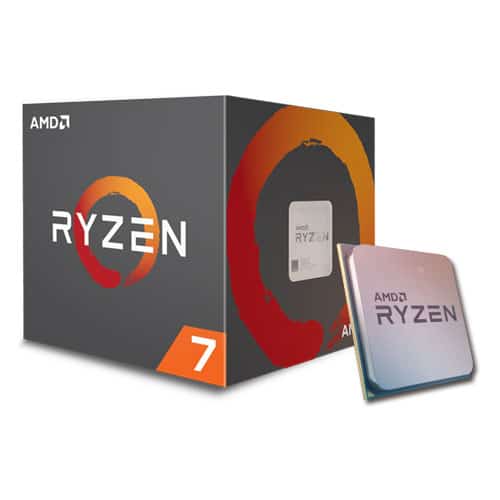 We have already highlighted that the direct comparison of Core i7 is usually established with an AMD Ryzen 7 processor. However, there are many more factors considered as well.

The Ryzen 7 was designed to be a direct competitor of Intel’s Core i7 lineup, and over the years, it has managed to stand its ground and offer performance improvements with each new generation.

However, when comparing, factors such as the generation, the architecture, built in graphics card, single core / multi core performance (and much more) is taken into consideration.

We talk about this below in a bit more detail.

So What is AMD Ryzen 7 Processors?

With this family of CPUs, you get numerous models designed for both desktop and laptops. You also get varying performance levels depending on the chosen configuration and the generation it’s from.

The current generation units are built on top of AMD’s Zen 3 architecture, codenamed Vermeer, and use the 7nm manufacturing process which results in a more power-efficient CPUs with lower TDPs at high clock speeds and a more efficient processor in general.

Knowing what is AMD equivalent to Intel Core i7 is just a small piece of the puzzle. These lines have processors built across multiple generations, with each generation offering more advancements than the last.

The following are some of the Ryzen 7 processors from newer generations.

Ryzen 5000 chips were released in the last quarter of 2020. This is the 5th generation of the line, and the newest readily-available Ryzen 7 on this line is the Ryzen 7 5800X.

This CPU has 8 cores and 16 threads. You also get a base frequency of 3.8GHz. Single cores can boost up to 4.7GHz, but due to throttling, all 8 cores can only achieve a turbo boost speed of 4.4GHz.

The CPU does support overclocking though, so you can raise the clock speed even more, but will need a beefier power supply and more effective cooling to keep things stable.

This unit is from the older Ryzen 3000 series. Just like 5th gen unit, it has 8 cores and 16 threads. The CPU has a base of 3.9GHz and all cores can overclock to 4.2GHz. Single cores can reach 4.5GHz though.

What is the Intel Core i7 Processor

Core i7s have been the de-facto standard for high-performance PCs since their release in November of 2008. Newer generations have only kept this trend, and the chip can still be found on many mid to high-end consumer PCs meant for heavy workloads.

They offer good performance, and some are unlocked, meaning you get to improve their clock speeds through overclocking.

Intel is gearing up for the release of their 11th gen chips around March 2021. But before then, the 10th gen processors are still here, offering good performance and a lot of value for money.

Here alone, there are several CPU models, each one built for different applications, either on desktop or laptops, and each with varying performance parameters. Also, you can get anywhere from 4-core units to 8-core chips.

The 10700K is one of the best 10th gen core i7 chips available. It comes with 8 cores and supports Hyperthreading, resulting in up to 16 processing threads.

You also get a high base clock of 3.8GHz and turbo speeds of up to 5.1GHz and 4.9GHz for single-core and all cores respectively.

The chip is unlocked for overclocking too and is based on the 14nm process, riding on Intel’s Comet Lake architecture.

The Ryzen 7 5800X is a good candidate to test what is AMD equivalent to Core i7.

Unlike the Intel Core i7-10700K, however, Ryzen 7 5800X doesn’t have inbuilt graphics (Only the “G” Ryzen processors have built in graphics). It also runs on 8 cores and both support overclocking to boost overall CPU performance.

The best way to compare any two processors is to look at the benchmark performance score. Here we look at the Passmark and the Cinebench benchmark results for Ryzen 7 and Intel Core 7 processors.

All the numbers add up to some good real-world performance from both processors. Single-core performance tests based on Cinebench R20 place the Ryzen 5800X at the lead with a score of 628. The 10700KF follows behind with 524 points.

While from the benchmark results above the AMD Ryzen 7 5800X may obviously seem like the winner compared to the 10th Intel Core i7-10700K processors, this is not entirely a fair comparison.

A fair comparison for AMD Ryzen 7 5800X would be drawn against the newer 11th Gen Intel Core i7 processors soon to be released.

Which One is Better?

This comparison doesn’t accurately indicate which CPU line is better than the other. It does, however, clearly show what is AMD equivalent to Intel Core i7 as you have seen they have a very narrow performance differences in a similar generation.

At the same time, multi-core performance is a good metric for users who do a lot of thread-intensive tasks on their computers. With higher multicore performance, you will get better results on tasks such as encoding, video editing, and rendering etc.

And generally, having more cores and threads ensures you get good performance when running multiple tasks on your computer. They allow seamless multitasking and faster instruction execution.

Deciding will be easier now that you know what is AMD equivalent to Intel Core I7.

Just like the Core i7s, Ryzen 7s offers great performance for users who need high-performance setups for both work and play.

Each line has multiple generations of CPUs, and each generation has multiple CPU models. Therefore, settling on one usually comes down to user preference, as well as the components the user has, especially the motherboard.

With newer generations on the horizon, only time can tell which is better.