Graphic design is widely used in the art and advertisement industry in fields such as branding and designing logos.

Graphic design software advance every year and so does the required specs to run these programs. Hence, what is the best RAM for Graphic design?

This question has a non-biased answer. This is because there is no RAM made solely for graphic design. According to the complexity of your projects and your level of expertise, the best RAM for graphic design will vary.

The following are some of the most recommended and popular RAM sticks for all sorts of PC build including Graphic Design builds:

The RAM chips are all DDR4 which have a faster transfer rate, higher chip density, and also are more power-efficient.

Besides the SODIMM Kingston laptop RAM, the other RAM also meets the recommended 3000MHZ clock speed which enables data to be accessed faster by the computer.

Hence what is unique about each chipset?

This RAM meets the recommended requirements for the job making it one of the best RAM for Graphic Design.

Firstly, the RAM has a latency of C15 which is a bargain at this price range. This means there will be less delay when accessing data hence making the RAM fast and suitable for graphic design.

The RAM chip is 34MM which will ensure it fits in small factor motherboards.

The RAM also has Vengeance LPX aluminum heat spreaders that enhance heat dissipation providing more headroom for overclocking. This will keep the system stable during overclocking and improve overall performance.

The lack of any RGB lights is the only downside of this RAM. Although if you are more interested in the performance then this is still a good choice.

If you are working on a tight budget then this is one of the best RAM for graphic design.

This RAM has no RGB lighting which is mainly what makes it affordable but compensates with a sleek silver finishing.

The RAM meets the recommended 3000MHZ clock speed which enables more data to be stored in less time hence improving the performance.

The RAM also has an aluminum heat spreader to release heat creating more room for efficient overclocking which improves performance.

The RAM also has a low latency of 16. This is a bargain at this price range and will ensure reduced delay when accessing data hence making the RAM faster.

This is the most expensive RAM on the list and its specs make it one of the best RAM for graphic design.

The RAM has a high 32GB(2×8) which is double the recommended capacity. This will allow you to work on complex projects and open multiple windows simultaneously at peak performance since it stores a large amount of data.

The RAM also has a very fast 3733MHZ clock speed which is also the highest on the list. This will allow data to be stored and accessed faster hence improving the performance.

The RAM also has RGB lighting which illuminates your station when working giving a good visual appeal.

The RAM also has a heat spreader that dissipates heat creating more room for overclocking which improves performance.

The downside of this RAM is the high C19 latency. Although this is compensated by the high capacity and fast clock speed mentioned above.

The RAM combines appearance and performance making it one of the best RAM for graphic design.

The RAM has an aluminum heat spreader to improve thermal conductivity which enhances cooling hence giving more headroom for overlocking to improve performance.

The RAM also has a higher 32GB(2×16) which is higher than the recommended. This provides more storage for short term data storage allowing you to work on complex projects with ease.

The RAM also has dynamic multi-zone RGB lighting that lights up your system when working.

The RAM also has the corsair ICUE software which controls lighting and gives you the real-time frequency and temperature readings.

If you are working on a laptop, this is one of the best RAM for graphic design.

SODIMM RAMs are generally slower than DIMM RAMs and this is no exception. Although it will still do a decent job.

The RAM has a low clock speed of 2933MHz which is the lowest on the list. While this might still work, it will not be as fast as the RAMs with speeds of 3000MHz and above on the list.

The RAM also has a high latency of 17 which means there is slightly more delay when accessing data hence making it quite slow.

The advantage of this RAM is its low voltage which is at 1.2V hence consumes less battery power offering more screen time when using graphic design software.

Here is a guide on how to choose the best RAM for graphic design: 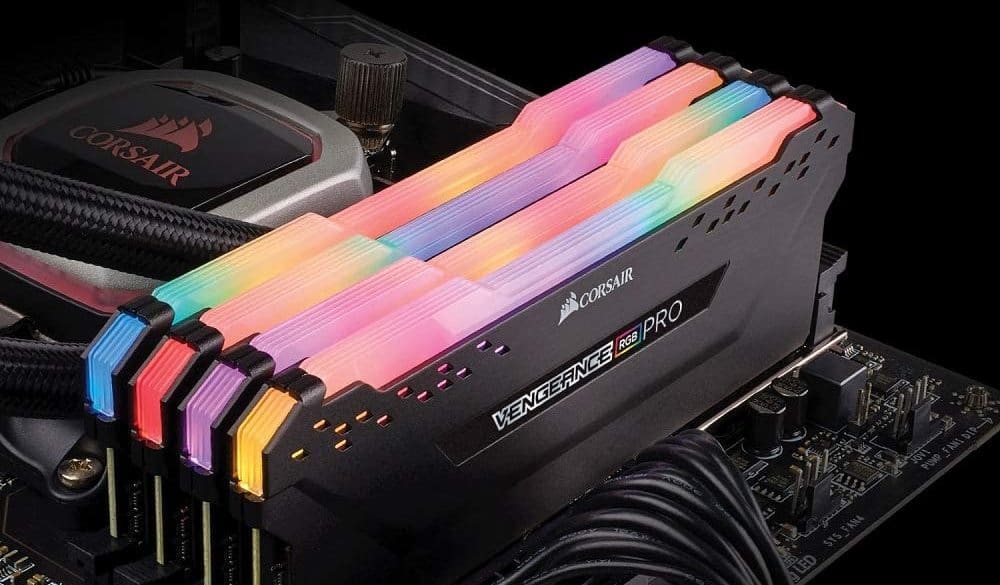 RAM capacity dictates how well a RAM will carry out its primary function which is storing data on a short-term basis.

When RAM capacity is used up the computer starts storing data in the primary storage which is slower compared to the RAM.

Since we expect multiple programs to run at the same time, we should have sufficient capacity in our RAM so that the computer does not turn to the hard disk for temporary data storage.

One of the most common graphical software is Adobe illustrator. On the system specifications required to run the software, the minimum required capacity is 8GB while the recommended is 16GB. So why is 16GB recommended?

A larger RAM capacity enables you to run more processes at the same time. While the minimum capacity(8GbB) may work, this does not give you the freedom to run multiple programs with the ease given by the 16GB RAM.

When working on graphic design it is expected to have multiple tabs open This can be the graphical software or internet program for research. To cater to the multiple programs running it is recommended to get the 16GB RAM chip.

This is the number of times data is accessed in a second. Hence 3000MHZ means data is being accessed 3 billion times a second.

RAM performs better when more data is being accessed in less time. This is why 3000MHz is the recommended RAM speed for graphic design.

This will allow more data to be stored and retrieved in the RAM in less time hence making the computer faster. Although depending on the complexity of your projects, you might need to get faster RAM but for the casual user, 3000MHz is fast enough.

RAM latency is the number of cycles it takes to access data. This means that the lower latency timings faster the RAM works.

The first number is the CAS latency which is the number of cycles it takes to read the first bit of memory from the DRAM.

The next number (17) is the tRCD which is the minimum required clock cycles between opening a memory row and accessing columns within.

The next number (17) is the tRP which is the required clock cycles between opening the next row and issuing a precharge command.

The last number (35) is the tRAS which is the required number of cycles between issuing the precharge command and row active command.

Understanding the latency timings and clock speed of your computer is essential for overclocking. In theory, overlocking is reducing the timings whilst increasing the frequency while maintaining RAM stability to improve performance.

DDR4 is the latest one and the recommended for graphical design. DDR4 is recommended because of;

Higher chip density- DDR4 RAM chips have a higher chip density (4GB to 16GB) which allows the user to have more RAM capacity with fewer chips. This is an improvement from DDR3 which had a RAM density of between 512MB and 8GB.

It is also recommended to set up the DDR4 RAM in a multi-channel setup since this will allow the RAM to run at the same capacity but multiple the bandwidth based on the number of channels you use.