When it comes to fields such as modeling, graphical design, and also professional photography you will often hear about Photoshop. It can be used for any kind of picture manipulation that you can imagine.

However, to use an industrial grade software, you need to have the right hardware. One of the most crucial aspect, along with processor, is the RAM. So, what is the best RAM for Photoshop?

There isn’t a dedicated RAM for Photoshop. However, to choose a higher performance option you will need for certain characteristics. Characteristics like a fast clock speed, a low latency, a large RAM capacity, and also high-quality heat spreaders for overclocking.

All the RAM have 3200 MHZ to ensure faster performance when using Photoshop and also meet the recommended 16GB RAM to run the Photoshop programs with no decrease in performance even when working on other programs.

The RAMs are also the latest DDR4 stick type that offers a faster data rate(25600mb/s), better power optimization, and come with faster clock speed which will enhance Photoshop performance. Even though they seem similar, all the RAMs have their unique features.

This RAM is designed for high performance overclocking which makes it one of the best RAM for Photoshop.

The RAM has a heat spreader made of pure aluminum which pulls heat away from the Integrated Circuits into the cooling path enabling quality overclocking which will improve performance by improving clock speed and reduce latency timings.

The RAM although does not have RGB lights which is what makes it slightly cheaper but it is compensated by the sleek black or red design.

The RAM features a 34mm height. This will be important for users with small form factor builds which will allow the RAM to fit without interfering with other motherboard parts.

This is the most expensive RAM of the bunch and its capacity and appearance make it the best RAM for Photoshop.

The RAM has a capacity of 32GB(2×16) which is twice higher than the others and offers high performance when using Photoshop software.

The RAM also has dynamic multizone RGB lighting which improves the visuals of your desktop when working on Photoshop or other programs.

The RAM also has memory timings of 15-15-15-35 which means it has a latency of C15 which is lower than the others which have memory timings of 16-18-18-38 meaning the delay taken to access data is lower hence the performance is higher with this RAM.

The RAM also has the lowest SPD voltage of 1.2V meaning it is more energy-efficient and is more friendly on battery life when using Photoshop software.

This RAM is made to be a mix of high-performance overclocking and good RGB lighting features at a lower price making it one of the best RAM for Photoshop.

The RAM has aluminum heat spreaders with a fin design to allow better heat dissipation and aid overclocking which will improve general performance when using Photoshop.

The RAM also has dynamic multizone RGB lighting which improves the visuals of your desktop when using it.

This RAM is specially made for budget-conscious users who equally want fast performance when using Photoshop.

The RAM is a simple gray and has no RGB lighting, unlike the more expensive RAMs which is one of the reasons why it is cheaper.

Although cheaper, the RAM still has a 0.8mm heat spreader made by punch press which enhances heat dissipation and gives room for overclocking which will improve performance when using Photoshop.

Unlike the other RAMs, this one is a SODIMM type of RAM. This RAM is specially made for those who intend to use Photoshop on laptops.

The RAM is first of all made cheaper due to its simple design which has no flashy RGB lights or sleek finish like the Vulcan or the Corsair Vengeance LPX.

The RAM also has a slightly higher latency of CL22 which is the highest meaning there will be more delay when accessing data. This makes it slightly slower than the other RAMs.

While this RAM may seem a bad alternative, it comes with a lower SPD voltage of 1.2V which is more energy-efficient as compared to the other 1.35V rated RAMs.

How Much RAM Do You Need for Photoshop?

There is a lot to consider when choosing the best RAM for Photoshop. Besides the RAM capacity which is normally the X factor when choosing RAM, aspects such as the latency, clock frequency, channel setup, and type of RAM stick are equally important.

As per the official requirements, the minimum required RAM is 8 GB and recommended is 16GB.

However, depending upon the size and complexity of your projects, you may need to go with more.

How to Choose the Best RAM for Photoshop?

When choosing the best RAM for Photoshop there are some factors to consider such as:

The most important aspect of RAM is its capacity. This is the amount of storage available to store and access data on a short-term basis and is measured in gigabytes.

RAM capacity will vary with different software such as:

The minimum requirement to run Adobe Photoshop is 8GB although the recommended is 16GB.

The minimum requirement to run Adobe Lightroom is 8 GB whereas the recommended is 16 GB.

There are a minimum and a recommended RAM capacity needed to run Photoshop software.

The recommended RAM is the amount needed to run the program at optimum performance. While the Photoshop software can still run using the minimum requirements, this does not consider the background process. Hence the performance will be slower compared to running on the recommended capacity.

This is why the recommended requirement for Photoshop is 16gigabytes. This will not only allow your computer to perform at peak performance when using Photoshop but also allow you to simultaneously run other programs without downgrading the performance.

The RAM stick types include; DDR1, DDR2, DDR3, and DDR4 with each being faster than the previous one. DDR is Double Data Rate while the number refers to the generation.

The best RAM for Photoshop has to be a DDR4 RAM stick. The advantages of DDR4 RAM mainly lie in performance, energy efficiency, and chip density.

First of all, DDR4 RAM performs faster and has a better bandwidth. The previous DDR3 RAM had data rates of about 800 to 2133MT/s while the DDR4 has data rates of 2133MT/s up to 4266MT/s. This improvement in data rate allows the RAM to fetch data from the drive faster hence improving the performance while using Photoshop programs.

DDR4 is also more energy-efficient. The DDR4 has a reduced memory power demand of up to 1.2V which is less than the previous 1.5V which was in most DDR3 RAMs. This means there is less power consumption hence longer battery life allowing longer hours of working especially when using a laptop.

DDR4 chips also come with a higher chip density compared to previous versions. Unlike most DDR3 RAMs which had chip density of about 512MB to 8GB, DDR4 RAM allows chip density of 4GB up to even16 GB and more which allow you to install more RAM and boost the performance while using Photoshop.

The only downfall of DDR4 may be the compatibility. DDR3 based motherboards are not compatible with DDR4 RAM sticks. Hence it is important to check for your RAM type before upgrading to the DDR4. 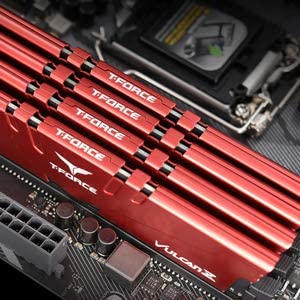 The arrangement of RAM on your motherboard can either be in single-channel or multi-channel.

Hence the best RAM for Photoshop should utilize a multi-channel setup since it will increase bandwidth hence boosting performance. It is also cheaper and provides future proof in case one RAM malfunctions.

The RAM frequency is the number of times the RAM accesses data in a single cycle. It is measured in megahertz which means that a RAM with 2600MHZ performs 2.6billion cycles in a second.

Since there are many resources in Photoshop, a high clock speed is required. If we were to use the Adobe Photoshop software, the recommended is 3200MHZ of DDR4 RAM which is what you should aim for. This will allow faster loading of your software and also faster editing and building.

This is the number of clock cycles it takes RAM to access data. Hence the lesser the latency the better.

Different computers have different RAM timings such as CL 16-18-18-36. The numbers denote CAS, RAS to CAS delay, RAS percentage, and tRAS respectively. These numbers are the delay it takes before the RAM accesses data and understanding them is crucial for overclocking your RAM.

The point of overclocking is to get a balance between a lower latency and a higher clock speed hence when looking for the best RAM for Photoshop it is essential to look for the lowest latency timings since the lower the CAS timings the lesser the required clock cycles it takes RAM to access data.

Overclocking capability will also depend on the heat spreaders in the RAM which aid in heat dissipation. The best RAM for Photoshop should have larger heatsinks which will enhance heat dissipation hence improving the quality of overclocking.