With the advancements in processors, it is always a tough decision trying to decide which is the best processor on the market.

Despite being a hard choice, when talking about the best sixteen core processors, the Ryzen 9 3950x will pop up. This is a high-end processor used for extreme tasks such as high-quality game streaming or rendering high-quality graphics. So, which is the best RAM for Ryzen 9 3950x?

The only way to get the best out of a high-end processor is to pair it with a high-end RAM. The RAM will require certain aspects such as low latency, high frequency, high capacity, and also be good at overclocking.

The following are some of the highest quality and highest performing RAM sticks in the market suitable for a powerhouse that is Ryzen 9 3950x.

The RAMs are all DDR4 which are power efficient, faster, and have higher chip densities compared to previous modules.

The RAMs all meet the recommended 16GB capacity which is recommended to provide sufficient storage for temporary files.

The RAMs are also set up in a multichannel setup which will multiple the channel depending on the number of channels used.

The RAMs also meet the recommended 3200MHz which provides sufficient speed for copying and accessing data in the RAM with less time.

Hence what makes these RAMs the best for Ryzen 9 3950x?

This RAM’s high capacity combined with a high-quality cooling system makes it one of the best RAM for Ryzen 9 3950x.

The RAM has a high capacity of 32GB(4×8) which enables sufficient storage of temporary data. The RAM is also set up in a quad-channel setup which quadruples the bandwidth hence improving performance.

The RAM also has a Patented DHX cooling system attached to the heat spreader which cools the RAM. This is important since when the heat is cleared, there is more room for overclocking.

The RAM runs at 3200MHz which meets the minimum requirement. This will allow the RAM to store and retrieve temporary data faster hence improved performance.

The RAM also has ICUE software for dynamic light control and displays real-time frequency and temperature of the RAM.

This is a high capacity and high-frequency RAM making it one of the best for Ryzen 9 3950x.

The RAM has a high 32GB(2×16) which meets the recommended capacity. This will provide sufficient storage for temporary files during processing.

The RAM also has a high frequency of 3733MHZ which will allow more data to be accessed in less time hence improving RAM speed.

The RAM also has customizable RGB lighting to illuminate your system while working.

The RAM also operates at a low voltage of 1.2V which consumes less battery which enables more screen time.

This is a high-performance RAM at a bargain making it one of the best RAM for Ryzen 9 3950x.

The RAM has a high clock speed of 4400MHz which is very fast for this price range. This speed is sufficient to allow more data to be stored in the RAM in less time hence making the RAM faster.

The RAM also has a latency of 15. This means there will be less delay when accessing data by the RAM hence faster performance.

The RAM also has an aluminum heatshield which dissipates heat creating more headroom for overclocking to improves RAM performance.

The RAM lacks any RGB lighting although it compensates with a silver finish which is still appealing and can match with your motherboard.

This is the best RAM for Ryzen 9 3950x for the budget cautious people.

The RAM has the lowest frequency of 3200MHZ which still meets the minimum required to run with Ryzen 9 3950x. This will enable data to be stored and retrieved in less time hence improve performance.

The RAM also has the lowest capacity of 16GB(2×8) which also meets the minimum recommended to run with Ryzen 9 3950x. This allows sufficient storage for temporary files hence the computer does not have to save files in the slow hard disk.

Besides being the cheapest on the list, the RAM still has RGB lights that illuminate your system when working.

The RAM also operates at 1.2V which is battery friendly and will ensure more screen time when working.

The RAM also has an aluminum heat spreader to improve thermal conductivity hence creating a cool environment for RAM overclocking.

This is the fastest RAM on the list which makes it the best RAM for Ryzen 9 3950x.

What makes this RAM the fastest and most expensive is the 5100MHz frequency. This speed allows data to be stored and accessed at a very fast rate which is the main task of RAM.

The RAM also has high quality extruded aluminum heat spreader for maximum heat dissipation which will maintain a cool environment for efficient overclocking which improves performance for enthusiasts or heavy users.

The main disadvantage of this RAM is the high C19 latency which means there will be more delay before data is accessed. Although this is compensated by the very fast 5100MHz speed.

The RAM also does not have RGB lights hence will not illuminate your system when working. 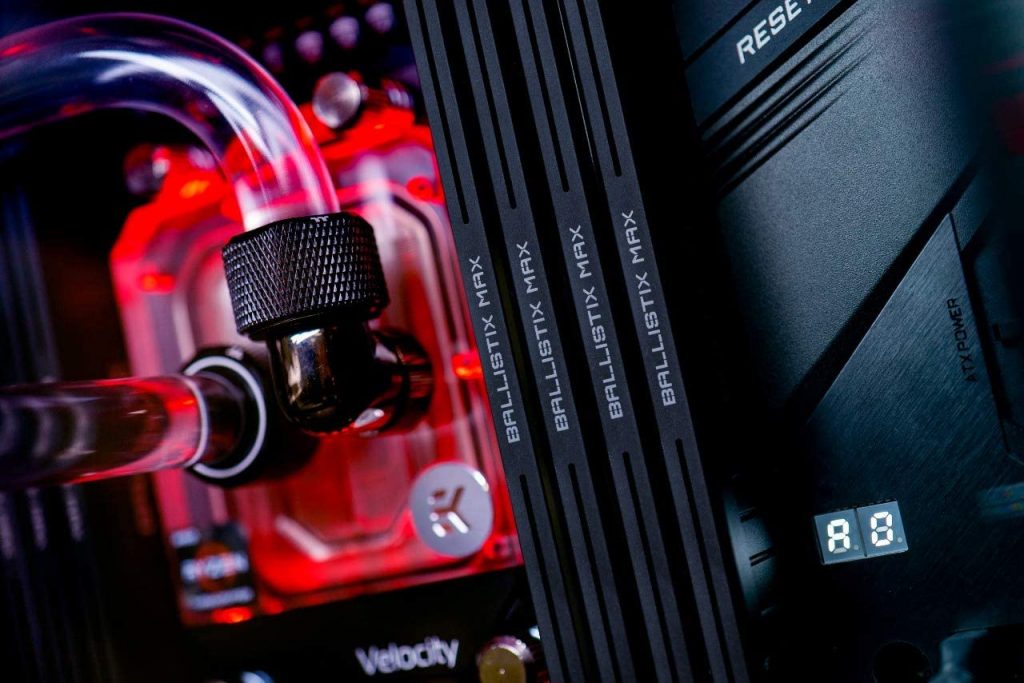 RAM capacity is the storage where short term files are stored.

We need a large capacity since when memory runs out the computer starts storing data in the larger but slower primary storage instead of the RAM.

The Ryzen 9 3950x is a high-performance processor hence we need at least 16GB of RAM to maximize the sixteen-core processor.

This will enable the computer to store more data to the RAM which is faster hence accessing it is also faster.

Although the required RAM capacity will also vary depending on what you are doing on your computer. For more complex tasks you may be inclined to go for a larger 32GB RAM capacity to allow you to run more programs or complex programs simultaneously with ease.

Latency is the number of cycles it takes to access data.

RAM latency is split into timings. An example is 15-15-15-36. These numbers indicate delays it takes to store data and are all different as follows:

These timings are essential in overclocking since reducing the values and increasing the frequency overclocks your RAM thus improving performance.

Overclocking emits a lot of heat hence a larger heat sink is essential for efficient overclocking. This is because it will emit maximum heat hence leaving a cool environment which is important for RAM stability when overclocking.

This is the number of cycles the RAM makes in a second.

More cycles in a second mean more data is accessed in less time. This is why it is recommended to have at least a 3200MHz RAM to go with the Ryzen 9 3950.

The speed in a 3200MHz RAM is essential for heavy tasks such as gaming and video rendering which are the kind of tasks that the Ryzen 9 3950x processor is used for.

This speed will ensure more data cycles in a second hence faster performance when working. Although the complexity of tasks increases, you may have to upgrade to a 4000MHZ or even 5000MHZ RAM to allow the complex programs to run with ease. Although, a 3200MHZ should work just fine for the casual user.

DDR4 is recommended for Ryzen 9 3950x because of several reasons.

Firstly, they have faster data transfer rates which ensures read and write instructions are executed faster. The rates range from 2133MT/s to 4266MT/s which is an improvement from the previous DDR3 which had transfer rates between 800 to 2133MT/s.

Secondly, DDR4 is more power efficient which means they consume less battery hence allowing more screen time. DDR4 RAMs have an SPD voltage of as low as 1.05V which is an improvement from the previous DDR3 which had a minimum SPD of 1.5V.

It is also recommended to set up the RAMs in a multi-core setup This will multiply the bandwidth depending on the number of channels you use. Higher bandwidth means a higher data transfer rate which in turn improve RAM performance