Virtual reality is made to create an interactive environment between the user and the computer. The complex process of angling two 2D images to mimic how we view the real world is not a simple task.

VR can be used in a variety of fields such as military, sport, and education. Although the most common use of VR is gaming. Gaming with VR creates a close to reality experience which is what every gaming enthusiast yearns for.

Finding the right RAM or VR is an open-minded question. There isn’t a particular RAM made solely for VR. There are only recommendations. This article will shed light on how to get the best RAM for VR.

The following are highly recommended RAM sticks for VR in particular and for enthusiasts in general.

The RAM chips are all the latest DDR4 type which are more power-efficient, have higher chip density, and offer a faster data rate.

All the RAM also meets the required 16GB RAM capacity which is the required storage for VR. This will provide sufficient storage and allow you to game perfectly with VR.

The RAM chips also meet the recommended 3000MHZ which is the recommended clock speed. This will allow more data to be accessed in a second hence improving performance while gaming with VR.

Hence what makes these RAM chips all unique?

This RAM is recommended because of its good performance and affordability making it one of the best RAM for VR.

The RAM has a clock speed of 3000MHZ which is recommended for VR. This enables files to be accessed faster hence improving the performance when using VR.

The RAM also has a latency of 15 which is a huge bargain at this price. This will decrease the cycles needed to access data hence making the RAM perform faster.

The RAM also has an aluminum heat spreader which blows away heat keeping the RAM cool hence providing more space for overclocking which improves RAM performance.

The RAM’s height is 34MM which is important for users with small factor motherboards.

The only problem with this module is the lack of RGB lights which would illuminate your system while working.

This RAM’s high frequency and capacity make it one of the best RAM for VR.

The RAM has a large 32GB capacity. The large capacity allows more data to be stored on a short-term basis hence preventing the processor from saving data from the primary storage which is slower.

The RAM has a high 3733 frequency which allows more data to be accessed in a second hence improving the performance when using VR.

The RAM also has customizable RGB lights which illuminate your system when working.

The disadvantage of the RAM is the high C19 latency which means it will take more cycles to access data. Although that is compensated with the high frequency and capacity.

This RAM has RGB lights and a high capacity for enthusiasts making it among the best RAM for VR.

The RAM has RGB lights to illuminate your system with animated lighting to provide a good experience when working.

The RAM also has a high 32GB capacity which allows large files to be stored with ease hence data does not have to be accessed from the slow primary storage.

The RAM also has an in-built heat spreader which enhances cooling in the RAM to provide quality overclocking which increases RAM’s performance.

The RAM also has a 3200MHZ clock speed which meets the recommended speed. This will allow more data to be accessed in less time hence improving RAM performance.

This is a high-speed low latency RAM which is what makes it one of the best RAM for VR.

The RAM has a clock speed of 3600MHZ which is among the highest on the list. This allows more data to be accessed in less time thus improving RAM performance.

The RAM has a low C14 latency which means the RAM requires fewer cycles to access data. This means more data is accessed with less time hence faster performance.

The RAM also features an aluminum alloy heat sink which dissipates heat creating more headroom for overclocking which improves the performance of the RAM when using VR.

This RAM is made to combine efficient overclocking, capacity, and RGB lights making it the best RAM for VR.

The RAM has a high 32GB(4×8) capacity which enables more files to be stored hence the computer does not run out of memory and store files in the primary storage.

The RAM also used a quad channel setup(4×8) which quadruples the bandwidth and increasing the data transfer rate. This enables more data to be accessed in less time and improve RAM performance.

The RAM features a Patented DHX cooling system which aims to keep the RAM cool to ensure efficient RAM overclocking which improves performance.

The RAM also has RGB lights which illuminate your system when working. This works hand in hand with ICUE software that provides light control and gives you real time temperature and frequency readings.

Guide to Finding the Right RAM for VR

Here is how to find best RAM for VR. 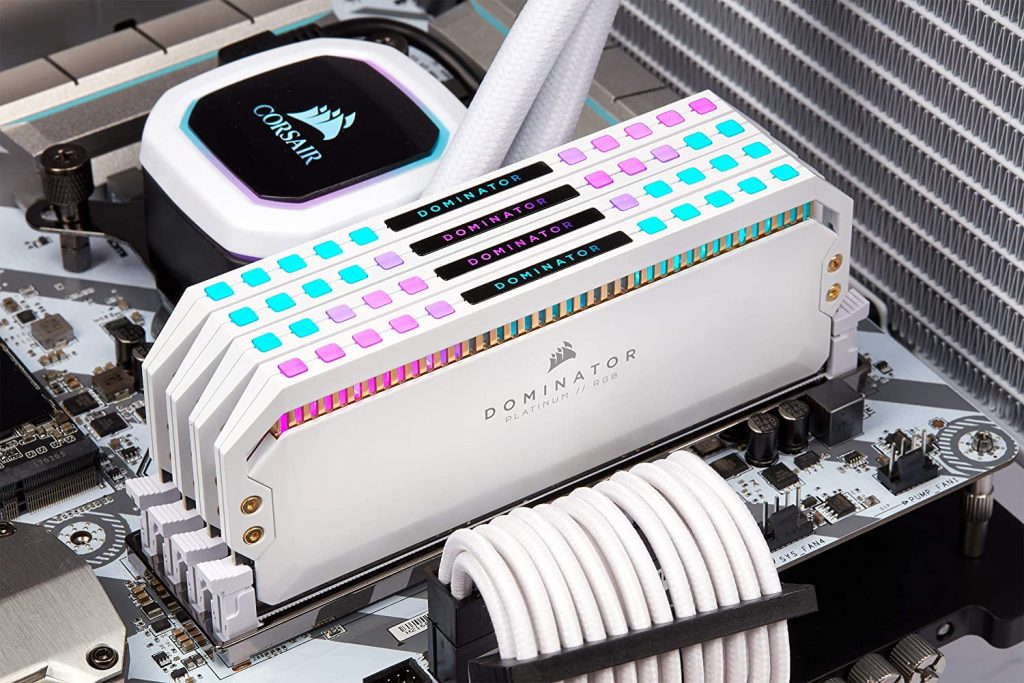 Nevertheless, if you want to use the latest headsets, the minimum capacity is 8GB whereas the recommended is 16GB.

The recommended RAM is not only for VR. As a gamer, it is pivotal to choose a RAM sufficient for gaming and also VR.

When RAM is used up the computer starts using the primary storage. Hence to prevent this, it is recommended to use a 16GB capacity RAM or more.

The RAM clock speed determines the amount of data accessed in a second. Thus, we need a fast clock speed if we are to get the best performance when using VR headsets.

Just like the capacity, it is important to choose a clock speed that can cater to both using VR and gaming. This is why 3000MHZ is the recommended speed. So why 3000 you may ask.

A VR headset is constantly trying to create a close to a real environment for the user. While this consumes resources, there is also a game or movie running which also depends on the RAM. This is why a 3000MHZ clock speed or more is required.

This speed will allow more data to be accessed at once hence allowing multiple programs to work together with ease.

This is the delay the RAM takes to access data. Since we need files to be accessed in fewer cycles, it is essential to have the least latency.

The most common is the CAS latency which is the number of cycles it takes to read the first bit of memory. This is normally found in the RAM description as a number preceded with a C. In this case, the CAS latency is C15.

Overclocking capability is also determined by the nature of the heat spreaders or heat sinks. A larger heat sink will allow more heat to be released which consequentially gives more space for overclocking.

DDR4 is the latest and the recommended for VR because;

Larger chip density – DDR4 can have a larger capacity. Unlike DDR3 modules which had a RAM capacity of 512MB to 8Gb, DDR4 have chip densities of 4GB up to even 16GB on a single module. This enables you to have more RAM capacity with fewer RAM chips.

Power efficiency – DDR4 RAM runs on as low as 1.05V which is an improvement from the previous DDR3 which mostly operated on 1.5V and DDR2 on 1.8V. This decrease in required voltage is friendly to battery life and allows the computer to have more screen time when gaming with VR.

It is also essential to set up the RAM in a multichannel setup. This is because multiple channels offer the same RAM capacity but with double, triple, or quadruple bandwidth based on the number of channels used.