When building a PC, the chipset is one of the most crucial parts since it determines the compatibility of the kits being used during customization.

AMD x570 is one of the most powerful chipsets. It is designed to allow flexible and innovative customization for gamers. When building an x570 based PC you may wonder what is the best RAM for x570.

This chipset is made for high-end AMD motherboards which are made for intensive tasks such as high-quality gaming and content creation. Hence to get the best out of this powerful chipset we will require an equally powerful RAM.

The following high performance RAM are excellent for the X570 Chipset.

The RAMs all meet the recommended 16Gb which is sufficient space for storage of short-term data by the computer.

The RAMs are also the recommended DDR4 because of faster performance, larger RAM densities, and power efficiency.

The RAMs are also set up in a multi-channel setup which aims to improve performance by increasing the bandwidth based on the number of channels.

Hence, what makes these RAMs the best for X570.

This RAM meets the required specifications at a good value making it the recommended and also one of the best RAM for X570.

The RAM has a 3000MHz RAM speed. This is sufficient to allow the computer to access data from the RAM in less time hence improving the performance.

The RAM also has a low profile 34MM height which is important for users with small factor builds.

The Ram also has low C15 latency. This will ensure there is less delay in accessing data from the RAM hence improving the performance.

The downside of this RAM is the lack of RGB lights. Although the RAM comes in multiple colors that can still match your chipset hence improving the visual appeal.

The RAM has a good design and a high capacity making it one of the best RAM for X570.

The RAM has a large 32Gb(16×2) capacity. The large capacity will allow more short-term data to be stored in the RAM which means the RAM will also handle running multiple programs better.

The RAM’s 3200MHz speed will also ensure more data is stored and accessed from the RAM in less time hence improving the RAM’s performance.

The RAM has RGB lights that illuminate the desktop during working. This is backed by Corsair’s ICUE software which customizes lighting profiles with different patterns and colors.

The RAM has a built-in aluminum heat spreader which dissipates heat leaving more headroom for overclocking which improves RAM performance.

This RAM is the most expensive RAM on the list but the specifications make it one of the best RAM for X570.

The RAM has a high 32GB(2×16) which is double the recommended and the highest on the list. The large capacity will allow more storage of short-term data into the RAM which will consequently enable you to run more programs simultaneously with ease.

The RAM also has a high 3733MHz speed. This speed will enable the computer to access more data from the RAM in less time hence improving the performance.

The RAM also has a heat spreader which dissipates heat leaving behind more headroom for overclocking which improves the performance.

The RAM also has RGB lights which illuminate your computer giving a better visual experience when working.

The disadvantage of this RAM is the C19 latency. This means that there will be more delay in accessing data. Although with the large capacity and fast frequency, the RAM remains a good choice for the X570 chipset.

This RAM offers high performance at a reasonable price making it one of the best RAM for X570.

The RAM has a low C15 latency which will ensure data is accessed in fewer cycles hence improving the RAM’s performance.

The RAM also has a high 4133MHz Ram speed which is the highest and a big bargain for its price. The high frequency will ensure data is copied to the RAM and accessed in less time hence improving the RAM’s performance.

The RAM also has an aluminum heatshield which aims to release heat from the RAM keeping the RAM cool and making overclocking easier and more efficient thus improving RAM performance.

The disadvantage of this RAM would be the lack of RGB lighting. Although the RAM has stylishly designed heat spreaders which improve the RAM’s visual appeal.

This is the best RAM for X570 for the budget cautious users.

Despite being the cheapest, the RAM still has 3000MHz RAM speed. This RAM speed will enable more data to be stored in the RAM with less time hence improving performance.

The RAM also has a heats spreader which dissipates heat leaving more headroom for efficient overclocking which improves RAM performance.

The downside of this RAM is the design. The RAM does not have any RGB lights to illuminate your CPU when working which is mainly what makes it cheap. Although the RAM still has a red or black finish which would match your x570 chipset. 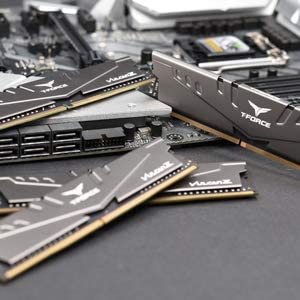 One of the most important ways to get the best out of your RAM is setting it up in a multi-channel setup. This is because a multichannel setup will offer the same capacity as a single channel setup but will offer more bandwidth based on the number of channels.

This means that you should opt for two 8GB RAM sticks instead of a single 16GB RAM stick to double the bandwidth and improve the performance.

The RAM capacity is the storage available to store short term data by the computer. The larger the capacity, the more the data that can be stored, and the more the programs that can be run simultaneously.

This chipset is made for heavy tasks hence we should consider a Ram capacity that can handle the intensive tasks. This is why 16GB is the recommended capacity for this chipset.

16GB will offer enough space for short-term data storage and enable the PC to run multiple programs with ease which is what we want out of the X570 chipset.

RAM frequency determines the amount of data that will be accessed in a second. Hence 3000MHz means data is accessed 3billion times a second.

The RAM frequency depends on the nature of the job at hand. For a casual gamer who isn’t too interested in frame rate, even a 3000MHz will work. Although for a professional content creator, the user may require a higher 4000 or 5000MHz RAM.

Although in the case of gaming, it is always recommended to go with a 3200MHz RAM speed which will ensure more data is stored and accessed in less time hence improving performance.

This is the number of cycles it takes the RAM to access data. A higher latency will cause more delay when accessing data hence degrading performance. Hence, in this case, less is better.

Latency is split into RAM timings which are a combination of numbers denoting different delays. An example is 16-18-18-38. The numbers refer to CL, tRCD, tRP, and tRAS respectively.

The timings can be viewed by several apps such as CPU-Z.

When checking the latency, it is also important to consider other specifications. This is because DDR4 RAMs generally have more latency than DDR3s. This does not make the DDR3 faster since DDR4 has a larger capacity and frequency.

Overclocking efficiency is also determined by the quality and size of the heatsinks. A larger heatsink dissipates more heat leaving more cool headroom for overclocking.

The best RAM for X570 should be a DDR4 because;

DDR4 is power efficient – DDR4 requires less power to run. DDR4 runs on a voltage as low as 1.05V while DDR3 had a minimum SPD of 1.5V. This decrease in required voltage enables DDR4 to consume less power which leads to improved battery life hence more screen time.