Media files have gotten larger and improved in quality over the past few years. HD files take up a lot of space and require a lot of processing power to decode and stream.

If you want to get a NAS that you will use predominantly for 4K content streaming, getting the best NAS for 4K streaming should be your goal.

You will need a beefed-up NAS with sufficient hard drive space for your files. However, because storage can be upgraded, you should consider a NAS with a good processor, RAM, and support fast networking speeds.

Generally NAS capable of 4k Streaming are more expensive than base models.

The following are popular NAS options that have the capacity to stream 4K content.

The TerraMaster F2-221 is capable of 4K UHD video transcoding in real-time and serving it to connected clients.

Furthermore, with support for streaming services like Plex and several others, this is the best NAS for 4K streaming.

It has a dual-core Intel Apollo CPU along with 2GB DDR4 RAM. These combined give this system a high performance making it an ideal candidate for streaming 4K content.

It features hardware encryption which will keep your files safe from unauthorized access. And, its small profile makes it easy to fit on your desk or other small spaces.

It has two removable drive bays that will allow you to customize storage capacities to your needs and also comes with a fan to keep things cool during operation.

It doesn’t cost a lot either, at just under $250 from some sellers, it can be a great choice for streaming on a budget. You get decent read and write speeds of 200 and 190MB/s respectively which may seem low but are enough for 4K streaming.

It has dual Gigabit Ethernet ports for faster networking along with an HDMI output and to USB ports.

This unit aims to cover most users’ storage needs as with its two drive bays; you can potentially have up to 32TB of storage space. This will be ideal if you are storing numerous 4K quality media files that will take up a lot of space.

Out of the box, you get 2GB of DDR4 RAM. This is however expandable up to 6GB depending on your needs. Furthermore, it is diskless so you’ll get the freedom to decide whether to go with an HDD or SSDs for high read and write speeds.

Once connected, you will be able to stream your files from the NAS both locally and over the internet. You can even stream content directly to your mobile phone via the DS cloud app. That makes this the best NAS for 4K streaming.

As far as networking is concerned, you get two 1GbE ports that support link aggregation which will double your bandwidth using both ports as a single logical network link.

It also supports high sequential read and write speeds of 225 and 192MB/s respectively.

You get two drive bays and RAID support for data safety.

This is a high-performance NAS that comes with 4GB of DDR3 memory. This can later be expanded to 8GB if you need the extra performance boost in terms of multitasking.

As per performance, this NAS uses a quad-core Intel Celeron processor. If you need high performance, you will benefit from the two NVME slots that are easily accessible from the bottom of the device.

These let you create caches for the HDDs which will improve performance and make 4K streaming a breeze.

It is, therefore, the best NAS for 4K streaming in regards to performance and storage space. It comes with 4 drive bays.

As it is diskless, you get to pick how much storage you want to set your device up with and you can go with up to 64GB or 144TB when using an expansion unit from Synology.

This will give you sufficient storage for thousands of minutes of 4K footage.

You get fast internet support with dual 1GbE ports for optimum data transfer as well as 225 and 221MB/s of read and write speeds.

For high-quality media streaming, you need a NAS that’s adapted to deliver high performance. This model from QNAP comes with 8GB of RAM which allows efficient multitasking. With this, users can connect and access data simultaneously with minimal downtime.

You also get a high-performance quad-core Intel Celeron processor that facilitates high-speed video transcoding for 4K media. That makes this the best NAS for 4K streaming since transfer speeds can also reach highs of 205MB/s.

There’s support for two Gigabit LAN networking ports, a feature that can come in handy for demanding streaming needs and you also can run containerized applications as well as multiple virtual Linux systems if that’s a feature you need.

You have many streaming options, from the popular DLNA which offers high compatibility with other devices, to Chromecasts, and even Bluetooth.

You also get high scalability as well as ease of use since the unit comes with a remote which will make operating it much easier. Especially if you have it set up somewhere easy to access.

If you want a reliable system then this is the best NAS for 4K streaming. It is built for optimum performance in demanding environments where it needs to be operational 24/7.

It is also very durable with extra care taken to ensure heat is efficiently dissipated, and is moderately resistant to drops

You get high speeds with link aggregation that allows up to 564 and 551MB/s read and write speeds respectively. This is further made possible by the two 2.5Gb/s ethernet ports at the back of the device.

You get 4GB RAM out of the box, but along the road, if you need extra performance, this can be upgraded up to 8GB max.

It’s Intel Celeron J4105 processor ensures you get high performance in demanding applications and with clock speeds ranging from 1.5 to 2.5 GHz, 4K video decoding and streaming can take place simultaneously.

You get four drive bays that can take up hard drives to deliver storage capacities of up to 72TB. The added three-year warranty should also give you peace of mind.

Guide to Choosing the Right NAS for 4K Streaming:

4K is a term that’s used to denote the resolution of a digital screen. It is used as a measure of the details that the screen is capable of showing.

A typical 4K screen has in the UHD (Ultra HD) format has 3840 pixels along the width of the display while the height has 2160 Pixels. It’s called 4K because of how close the number of pixels on the horizontal is to 4000.

Typically, the high resolution gives better picture quality. This means the content you consume appears richer and sharper when viewed in 4K as opposed to other resolutions. 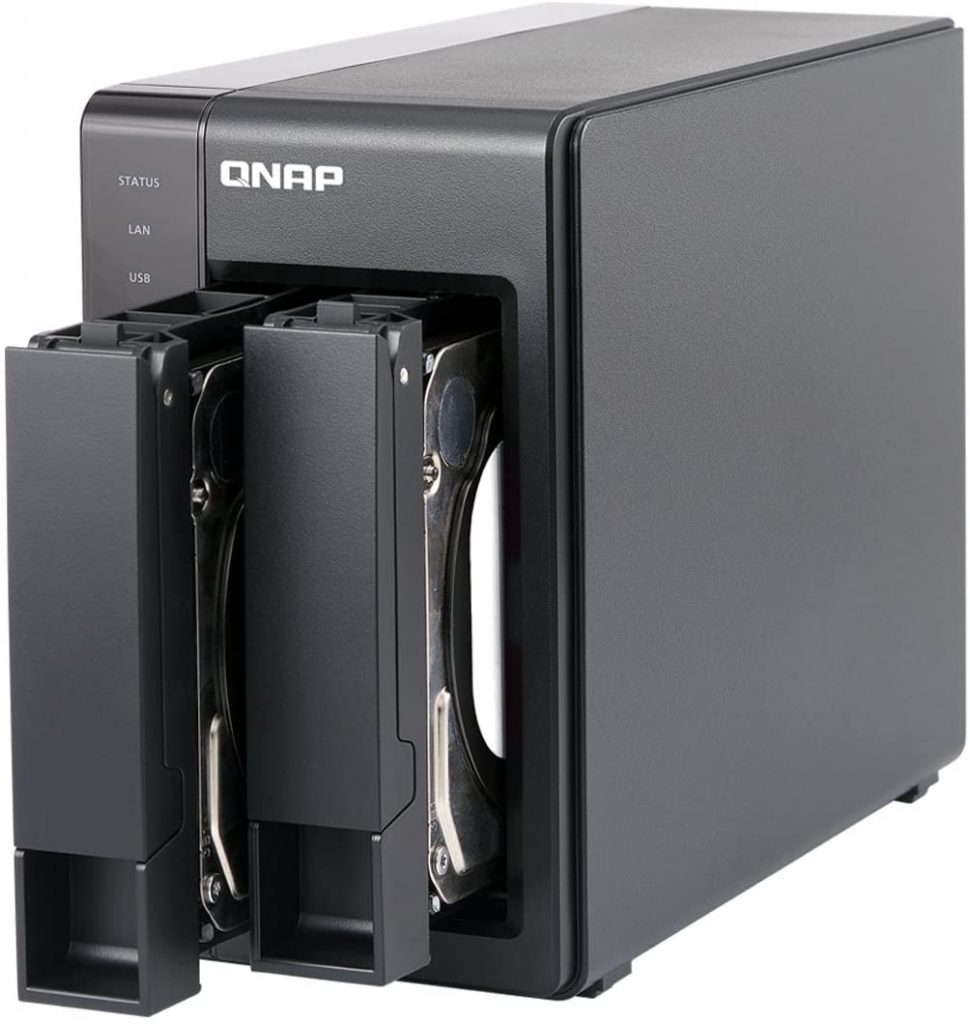 With a media server, content gets streamed from one central location, usually over a network, to connected devices. This can happen over the local network or the internet depending on your NAS and your internet capabilities.

Streaming in 4K can be a bit demanding because the file sizes are large. These can be heavy on the processor of the NAS, handling the decoding and encoding of the files to different video formats as well as scheduling its transfer over the network.

Even the networking aspect can be a bit challenging because while you may easily get away with streaming in 4K from a NAS to one or two devices, having more devices will increase the load on the system, and if it’s not robust enough, you will experience some lags.

Besides having good specs, you will also benefit if you have a NAS that supports 4K video transcoding.

With transcoding, a video is converted from its original format to one that is playable via your media devices.

This can make playing files more efficient as you get playable media straight from the NAS instead of decoding and encoding it on your device which for large files can cause lags.

One of the main reasons you may need a NAS for 4K streaming is centrality. With your files in just one central location, streaming becomes more convenient especially if you have multiple files.

NAS drives typically have large storage capacities, so you can store all the files and access them either locally or from anywhere over the internet.

You can also boost performance by installing SSDs as cache if supported by the NAS.

If you have a cozy setup at a home or in a small office space where you must streaming 4k either for entertainment or for work purposes like video editing, then you need the right NAS streaming device to hold all of media footage.

Here we reviewed some of the best NAS for 4k streaming. As a rule of thumb, NAS capable of 4K streaming are almost always more expensive than non-4K options.