Can You Plug in a SATA Drive while Computer is Running?

With regards to the SATA interface, a lot of people ask the common query: can you plug in a SATA drive while computer is running? Knowing about it can be very important if you have an always running system (such as a server) or you want to test it on your PCs.

This can be done considering the hot-plugging capability is enabled in the BIOS and the SATA controller and operating system support it. The system will detect the SATA drive right away and it would be ready to use. It’s possible for most modern drives as long as a particular drive holds data and is not a system drive.

We will provide more insight into the hot-plugging capability of the SATA interface and discuss its benefits and possible issues and risks you might encounter.

Can You Plug in a SATA Drive while Computer is Running?

The addition or removal of a component to a running computer without significantly interrupting the system’s operation is called hot plugging. You may know that the USB interface is hot-pluggable; that means USB devices can be added or removed from a computer without turning it off.

Similarly, you would like to know if the SATA interface supports hot plugging. In other words, is it possible to plug in a SATA drive even if the system is running?

The simple answer is that a SATA drive can plugin while the computer is running. You can add multiple drives to your system by enabling the hot-plugging option in BIOS. The system will detect the drives instantaneously and they would be ready to use.

Most modern drives with advances in technology are designed to support this capability. However, it should hold data and must not be the system drive.

Note that hot plugging is a feature of the SATA interface, unlike the earlier PATA standard. This capability also depends on the motherboard chipset SATA controller that supports it. Most recent versions of operating systems like Windows also support hot plugging.

How to Enable Hot Plugging in BIOS? 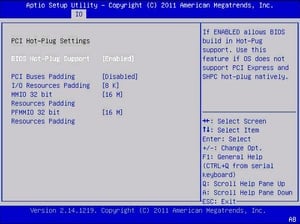 Before plugging a SATA drive into the running system, you need to make sure that the SATA ports on the motherboard are configured and enabled to support this capability.

This can be done in the BIOS and below are the steps to do it:

An example of such a computer system is a server. You can consider what would be the option if a need arises to access data that’s on another drive. That is where hot plugging comes into play and is indeed a necessary and beneficial feature.

Another application of hot plugging of SATA drives can be found in video editing where a drive can be pulled from a camera and connected to a computer without shutting it down. This allows for edits to be made that is based on the notes just about immediately.

Once the edited material is copied from the hot-pluggable drive, it can be reformatted and ready for the camera yet again.

Another application is in the always-on security systems where a surveillance SATA drive can be plugged into the system from a Digital Video Recorder (DVR) or a Network Video Recorder (NVR).

Hot plugging is also a great tool for RAID 5/6 array.

There can be various practical applications of hot plugging SATA drives and you can also use this capability in your desktop computers.

Also Read: How Many SATA Power Cables Do I Need?

The Issues and Risks of Hot Plugging SATA Drives

While it’s true that modern SATA drives do support hot-plugging and many drive manufacturers even specify this capability in the specifications of a drive, issues can arise when attempting to hot plug.

There can be electrical issues that can damage the drive as well as harm the user. For instance, if your disk has a legacy Molex connector and you power your disk through it, hot plugging can cause electrical peaks which can be very damaging.

It can even harm you seriously because of the current that’s passing through it.

That’s why it’s recommended to use the SATA power connector or cable for powering the drive. We also discourage the use of any Molex to SATA power adapter for hot plugging.

There can also be other problems such as hardware failure after hot plugging a drive. This could also result in data loss if the drive malfunctions. We reiterate that these problems can also arise if you attempt to hot plug older drives and it may result in an unexpected mishap.

By going through this article, you should get an idea concerning can you plug in a SATA drive while computer is running.

We emphasize here that you can test this capability with most modern hard drives and solid-state drives quite safely without posing risks. Also, your motherboard’s SATA controller and operating system should support this feature.

Unless you own an always running system like a server, a better option is to turn off your computer and then connect your drives.

This applies to normal users who don’t frequently change SATA drives and use their computers for work or personal use.