Does it Matter Which SATA Port I Use?

As you may know, connecting storage devices such as hard drives, solid-state drives and CD/DVD drives to a computer requires SATA ports. Therefore, people often inquire about using specific SATA ports on their motherboard. One such question is, does it matter which SATA port I use?

It depends on the motherboard model and the SATA ports it features. If you have a recent model with all the ports being SATA 3, you can use any port to connect your SATA 3 drive. Presuming you have an older board with a mix of SATA 2 and 3 ports or without SATA 3 ports, the same drive will work at a reduced speed if not connected to a port of the same version.

This way you will determine hard disk compatibility with your motherboard for working it at the interface’s potential.

Below we explore this topic in detail.

Does it Matter Which SATA Port I Use? 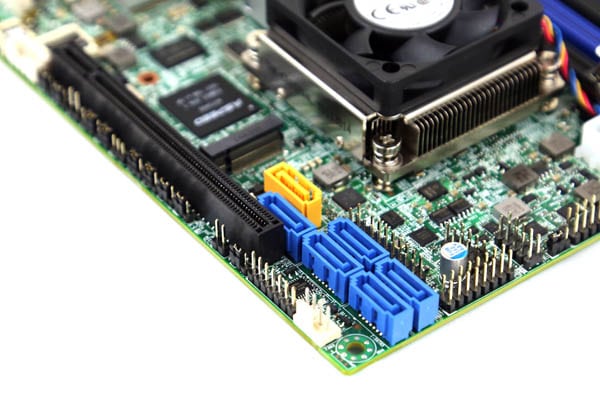 If you are building a computer or planning to upgrade your current hard disk to a SATA-based HDD or SSD, you might want to know more about which SATA port to use, and does it matter?

The short answer is both no and yes. This depends on the motherboard model you have along with the SATA ports it has.

If your motherboard has all the SATA connectors or ports that are based on SATA 3 version, then you can connect a SATA 3 drive to any connector.

So, it doesn’t matter because all the connectors have the same speed. You can connect the hard drive to any SATA connector, provided you specify the drive you want to boot from in the BIOS.

Most modern motherboards that are available today come with SATA 3 connectors while most hard drives support SATA 3 interface.

In contrast, things get a little different if the motherboard is an older model (probably around 4-5 years or more). In that case, you will find a mix of SATA 2 and SATA 3 connectors or without the SATA 3 connectors. While connecting a SATA 3 hard drive, make sure that it plugs into the SATA 3 connector to get the maximum speed of 6 Gb/s from the interface.

If you connect the same drive to a SATA 2 connector, your drive will work but at half the speed of the latest interface i.e. 3 Gb/s. In that case, you won’t get the maximum benefit out of the new drive.

We emphasize here that a motherboard’s manual plays a key role in determining the SATA ports along with their versions. You can also identify SATA ports by their color-coding.

Does it Matter for Multiple Drives?

Chances are you also use multiple hard drives such as an SSD for booting and an HDD for storing your data. In this case, you can utilize any port as long as both the drive and port have the same SATA version.

Then you can specify from which disk to boot by modifying the boot order in the BIOS. This will allow you to use multiple drives. Most motherboards will detect if a SATA port is occupied by a drive and this will show up in BIOS.

A Brief Overview of SATA

You will find a variety of computer products that are specified as SATA devices and these include SSDs, HDDs, and CD drives. SATA stands for Serial ATA and is an interface to connect these drives to the computer’s motherboard.

SATA is the successor to the earlier Parallel ATA (PATA) standard. Today SATA has become the dominant interface for storage devices. To connect them to the motherboard, two ports are used: one is located on the drive and the other one on a motherboard.

There are three versions or generations of SATA interface: SATA 1, SATA 2 and SATA 3. SATA 3 is the current and the fastest of all with a speed of 6 Gigabits/s (Gb/s). SATA 1 and SATA 2 runs at 1.5 and 3.0 Gb/s respectively.

What is a SATA Port on a Motherboard?

In broad terms, SATA includes two ports that are data connector and power connector. For the connection to be established, separate cables for data and power are used.

A SATA connector on a motherboard typically appears as a seven-pin L-shaped connector.

The Color Coding for SATA ports

While opening the case of your computer you might have observed that there are different colors for SATA connectors. Primarily this depends on the SATA generation.

You should note that SATA connectors don’t need to have these colors. Different colors can be used for SATA connectors according to their different versions. This depends on the motherboard’s manufacturer.

You can consult your motherboard’s manual to find the number of SATA 2 and SATA 3 connectors they have along with their colors.

Building a desktop computer or upgrading the hard drives has become a common exercise that people perform themselves. So, it’s crucial to understand which SATA port to use to connect the drives to your computer’s motherboard.

We recommend that a SATA 3 hard drive that is available today should be connected to a SATA 3 port on the motherboard. This would make sure you get the maximum benefit from the hard drive and the SATA interface.

Note that you may also find an eSATA (External Serial ATA) port in motherboards that allows for connecting external hard drives to your computer. They work at the same speed as internal SATA drives.

By now you probably should have a better idea of the solution to the question, does it matter which SATA port I use.

Though the SATA interface provides backward and forward compatibility, we recommend connecting a drive to a port of the same generation for optimal performance (for example a SATA 3 drive to a SATA 3 connector on the motherboard).

As the ports vary from one motherboard model to another, finding it out through your model’s manual would give you a clear picture.