How to Connect a SATA Hard Drive to IDE? – 2 Methods

This can be done through the use of SATA to IDE bilateral card and a USB-based SATA converter. The former attaches to an IDE port on one end and a SATA drive on the other making use of a SATA data cable and a floppy drive power cord. The latter connects to a SATA drive on end through a 22-pin connector on end and the USB port on IDE based computer on the other end.

We will look over these accessories more and also explain the importance of having them.

We will also explore in detail about how to connect the SATA drive to IDE using different methods.

How to Connect a SATA Hard Drive to IDE?

IDE stands for Integrated Drive Electronics and is the previously used interface to connect hard drives to the computer. It’s more commonly known as PATA (Parallel ATA) and uses a 40-pin ribbon cable that has three connection points. One end is connected to the motherboard while the other two are open for connecting two hard drives to a computer.

Serial ATA or SATA replaced the old IDE interface and is now widely used to attach hard drives to SATA based motherboard in your computer. It makes use of a seven-pin data connectors which has two connection points. One plugs into a SATA drive and the other attaches to the SATA port on the motherboard.

As you see, an IDE based motherboard may not have SATA ports. Therefore, you may like to know the different ways through which you can attach a SATA hard drive to your IDE based computer.

This can be done and there are different accessories for this purpose that include a SATA to IDE bilateral converter and a USB based SATA adaptor or converter. All these provide you the functionality to connect SATA drives to IDE based computer.

We will have a look at each of them below:

1. Through a SATA to IDE Bilateral Card

A SATA to IDE/PATA bilateral card (also known as a bridge or converter) is a convenient way to connect a SATA hard drive to an IDE based motherboard. The card is readily available both offline and online at a cheap price. It has connectors for both the SATA and IDE interface while the package also usually comes with a floppy drive power cord and SATA data cable.

Basically, the card converts a SATA drive to an IDE drive and vice versa. Here is the procedure as to how you can utilize the card:

Note that this handy accessory is easy to install, and no driver is needed.

Also Read: How to Tell if a SATA Cable is 6Gb?

2. Through a USB Based SATA Converter 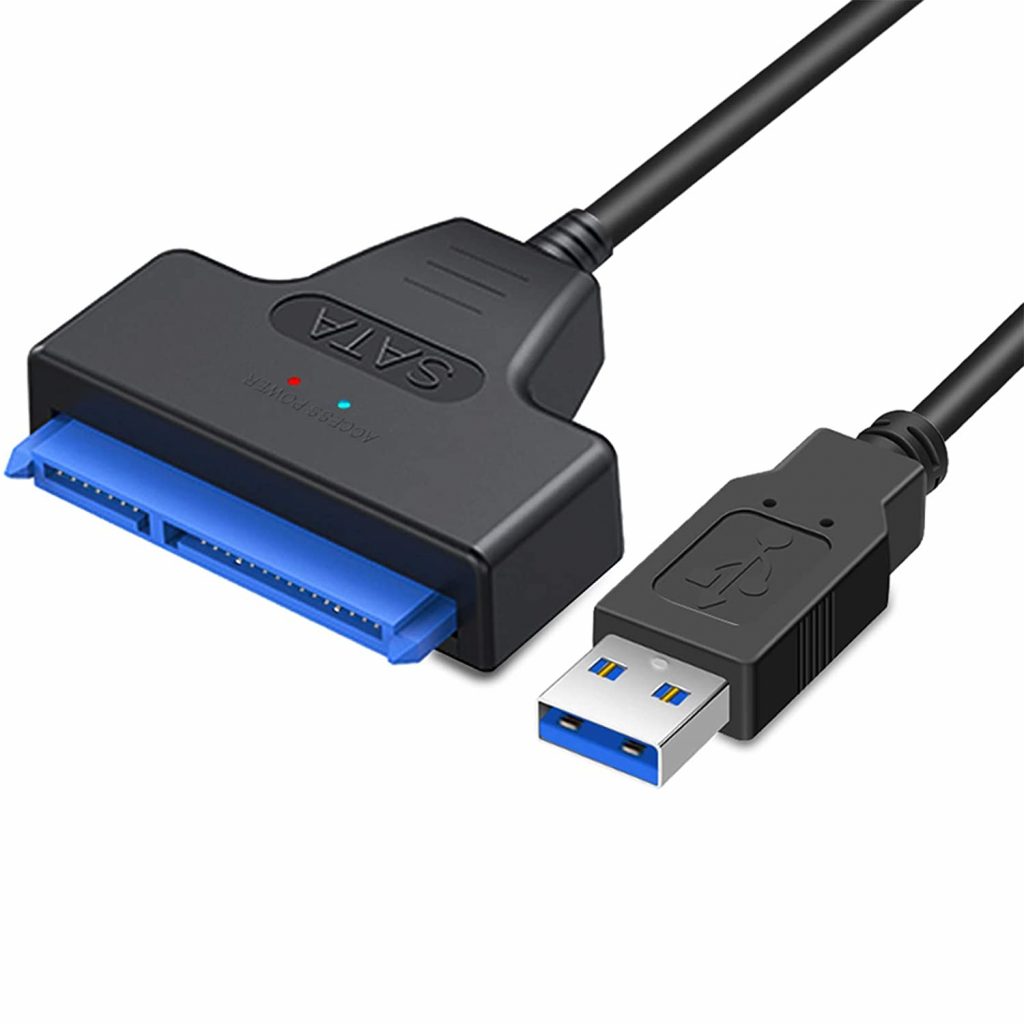 Another way of connecting a SATA drive to an IDE based computer is through a USB based SATA converter or adaptor.

If your desktop computer doesn’t have a SATA port, then you can use it to access the data on your SATA hard drive. It works for both desktop and laptop SATA hard drives.

The accessory functions by attaching a combined 22-pin connector on one end of the adaptor to the data and power connector on the SATA drive. The next end plugs into the USB port of your computer.

Note that some of these SATA converters come with their power adaptor that plugs into an AC outlet. This is because electricity has to be provided for a stable operation to power desktop SATA hard drives so that it can be connected to your computer. Concerning laptop SATA drives, USB power is enough to run them.

Note that these adaptors require no installation of drivers. Some adaptors provide a data transfer speed of up to 6 Gb/s that’s equivalent to the SATA 3 version. Others have a transfer speed that is around that of SATA versions 1 and 2.

Why Connect a SATA Hard Drive to IDE Based Computer?

There can be many reasons why you want to attach your SATA hard drive to a computer that comes without any SATA port.

For instance, if you still use an IDE based computer and you want to connect a new SATA drive to it, you will need a SATA to IDE bilateral card. You can use the same drive as an external one by using the USB based SATA converter. It would eliminate the need for installing the drive as an internal one.

If you have an existing primary IDE hard drive, then you can make a SATA drive hard drive as a secondary one by connecting through the bilateral card. The USB adaptor offers the option to connect the drive when you need it and access data from it. You can use it even in your new system with USB ports.

You can further use the SATA drive as a backup drive and move data between the primary IDE hard drive and the same secondary SATA hard drive.

By now you should have a clear idea as to how to connect a SATA hard drive to IDE based computer.

While SATA is mostly the interface used today, it may still be worthwhile to know about it, especially if you own an older system.

A good idea is to keep both the accessories i.e. the SATA to IDE bilateral card and the USB based-SATA adaptor on hands.

Choose a quality accessory from a known manufacturer as many of them are available at a very cheap price.